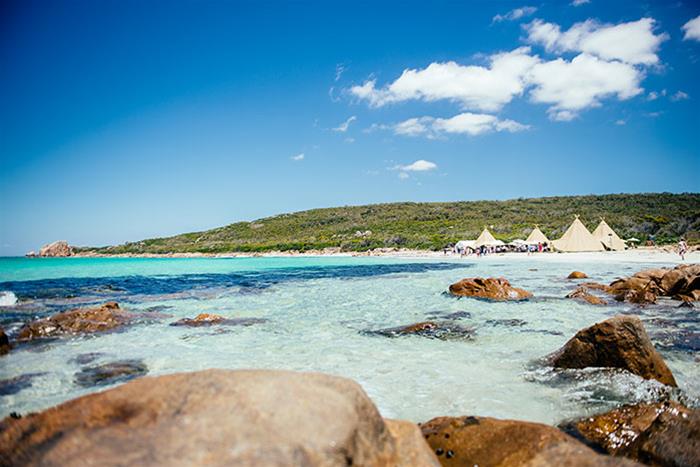 6 Oct, 2014
Web
Hope you’re hungry and thirsty: this November, Margaret River is once again hosting some of the world’s biggest food and drink names.

It’s hard to believe the inaugural Margaret River Gourmet Escape only took place in 2012, such is the festival’s standing in local and international food circles.

Its success, however, isn’t hard to fathom. A weekend in Margaret River filled with postcard-perfect beaches, tremendous eating and world-class wines – what’s not to like? The presence of a battery of internationally renowned chefs doesn’t hurt, either. Although the festival program comprises various dinners, barbecues and tastings, the heart of the event is the Gourmet Village, a pop-up Disneyland for eaters and drinkers taking over Leeuwin Estate for the weekend.

“It brings a lump to your throat,” says The Fat Duck’s Heston Blumenthal, of the local and international talent assembled at last year’s event. “The atmosphere, the spirit, it’s just fantastic. Honestly, I don’t think there’s another food event on the planet like this.”

As well as a surfeit of international talent – at the time of writing, Heston was bringing along two of his head chefs, while Massimo Bottura from World’s 50 Best Restaurants’ third-ranked restaurant, Osteria Francescana, was also set to attend – the event also features some big-hitting Australian names, chief among them Quay executive chef, Peter Gilmore. “Out of all the food festivals I’ve been to, the atmosphere there is one of the best,” says Peter who, among other things, will be cooking with Massimo at Vasse Felix. While the festival offers plenty of opportunities to play spot-the-television-personality, the entire line-up sports serious firepower. Sure, not everyone has the same profile as the Hestons, Georges and Guillaumes, but they’ve recruited exceedingly well for this year’s program.

For instance, although René Redzepi from Copenhagen’s Noma won’t be reprising his visit to the 2012 festival, many Noma alumniwill be in attendance, most notably former chef de cuisine, Matt Orlando.

“I was running Noma when René went a couple of years ago,” says Matt, now in charge of his own highly regarded Copenhagen restaurant, Amass. “He came back and was blown away.”

Ben Greeno, chef at Sydney’s Momofuku Seiobo and also a former member of the Noma kitchen, is one of many keen to check out Matt’s cooking.

“I think his restaurant is the most exciting place happening right now and I can’t wait to get over there,” says Ben. Although there’ll be more guest chefs than you can point a stick of butter at, don’t think the local contingent will be playing bridesmaid. With El Publico’s Friday night dinner at Eagle Bay Brewing selling out in 15 minutes, there seems to be just as much love for the home team.

While many of the big-ticket events have sold out, it’s worth keeping an eye on the website because new events and names get added to the bill. However you plan your escape, this much is certain: come hungry, come thirsty and come prepared for a really, really good time. Whether you’re a first-timer or Gourmet Escape veteran, the following will help you make the most of your festival experience.

Plan the day
As well as being distributed during the weekend, the event program will be uploaded to the Gourmet Escape website (gourmetescape.com.au) beforehand.

Organise transport
Taxis are rare in Margaret River so either nominate a skipper or book a seat on one of the local bus services. Gannaways (gannaways.com.au) will be transporting people to the satellite events while South West Coach Lines (transdevsw.com.au) will be servicing the Gourmet Village.

Drink water
Staying hydrated is vital, especially if consuming alcohol. Fortunately, the offer of free water throughout the village makes keeping up your (non-alcoholic) fluids easy.

Dress smart
Heels might be de rigueur for the big dinners, but not when it comes to walking on grass all day at the Gourmet Village. Don’t forget your hat, sunblock and sunnies.

Extend your stay
Not only will you miss the Sunday afternoon traffic back to Perth, but you’ll also have extra time to explore the southwest. It’s win-win.