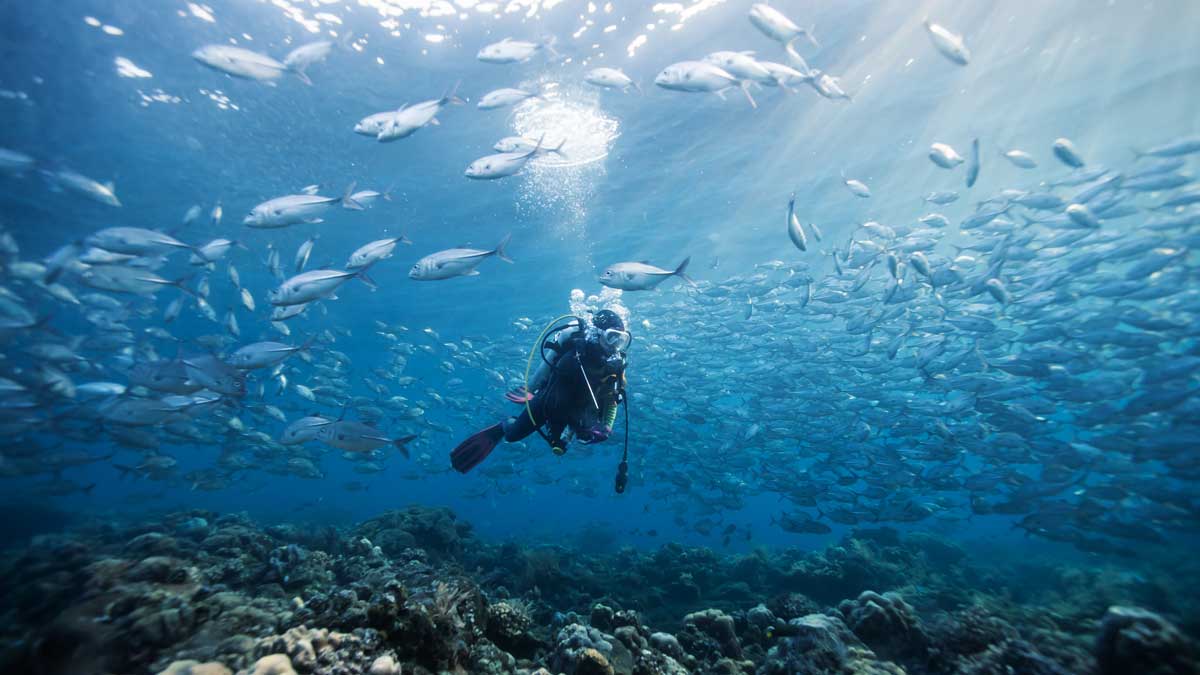 
Drift weightlessly in an underwater wonderland of colourful coral gardens and curious fish. There’s spectacular marine diversity for divers in WA, from wrecks in the southwest, to the world-renowned Ninglaoo Reef in the north, with fascinating marine creatures to be discovered.

Divers will go mad for WA, with so many untouched reefs yet to be explored. The archipelagos and islands, with their coral atolls and numerous marine creatures, provide some of the best dives the world.

Busselton Jetty is 2km long and originally built in 1865 to service whaling ships. Now, it’s one of the best dive sites in WA. With a maximum depth of only 8m, the site is ideal for beginner and experienced divers.

Under the water, sunlight beams dance among the ancient pylons, and if you keep your eyes peeled you’ll spot wonderful hidden creatures including starfish, octopus and crabs. The jetty can be dived either through one of the local outfits such as The Dive Shed, or by catching the train along the jetty and entering the water off the dive platform near the end.

As a dive destination, the Cocos Islands ticks all the boxes, water temperature between 26 and 29 degrees, average visibility of 25m, more than 25 uncrowded, regularly dived sites including wrecks, reefs, caves and drop-offs and 1550 species of sea creatures. Imagine plunging into the open Indian Ocean and coming face-to-face with a speckled, whale shark. It’s possible each March to July, at the stunning heritage-listed Ningaloo Reef, off the coast of Exmouth.

The region has become one of the world’s most reliable destinations for whale-shark encounters, thanks to the annual coral spawn that enriches the waters with plankton for the whale sharks to feed on. These gentle giants can be up to 12m, weigh 20 tonnes and reach 100 years old; snorkelling alongside them is one for the top of the bucket-list.

If you’re lucky, you’ll have long swims with multiple whale sharks on your tour – enough time to take in the dot painting-like pattern on their thick skin and their tiny dark eyes that seem to peer back at you just as curiously as you look at them. WA is blessed with several underwater caves, including the jewel of Australian cave diving, Cocklebiddy Cave on the Nullarbor Plain. Recently the cave was named as one of the top 10 dive locations in the world, and with good reason, divers describe it as so clear you won’t even realise you’re underwater… it’s the closest experience to space travel you’ll get. The cave stretches 6.5km and is the longest underwater passage in the country. The Swan Valley is still the easiest option for a stress-free luxury weekend escape to country. The region was settled immediately after the colony was founded in 1829 and as WA’s oldest wine-growing region, there is an abundance of stunning wineries and history to be enjoyed. And while you are there, why not stay in […]