Dotted across Western Australia, grain silos are a symbol of our proud agricultural roots. These huge structures are often bare and described as an eye sore. But with the talent and vision of Australian and international artists many silos have been transformed into massive canvases, showcasing a mix of Australiana and more abstract depictions. 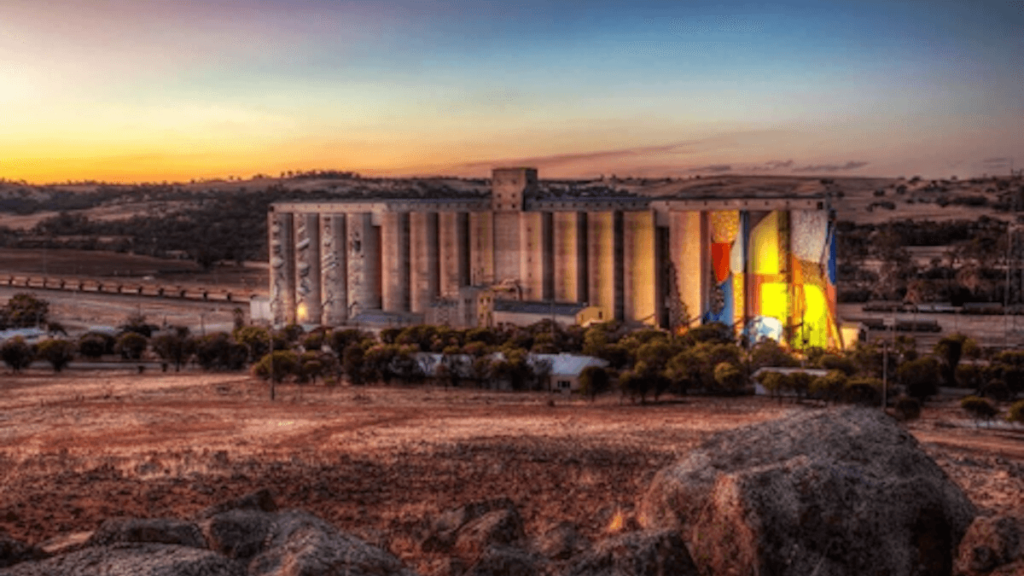 Colloquially known as Silo Towns, these six murals can be found in Albany, Merredin, Newdegate, Northam, Pingrup and Ravensthorpe. The silos are located a fair distance from Perth but can be enjoyed as trails, perfect for a long Sunday drive or weekender. 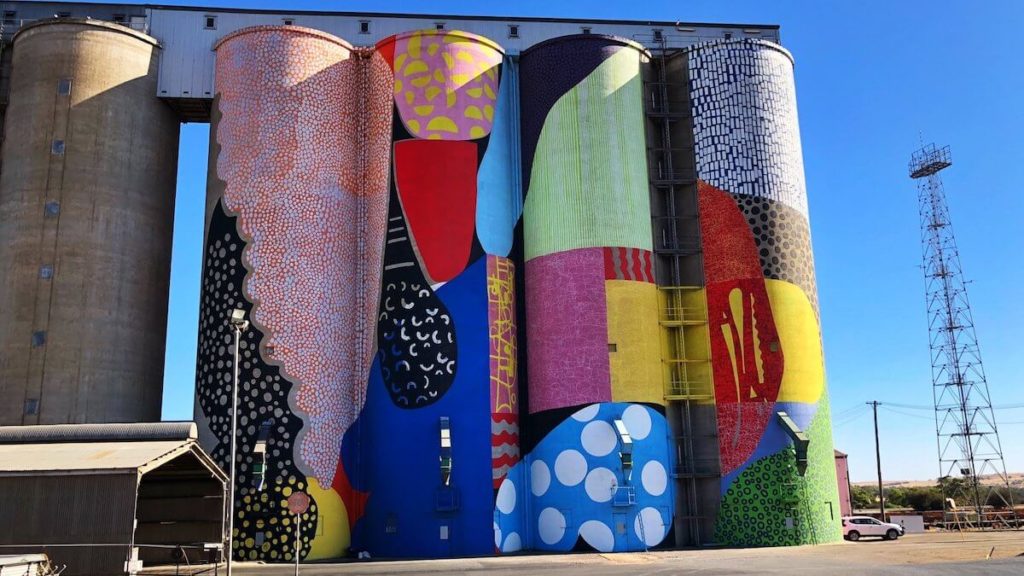 Located around one and a half hours north east of Perth, Northam is the largest town in the Avon region. For any adventure seekers Northam is a great place to go gliding and paddling. Well known for his unique figurative and abstract works, the Merredin mural is the work of Western Australian artist Kyle Hughes-Odgers. The artwork tells a story about Merredin, showcasing its diverse community, agricultural history and colourful natural environment.

A two hour drive east of Northam, Merredin is a historic town with several heritage walks and tours on offer. The town also houses an impressive military museum. 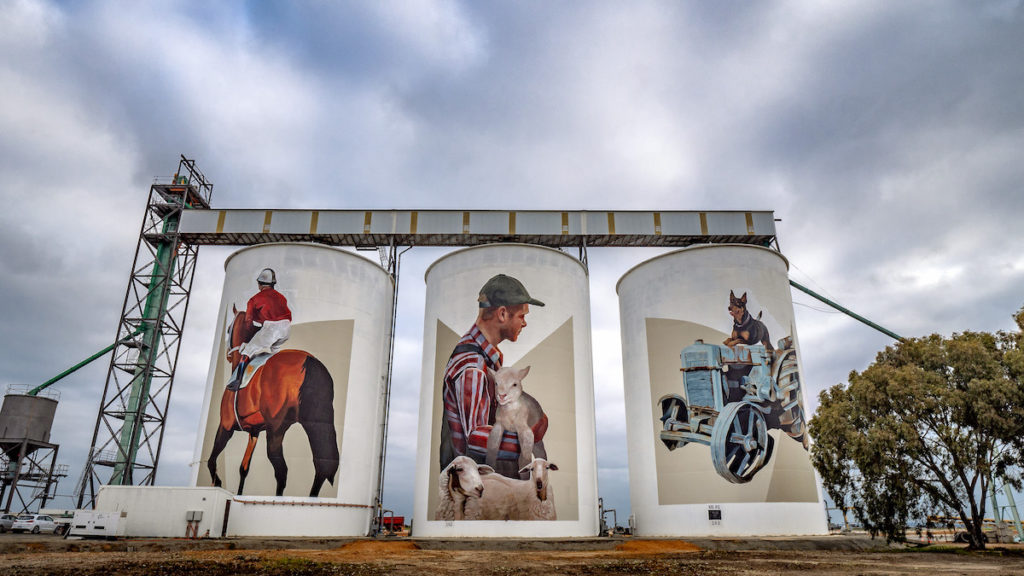 Figurative depictions of everyday life in Pingrup are featured on the murals, from a precise replica of a tractor located on the Main Street of town to the iconic Pingrup races, Merino sheep and locals. Dominican-born artist Evoca1 is one of America’s leading photorealists and his work truly tells a story about the character of the community.

Four hours south east of Perth, the picturesque town of Pingrup is surrounded by natural beauty. While in the area you can explore Chinacup Nature Reserve and Lake Magenta Nature Reserve. 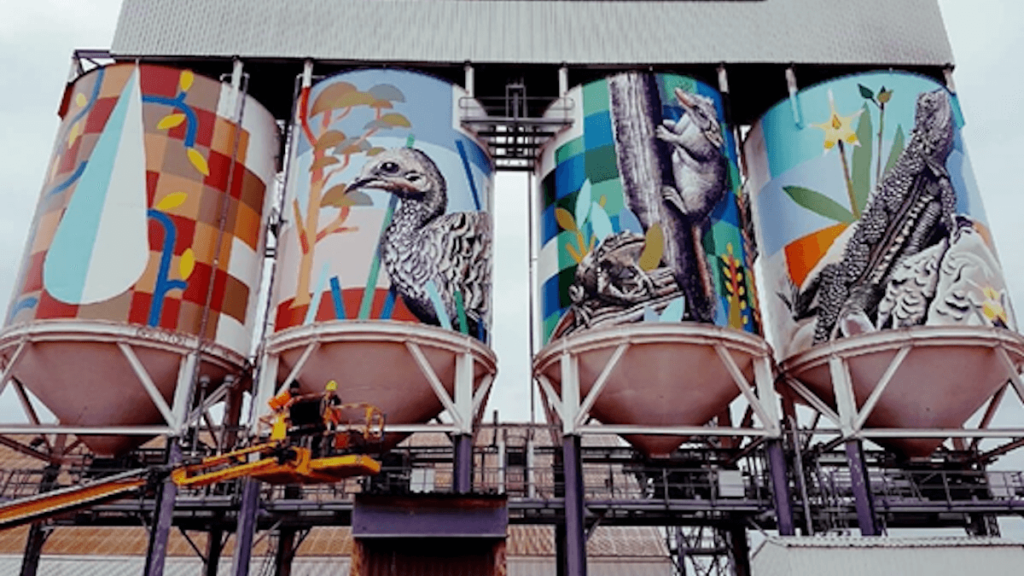 Perth artist Brenton See trained first as a graphic designer, then spent eight months learning to be a tattooist. His work is characterised by the use of bright colours, geometric forms, and elegant, refined animals. The mural depicts rare local wildlife; a Malleefowl, Western Bearded Dragon and Red-tailed Phascogale.

Newdegate is located around fifty minutes east of Pingrup. The Newdegate Pioneer Museum houses a collection of photographs, historical objects and musical instruments from times of early settlement. Just under five hours south of Perth, Albany is a coastal paradise. Known for its stunning seascapes and moving War Memorial this town is a must stay for anyone travelling our south coast. 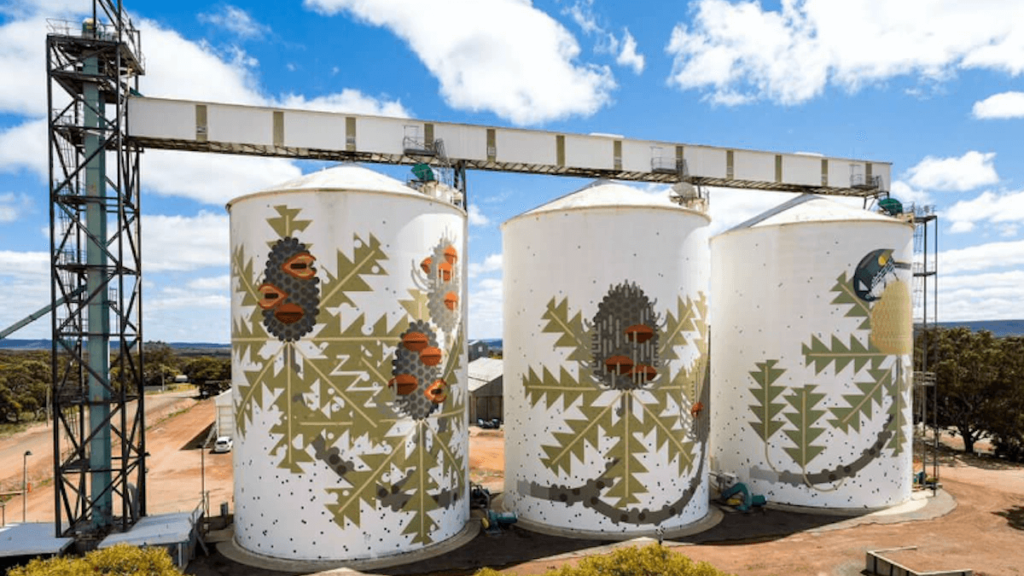 Artist Amok Island is originally from the Netherlands and is now based in Fremantle. This mural is a representation of the rare Banksia found only between Esperance and Albany. Island’s work is heavily inspired by scientific illustrations, with the bold lines and edges showcasing his skill and precision. you can also spot the main pollinators of the rare Banksia, a Honey possum and New Holland Honey Eater.

Approximately three and a half hours north east of Albany, Ravensthorpe is just forty kilometres inland from the south coast. For history buffs the must-see Kukenarup Memorial is a moving tribute to the local areas past.

*Updated by Nic Hassinger A 30 minute drive can take you from your house to work on an average day. 30 minutes could get you from the CBD to Fremantle if your traffic odds are good. Those same 30 minutes can take you across the gage road to Rottnest Island. The best part is you […]

Each year in May, Broome transforms into one of Western Australia’s most popular tourism destinations with warm weather and cloudless days providing a welcome relief from the southern winter cold, perfect for lounging around the pool and long swims at the beach. Starting in November, the wet season returns, the tourist leave and Broome transform […]

The Lester Prize is one of Australia’s three leading art awards for portraiture and the only one based in Western Australia. Out of 750 applicants, only 40 finalists are selected and put on display at the Art Gallery of WA from October 16 to November 29. As part of this year’s exhibition, Oh Hey WA […]