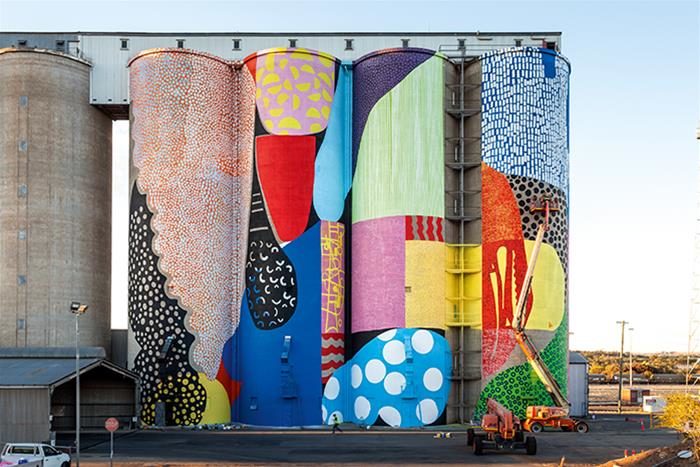 29 Mar, 2016
Web
Western Australia’s regional towns boast some of the most immersive, supportive and cultural arts communities in the world, a fact that’s attracting international talent.

From hay bales in the Wheatbelt and red dirt in the Pilbara, to never-ending vineyards in Margaret River and eight-foot surf in Yallingup, it’s easy to see why local and international artists are drawn to Western Australia’s regional locations.

Many, like US artist HENSE – who, with fellow creative Phlegm, painted eight giant grain silos in Northam back in 2015 – have returned, with some even calling these places home. So what exactly is keeping them here?

“Western Australia’s regional towns tend to have strong, tight-knit arts communities,” says Andrew Nicholls, curator for FORM, the arts organisation that has brought HENSE, Phlegm and many more to regional WA. “Through our studios and galleries in Port Hedland (including the Spinifex Hill Studios that we manage
in South Hedland) we’ve seen the community increasingly supporting their local Aboriginal artists. Alongside the tourist market, it has been a pleasure to witness locals and FIFO workers emerging as avid and sophisticated collectors of Aboriginal painting, as mementos of their time in the remote northwest.” 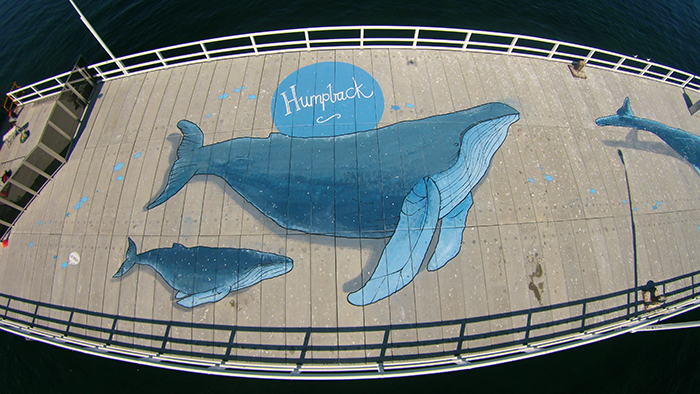 Nicholls says FORM’s programming in the Pilbara over the past decade has seen a solid photography community emerge, as well as some really interesting young artists who specialise in drawing. The Goldfields and Pilbara are home to a number of Aboriginal creators who specialise in internationally regarded weaving, basketry and fibre sculpture, while beyond the northwest, both Albany and Kalgoorlie-Boulder have always been centres for textiles.

“Albany has a strong painting community,” says Nicholls, “and the annual Albany Art Prize is a highlight of the state’s art-prize calendar, inviting leading painters from across Australia to submit works each year.”

Then there are the state’s southwest locations. “There are at least 250 practising artists in the Margaret River/Busselton region, the most professional of whom (perhaps 80 or so) show at one or other of the excellent commercial galleries in the region or in Perth,” says Margaret River Regional Open Studios (MRROS) chairman Dr Bill Castleden. “Some of these have grouped together to form the well-established Margaret River Artisans.”

This group, along with MRROS and other arts initiatives, presents a nurturing and supportive environment that Dr Castleden says allows young, emerging artists to get a leg up in the industry. 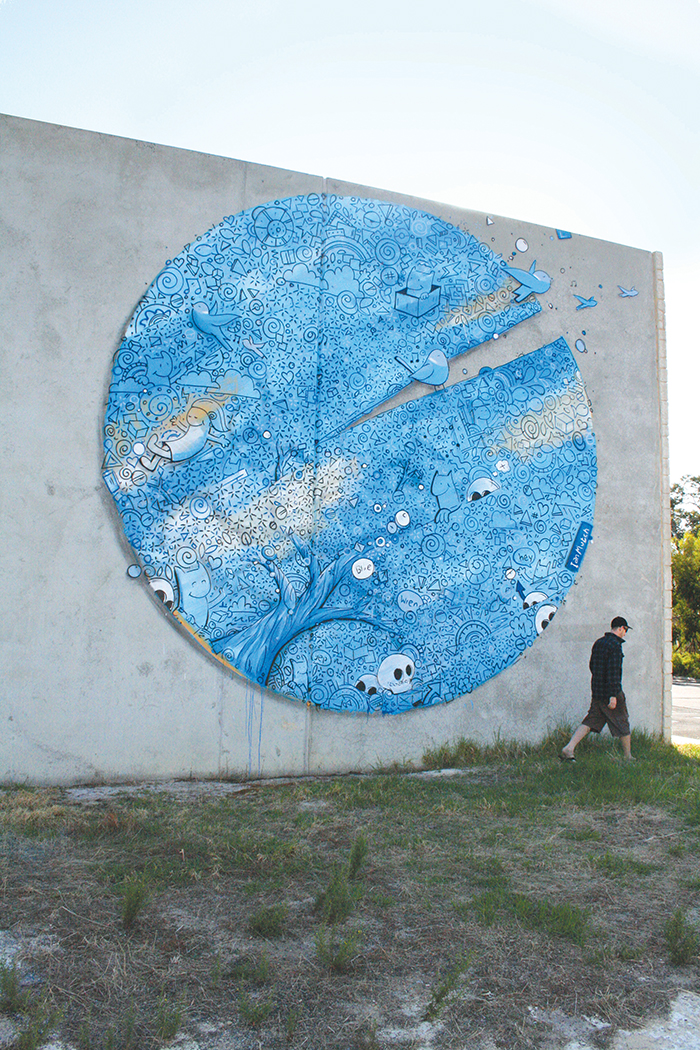 “Open Studios provides them with a new opportunity to show their art and to connect with a new public,” he says. “It gives members of the public a chance to meet an artist and to engage with the artistic process in a much easier and less-threatening way than that provided by a commercial gallery space or public art gallery.”

Dr Castleden says the overall mission of the likes of MRROS is to try to extend art into the community at large.

“In the past four years, since I have been very involved with MRROS and with Arts Margaret River at the Cultural Centre, I think there has definitely been an expansion of art-interest in the community as a whole,” he says. “Last year, MRROS’s 100 or so artists reckoned they met with 22,000 or so members of the public.”

Dr Castleden says the southwest is a nurturing area for artists, as seen through the vast number of art courses and artist-run workshops popping up at the area’s TAFEs and artist studios.

“There’s more and more happening down here in terms of art collectives and networks, which is great,” says Dunsborough street artist Ian Mutch.

“The Competition and PechaKucha nights in Dunsborough come to mind, Mixtape Creative in Margaret River, and Maker + Co and Re.Discover in Bunbury.

[Collaborative network] The Creative Corner is also working to link together different groups and increase opportunities in the southwest for a range of artists, and they run Emergence Creative Festival.”

Mutch, who moved to the coastal location more than 10 years ago, says the southwest is a pretty good destination for art in terms of galleries, sculpture, great photography and film.

“Moving outside of traditional practices and galleries, public art and mural work seems to be a growing movement.” 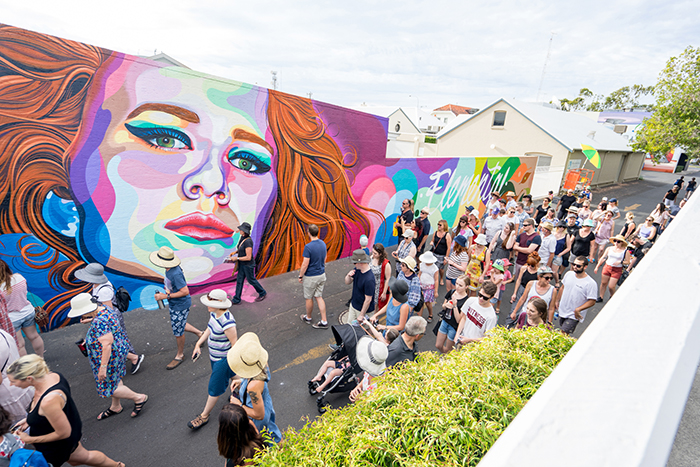 Mutch says public artworks raise discussion in communities and can bring the artists and the public together, something that Re.Discover Bunbury founder Andrew Frazer recognises.

“Because larger cities attract large events, the community can at times become numb to the beauty of what’s taking place,” he says. “In regional cities, we may not receive as many large events but, when they do come, we embrace them with a deep sense of personal ownership. This isn’t a conclusive comment, but rather an observation after living in larger and smaller cities over the last 10 years.”

For Frazer, Bridgetown, Cowaramup and Denmark are particularly engaging arts zones. “I’m always inspired when I visit these communities because of their local passion,” he says. “There are often workshops, events, gallery showings and engaging exhibitions taking place that are breathtaking.”

Brought up in Bunbury, Frazer says he’s been able to learn from and observe many inspiring artists who have contributed the town’s arts scene. It’s something he’s continued to do with his Re.Discover program, which has seen a number of artists paint murals around town.

“What we have found in Bunbury is that the exterior wall murals created through Re.Discover have caused people to pause, reflect and share,” he says. “We talk about knowing our neighbours and building a ‘sense of belonging’, yet many of us don’t know how to even start a conversation with a stranger.

“The murals are beautiful in their own right, but in many ways they have become a catalyst for something deeper,” Frazer says. “Art has built (and continues to build) bridges between people so that we can know each other in a more connected way through shared stories.”