If the term ‘aboriginal art’ brings to mind galleries, art fairs and exhibitions, why not take your experience to the next level? Consider a gallery set in the sweeping landscape of northern Australia, featuring Indigenous rock art that has survived an ice age.

From the Wandjina and Gwion Gwion (or Bradshaw) paintings of the Kimberley, to the etchings of the Pilbara, the sheer timescale of this art will leave you breathless. Tens of thousands of years old, these open-air galleries promise to be the purest experience of Aboriginal art you will ever have.

While many know them as Bradshaw paintings, the Indigenous name for this artform is Gwion Gwion, named for the bird (Gwion Gwion) credited with painting the figures, using blood on its beak. These finely-drawn human figures are distinct from the mouthless, large-eyed Wandjina – the creation spirit also featured in Kimberley rock art.

Jilinya Adventures is a family-run operation. It was launched by Francis Woolagoodja after he saw how much visitors wanted to learn about Aboriginal culture and people, and realised his family of storytellers and knowledge holders could share their heritage.

Jilinya guides are Wandjina people from the Worrorra language group, who see the Wandjina as their god, law-maker and creator. Jilinya offers a mix of land, water and air travel, with exclusive small-group helicopter charters taking you to secret art sites and swimming holes. Wundargoodie proprietors Colin and Maria Morgan offer a spiritual journey into the heart of the remote northern Kimberley. Here you can swim in beautiful, unspoilt waterholes, explore deep gorges and camp out under a million stars.

The Morgans have a passion for sharing the rich and ancient culture of their people and their homeland. Learn about the spiritual significance of Kimberley rock art as they take you through some of the most famous sites and share the dreamtime stories connected to them. Around 200kms west of Port Hedland, Burrup Peninsula has one of the world’s largest collections of petroglyps, or rock carvings. Indigenous artists etched the stones in Murujuga National Park in the Pilbara more than 20 thousand years ago – and with up to a million etchings on the peninsula, the result is an overwhelming array of artworks.

Ngurrangga Tours are run by Clinton Walker, a descendent of the Ngarluma and Yindjbarndi traditional owners of the West Pilbara. He has been through initiation, and spent his life learning the language and traditional ways from the elders in his family.

Ngurrangga Tours mostly operates from Karratha and offers visitors a unique experience of the Pilbara, through the eyes of a traditional owner. ​You can learn about bush foods and medicines, as well as the ancient rock art created by the Yaburrara (Northern Ngarluma) people. Clinton brings the experience alive with traditional stories and songs sung using the wirra (boomerang). Join the traditional custodians of the land on a 90minute rock art tour and cultural experience at Deep Gorge in the Murujuga National Park. Explore Murujuga Rock Art as the guides tell the stories behind the etchings, including the history of the megafauna depicted in the art. Tours run Thursdays and Fridays, leaving from Deep Gorge carpark on Hearson’s Cove Road at 9am.

For more information on rock art, head to the Kimberley Foundation Australia. 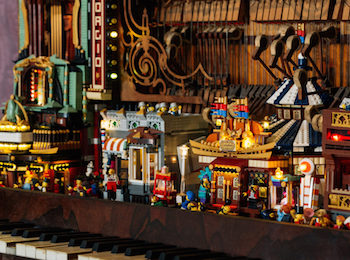 Content provided in partnership with Seesaw Magazine.  What happens when the winners of LEGO Masters Series 2 are commissioned to create an exhibition? Ara Jansen catches up with Jackson Harvey and Alex Towler to learn about the intricate and intriguing world they’ve created at The Goods Shed.   Imagine you’ve been jumped into the year […]