More than 65 different colours were used on the outside of this glass wedding chapel in Shanghai. Kaleidoscope-like patterns of transparent and semi-transparent windows circle the outside of the chapel’s pristine white interior, and let a surreal light into the 390sqm space. A tiered ceiling with downlights provides extra illumination to the area, which contains a small podium and stage. The circular building is set inside a square, semi-open frame, the two basic shapes acting as symbols of fullness, unity, honesty and virtue that, when combined, are believed to provide the place and its occupants with good luck.
COORDINATION ASIA, www.coordination.asia.

Staircases aren’t just about getting from A to B – instead, they can be adapted into creative, open spaces, like this staircase by Paul Cocksedge Studio. The 12.5m American white oak and white steel spiral staircase replaced a load-bearing pillar and traditional staircase design. Found in the middle of Soho’s Ampersand building, it is divided into a series of zones for relaxation, creative thinking and informal workplace interaction. The stairs access a number of floating platforms with seating, enclosed by white balustrading and plants, which line the entire handrail, from the ground to the top floor. Paul Cocksedge Studio, www.paulcocksedgestudio.com. STUDIOSC was given a 929sqm old factory space to transform into a modern office for creatives. The team responded, using materials that would normally be considered trash to create an urban, industrial office that doubles as a community gathering space/hub. OSB board off-cuts, cut and dyed on site, were used for the ceiling, dividing beams, kitchen-wall accents, mosaic wall, and the reception desk. The factory’s old exterior windows were removed and repurposed, and now form the dividing walls and interior lighting sources within the office. The finished design is a reminder that recycled materials can be used to create a standout design, minus the huge budget. STUDIOSC, www.studiosc.net. Designed by Istanbul-based studio Autoban, the new terminal interior at Heydar Aliyev International Airport overturns the archetypal conventions of airports as cavernous spaces, and instead brings the space to life with an intriguing cluster of custom-made cocoons. Varying in size, the large cocoons envelope an array of cafes, kiosks and amenities, and act as semi-private spaces to which passengers can retreat. Each shell is clad in diamond-shaped American white oak pieces to complement the geometric shapes incorporated in other aspects of the design. Autoban was also tasked with designing and furnishing four well-appointed ‘Salam Lounges’ for the exclusive use of business class. Autoban, www.autoban212.com. Constructed within a decommissioned warehouse in Bangkok, Thailand, this contemporary restaurant has the appearance of a human-sized terrarium. The exterior is made of a number of glass panels, and a steel frame that has been painted red masala, effectively creating a giant glasshouse for the greenery found inside. Through the glass, found objects from around the site – including iron doors, steel pipes and tree roots – can be seen, along with living landscapes,
ceramic follies (think white butterflies and plant-shaped pots), hanging pot plants and branches. Hypothesis 30, www.hypothesis30.com; Stu/D/O Architects, www.stu-d-o.com. You’d be forgiven if you thought the Nozomi Sushi Bar was found in the heart of Japan, and not its Spanish location. The restaurant’s interior boasts a medley of traditional Japanese and modern design, achieved through classic Japanese carpentry and contrasting concrete and grey furnishings. From the entrance, guests will draw a likeness to Japanese architecture, thanks to wooden ceiling frames and a clean, crisp and uncluttered look. Completing the experience is a ceiling of cherry-tree flowers – inspired by origami, the art of paper folding – beneath which customers sit, as if in their own Japanese courtyard.
Masquespacio, www.masquespacio.com. The ‘rock crystal’ shape of this building creates an illusion of perspective from every angle, while the dramatic form of the building is part of the project’s integrated sustainable design, simultaneously generating self-shading and reducing peak heat loading. The building itself incorporates a five-star hotel with full conference and meeting divisions, as well as a range of restaurant and support facilities. The design has achieved a two-star Chinese energy rating, which is equivalent to an Australian five-star. LAB architecture studio, www.labarchitecture.com. 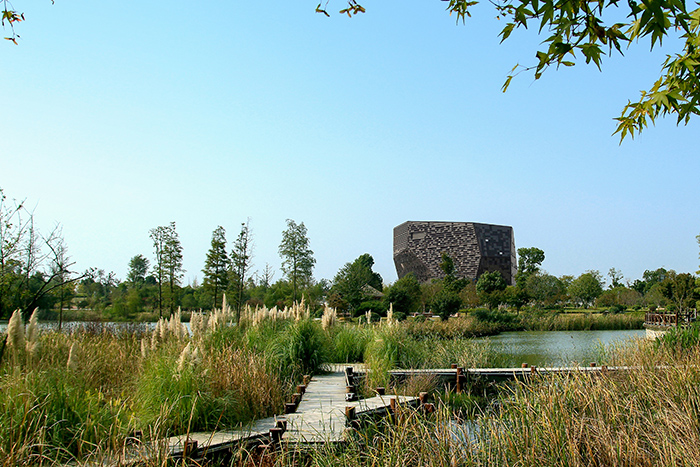 This library in China contains a reading area, meditation space, activity room, bar and a resting zone. Each establishes a distinct relationship between space and ocean, which has been defined by the way light and wind enters each room. Vector Architects gave Seashore Library a definitive sense of place that encourages users to exist in the moment. The relationship between place and experience, therefore, is a comprehensive one, and the public can unwind from city life and relax in the open space. Vector Architects, www.vectorarchitects.com. The contemporary design of the House of Music II in Denmark combines a school and a concert hall with an architectural design that is as fluid and harmonious as the name suggests. The light, natural colours and material exude a calming and symphonic feel for those entering, while the external typology allows for natural light and maximised views. With the concert hall at the centre of the building, the foyer and U-shaped rehearsal and training rooms connect either side. It is just one initiative to transform the urban space in Aalborg into an educational synergy of art and music. Coop Himmelb(l)au, www.coop-himmelblau.at. A number of protruding, colourful cubes make up the facade of this bank. A pastel palette is used on the front and sides of these cubes, which appear like a rainbow to passers by. Small, elevated gardens are built inside 12 of the cubes, which are positioned at varying depths. The greenery extends into the interior, producing a nature-encompassing environment for the bank’s employees and clients. The combination of bright colours and plants that add extra colour when in season, helps produce a fun and light-hearted atmosphere for a traditionally boring institution. Emmanuelle Moureaux Architecture and Design, www.emmanuelle.jp. Standing proud in the heart of Rotterdam, Markthal is the first enclosed food market in the Netherlands. From afar it may seem like just an arch, but the transparent building contains 228 apartments, restaurants, cafes, retail units and an underground supermarket, plus 1200 parking spaces, all under one roof. Its stunning mural, Cornucopia, by artists Arno Coenen and Iris Roskam, is made
up of oversized images of market produce, flowers and insects, and spans a total
surface of 11,000sqm. The high-quality image was rendered with Pixar software and printed on perforated aluminum panels, which attach to acoustic panels for noise control. In contrast, the exterior facade is clad in grey natural stone.
MVRDV, www.mvrdv.com. INK Hotel features two patios that blur the boundaries between inside and out. The goal for the architects was to create areas where both locals and hotel guests could congregate, while maintaining easy access to the shared restaurant and bar facilities found on the grounds. To do this, they widened the entrance and inserted a new alley that connects to the patios and runs between the various sections of the ground floor. The first patio is protected from the elements by a glass roof, which also shows off the historical facades surrounding the hotel. The second patio was left entirely open, allowing daylight to enter the connecting areas. Concrete, www.concreteamsterdam.nl. 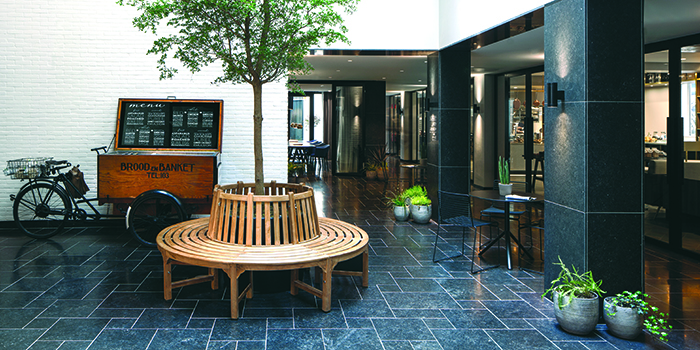 Renovating this luxury lodge proved to be challenging. The original lodge was built 17 years ago and has since been declared a World Heritage site. The architects used biodegradable materials and built the lodge almost entirely of wood, with laminated pine beams that have been waterproofed with an acrylic membrane. It is completely eco-friendly, and 70 per cent of the lodge’s energy requirements are of sustainable origin. The African armadillo was chosen as a motif for the design because of its shy, elusive and harmless nature. Nicholas Plewman Architects, www.plewmanarchitects.co.za. 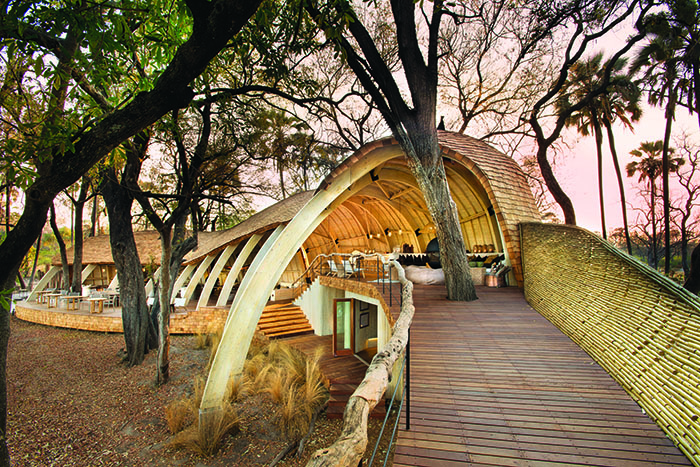 Nanyang Technological University’s brand new multi-use learning hub reasserts the role of an educational building in the 21st century, providing contemporary spaces for collaborative learning in a technology-rich setting. The eight-storey structure, built to accommodate the university’s 33,000 enrolled students, is made up of twelve concrete towers housing a stack of rounded tutorial rooms tapering inwards at the base. At each level, the rooms open onto a communal learning hub, encouraging visual connection beyond the central atrium. To further enhance the centre’s multi-disciplinary purpose, the concrete stair and elevator cores are embedded with 700 commissioned drawings referencing science, art and literature. Heatherwick Studio, www.heatherwick.com. Chef Andre Chiang and WEIJENBERG teamed up to design a restaurant that reflected the chef’s gastronomical imagination as well as the architect’s artistic vision. The result tells a parallel tale about chef Andre’s food and WEIJENBERG’s organically structured wooden interior. The entire project was made in Taiwan, using materials such as local Taiwanese Soft Wood and typical Taiwan louvres. Diners sit at custom-made tables with lighting that creates a stage for the dishes, drawing customers in closer to the centre of the table. The focus is to create intimacy between dining partners as well as the food. WEIJENBERG, www.weijenberg.co. The Investcorp Building for Oxford University’s Middle East Centre at St Antony’s College features a polished stainless steel facade that softly reflects natural light to echo the building’s context. Adding an element of intrigue to the campus’s existing hub of mismatched structures, the building was constructed to provide additional floor space for the Centre’s expanding archive and facilities. Its features include a below-ground 117-seat auditorium ventilated through a thermal labyrinth, archive and library reading rooms, a gallery, and storage facilities for centre resources. To ensure documents were preserved in a temperature-controlled environment, a ground-source heat pump was installed. A drainage system is appointed below the foundation slabs to provide sufficient moisture to surrounding trees. Zaha Hadid Architects, www.zaha-hadid.com. Overlooking Lake Huron, this spectacular sauna pays homage to its serene surrounds, combining old-world craftsmanship with new-world sustainability and design. The structure, which draws inspiration from an Italian-style grotto, is carved into an historic large-scale rock formation at the water’s edge, sheathed in charred cedar for a weathered appearance.  Internally, the space is clad with curved wood panels, to emulate the lake’s gentle waves. Two high-performance ovens were introduced as a heat source, with vents and fans to promote airflow, while reducing the threat of rot and mould. Double and triple-glazed, high-efficiency annealed glass was then employed for the windows to give an energy-efficient and durable finish. PARTISANS, www.partisanprojects.com. The striking interface of this French museum was inspired by the superposition of two complex architectural units: crystal and cloud. The cloud structure floats on pillars and contains a sequence of black boxes that admit no daylight, making it optimal for exhibitional design. By contrast, the crystal functions as a transparent urban forum that faces the city, inviting visitors. The building is intended as a “medium for the transfer of knowledge”, stimulating public curiosity. Coop Himmelb(l)au, www.coop-himmelblau.at. It’s two centuries since the release of the kaleidoscope… now the childhood toy
has become the key reference for this hotel’s brand-new leisure area. A former squash court, the space was transformed into a colourful playground housing a series of rooms that connect to a life-sized kaleidoscope. The 9m mirrored hexagonal tube evokes a sense of discovery in the children, generating a sequence of optical effects influenced by external elements, natural light and occupants on the move. A2arquitectos continued this theme in the rooms beneath, encouraging the children to respond to various sensory experiences, whether a variance in texture, colour or reflection. A2arquitectos, www.a2arquitectos.com. 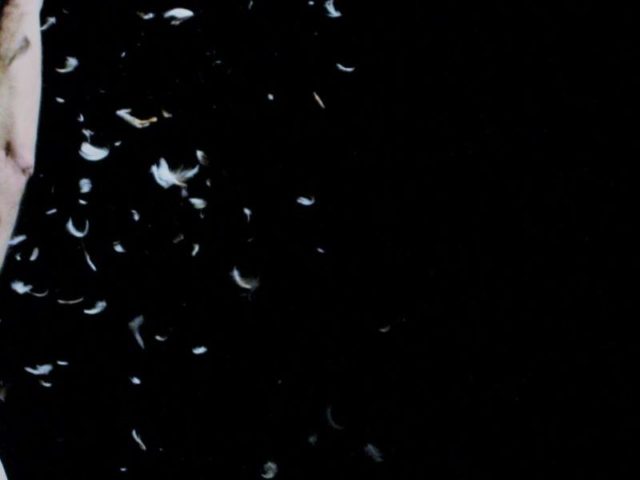