Sculpture by the Sea, Cottesloe’s iconic annual outdoor sculpture exhibition, opens today (March 5) for its 17th year. Local artist Jarrod Taylor has been announced as the winner of the prestigious Western Australian Sculptor Scholarship worth $10,000.

Alongside 11 interstate and 25 international artworks, 34 WA artists will showcase works this year, with the exhibition running March 5 – 22.

Taylor’s 8-metre high sculpture, ‘Structural Wave’, is made of scaffold and weighs approximately six tonnes, looming over the end of the groyne on Cottesloe Beach. The artwork represents humankind’s ever-growing imposition of itself on the land. Surging into nature’s unknown, ‘Structural Wave’ is reaches out from the earth towards the sea. 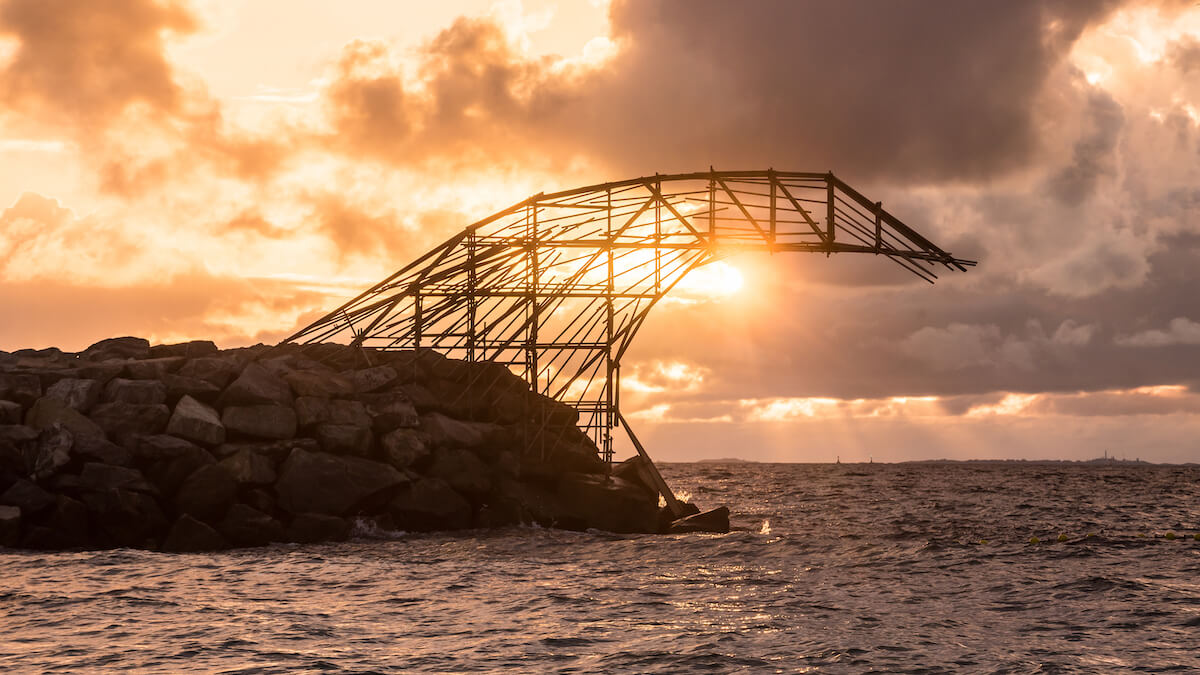 Taylor expressed his gratitude to the Sculpture by the Sea team and donors, saying that it was a great honour to be selected as the scholarship recipient.

“This will allow me to develop future works that were only dreams and concepts prior to getting this award,” he said.

Taylor studied Fine Art at Claremont School of Art, with a major in sculpture. Although he has extensive experience working with a range of mediums including wood, stone, steel and resin, large-scale formal scaffolding installations are his speciality.

“Finding artistic inspiration within scaffolding could be considered unusual. Rather than just structural boxes, it can be a versatile, formal medium achieving curves and defying gravity. ‘Structural Wave’ captures this dynamic momentum.”

This is Taylor’s third time exhibiting at Cottesloe’s Sculpture by the Sea and his work has been shown in the Bondi exhibition twice.

Presented by Chairman of Tourism Western Australia Nathan Harding and donated by Gavin Bunning AM & Julienne Penny since 2013, the scholarship aims to support the advancement of the artist’s career, including the opportunity to travel and study their craft. 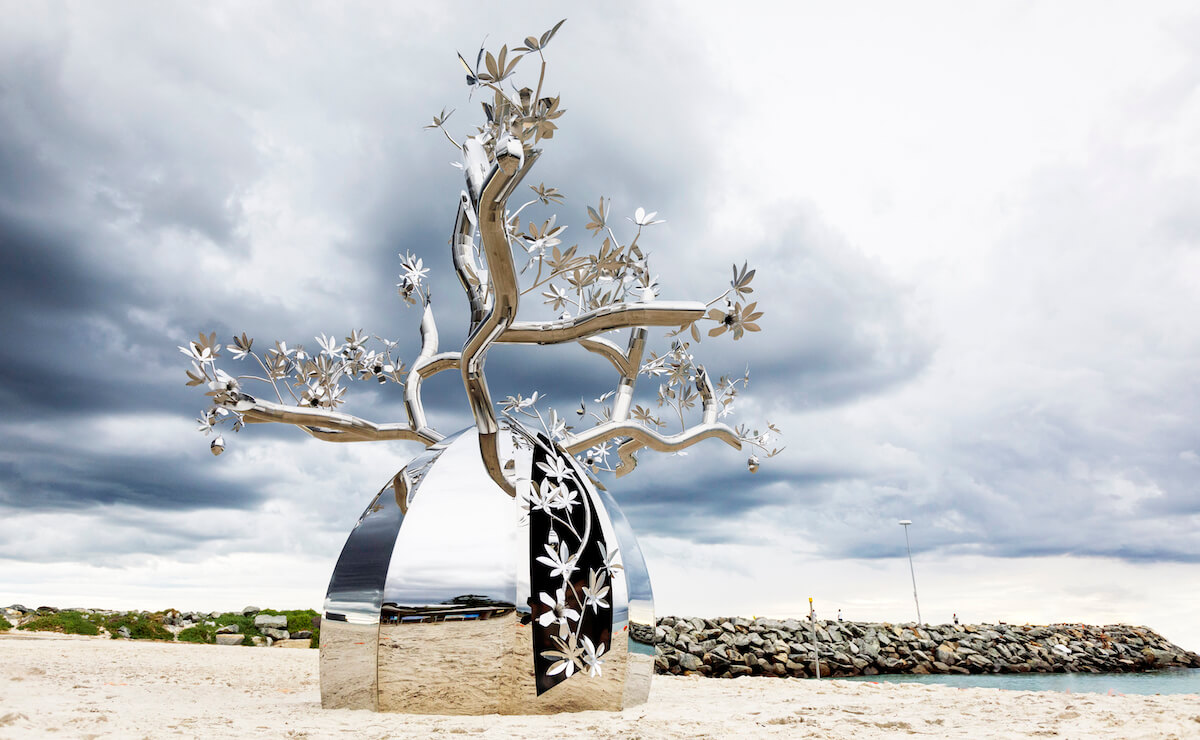 Founding Director of Sculpture by the Sea, David Handley said, “What an artwork! What an artist! Scaffolder by day, artist by night. Quite frankly I think Jarrod is a bit of a legend. This is his third work at Cottesloe in three years and they have all been fascinating.”

The newly created WA Emerging Artist Mentorship of $15,000, funded by the George Hicks Foundation, was awarded to Gwilym Faulkner for his work, ‘Yang-Yin’; two 3m-tall structures made from aluminium and rope. They represent two bodies in unison and contradiction with the other and are inspired by the Chinese yin-yang philosophy and the idea of shared biology. 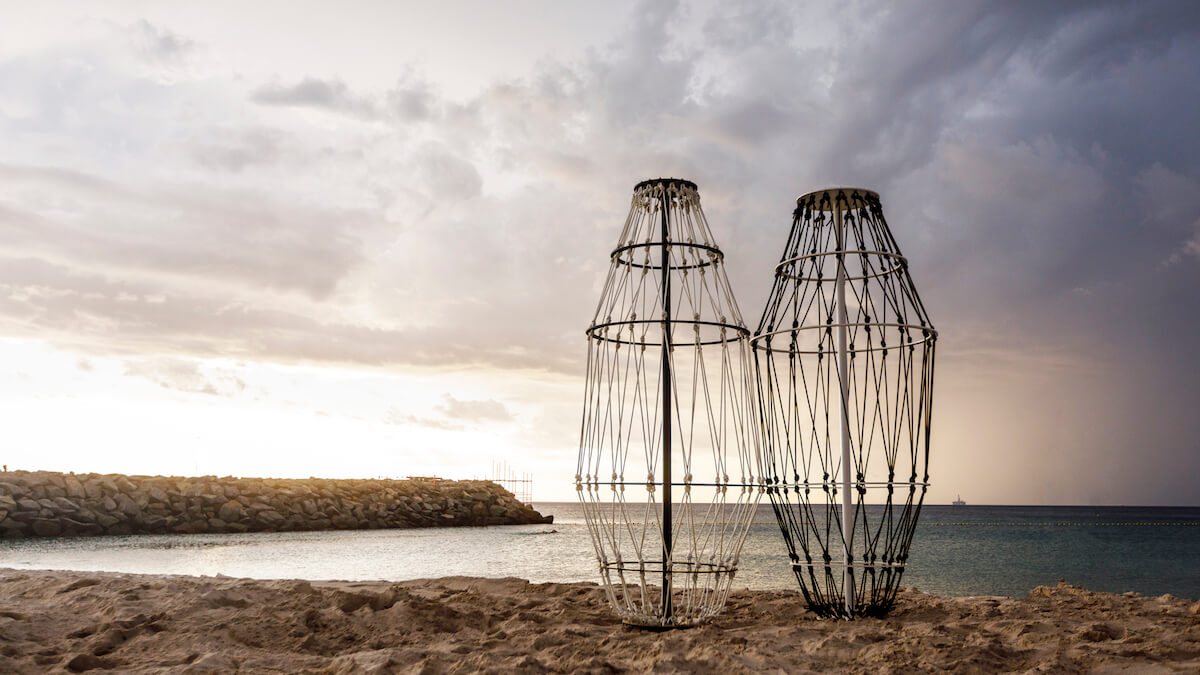 This year the exhibition will also present a new major award, ‘The Sculpture by the Sea, Cottesloe Artist Award’ worth $30,000 and sponsored by the Minderoo Foundation. The award is judged on excellence and is open to all artworks on display. Due to the impact of COVID-19 on international freight, some of the overseas sculptures have arrived late due to no fault of the artists. Judging has therefore been delayed and the award winner will be announced mid next week.

After the people of Perth and WA saved Sculpture by the Sea last year by generously rallying around the exhibition, donating just over $99,000, organisers are again asking the visiting public to donate $5 on entry, or $10 for families, as a voluntary contribution to support the artists and keep the exhibition afloat.

This is even more important this year after the Australia Council did not renew the Federal government’s annual support of $100,000 for the Cottesloe exhibition that had been provided for the last five years.

Donations from the public will be first used to cover the artists’ installation costs, then towards the costs of staging the exhibition to ensure the return of Sculpture by the Sea, Cottesloe next year. Any additional funds will contribute towards the freight costs of artists who do not sell their sculptures.

See all art exhibitions in Perth