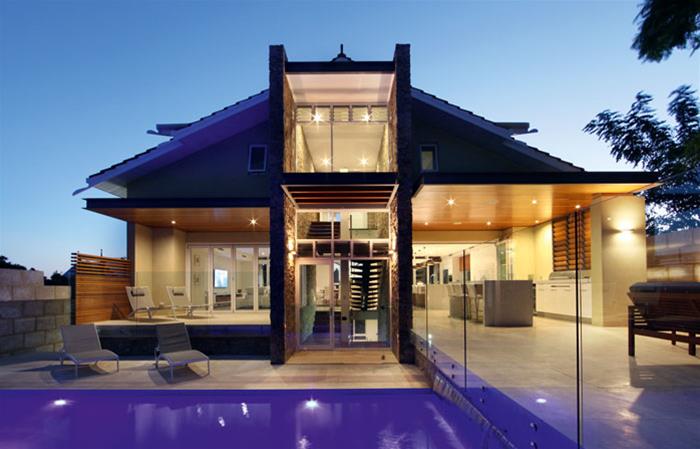 9 Jul, 2014
Web
An unusually difficult site with heritage restrictions this Mt Lawley took each of these problems and turn them to its advantage.

An unusually difficult site with heritage restrictions meant this Mt Lawley renovation faced a whole host of difficulties. The resulting design, however, works hard to take each of these problems and turn them to its advantage.

Architect Peter Lee had always been drawn to this leafy pocket of Mt Lawley, and when “the worst house on the best street” came up for sale, he and wife Shareen Traub were quick to place an offer. The due diligence that followed unearthed some interesting obstacles, which ended up inspiring a design that simultaneously blends with the streetscape and makes a modern statement.

For years, Peter was awed by the old-world architecture of the Mt Lawley area near where he lived.

“There are wonderful houses, a railway station a block-and-a-half away, and the hub of Beaufort Street, with all of its excitement and entertainment, a block-and-a half on the other side,” he says. 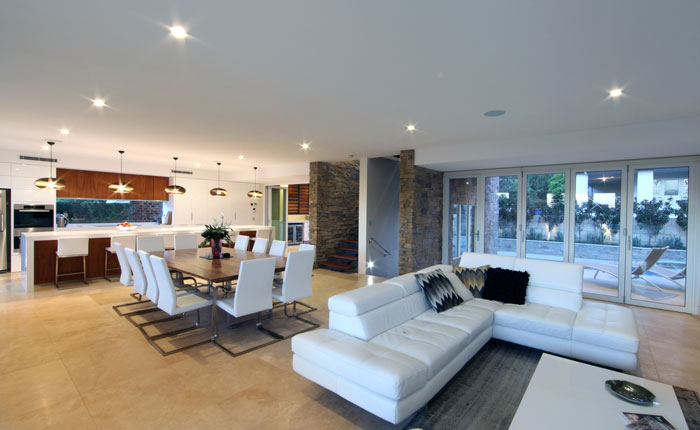 Peter is one of seven international directors of HASSELL, the largest architectural firm in Australasia, and responsible for some of Perth’s biggest commercial and government projects, including Brookfield Place, 140William, Fiona Stanley Hospital and the Waterbank.

While taking multi-million dollar projects in his stride during the day, Peter says designing his own family home was easier in scale – yet it was more difficult to overcome the red tape.

“I was working on the heritage aspects of both 140William and Brookfield Place during the house project, and I was amazed at how we could make changes to the most incredible heritage buildings in the centre of Perth to make them more functional and workable, and then be confronted with a dilapidated home where getting approvals for anything was a challenge.

“While I would have loved to have demolished the original home and built a contemporary one, the heritage concerns have helped make the home into what it is – one that is respectful to the street but very modern inside, a design that spans four levels in an area with two-storey building-height restrictions.”

“I designed the house and solved the big problems, whereas the credit for all the details goes to Mike, from all the built-in cabinetry, to all of the steps being the same height inside and out.”

“It took 29 months, but most of the hold ups were my fault,” Peter laughs, “Greg and I are now great friends – he was great throughout the whole process.”

During their initial building inspections, the couple found the original 1928 facade had to be maintained. It sat 4m above street level and was set far back on the almost 1000sqm block. The site had a slope of 8m from street level to the back, and further examination uncovered a public sewer at the rear of the original home.

“The sewer position was really unusual because they’re always positioned in the street, but because Mount Lawley is such an old suburb, it ran straight through the block,” Peter explains.

The positioning inspired a glass walkway design, which links the old and new structures and invites natural light inside.

“The walkway was designed so if, in say 100 years, anyone needed to get to the sewer, they could dig up the floor without disturbing the main build.”

The fact that the frontage sat so far back and high on the block was another case of “the problems solving the design”.

“To get such a generous house on the block, we built a garage and gymnasium off the street and turned the original garage into a gatehouse entry,” Peter says.

The slope has been overcome by a longline entrance path of steps and platforms lined with ornamental trees and lush plantings. A section of grass sits atop the garage, creating a private front garden off the wrap-around verandah.

The facade was taken back in time, with tuck-pointing, dappled-render columns, cedar roof lining and extended eaves and gables. These 1920s references were replicated on the frontage of the structure behind the original dwelling. 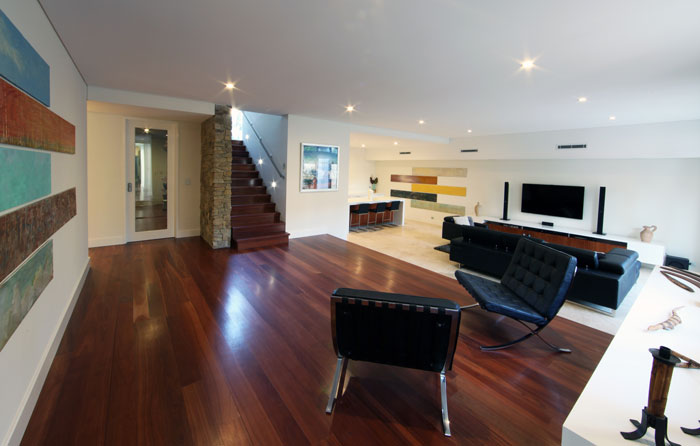 Walls of hand-cut and laid Rugged Earth ‘Pantheon’ stone from Meteorstone provide an anchor to the stairwell, which is encased in glass and extends through three levels.

On the middle level, the contemporary style really comes into play. “The second floor houses a 13m by 8m glass living box, lined with 600mm by 900mm Turkish travertine stone floors and bound by four balconies with bi-fold doors to the exterior.”

In the open-plan lounge, dining and kitchen spaces, walls of windows and doors fold back to capture full CBD views.

A 5m-long kitchen island with thick Caesarstone waterfall benchtops defines the kitchen. A wall of cabinetry houses an array of Miele appliances and integrated storage, punctuated by a window splashback.

Another island bench in the adjoining alfresco area lines up with that in the kitchen, and the cabinetry extends out to the barbecue, for a seamless 12m-long space when the bi-fold doors are open.

The main suite is found in the loft level. It has an open-plan sleeping and lounging design, walk-in robe, ensuite and balcony, which enjoys views from the hills to the city and toward Scarborough.

It was lucky the family could live in their previous home during the build, which lasted almost five years.

“The problems solved the design and we now have a home where my wife and I have two levels of wonderful bliss and then our children can have their own separate lifestyle downstairs.” 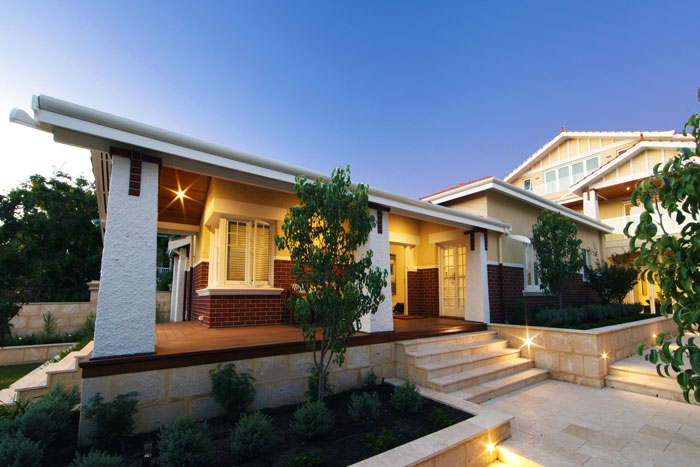