15 Dec, 2015
Web
Gram for gram, nothing delivers taste and satisfaction quite like a WA swimmer crab.

It’s the stuff that creates conversation and family folklore, complete with boasts of who caught the most. Recreational crab fishing is a time-honoured West Australian pastime that anyone, young or old, can enjoy. It’s fun even if you don’t catch anything. But if you do, the act of eating the crabs, served with crusty bread and beer on a newspaper-lined table, is a sure-fire way to impress family and friends.

Getting to the meat takes a little practice. Some like to meticulously ‘pick’ all the sweet flesh and pile it on bread, while others prefer to ‘crack and suck’, with crab juice running down their hands and chin. Either way, shelling and eating crabs is a performance, not just a meal.

Blue swimmer crabs are found all around the WA coastline. Professional fishers are centred in Shark Bay and Nickol Bay in the north, and from Cockburn Sound to Geographe Bay in the south.

However, there can be no doubt that Mandurah is the favourite spot for recreational crabbing in WA. Meegan Watt marks the third-generation of women in her family to commercially fish in Mandurah, carrying on the tradition of her husband’s mother and grandmother (photography Graeme Bennett).

Statistics from the 2013/14 Department of Fisheries Status Report reveal that 92 per cent of the recreational crab catch occurs in the West Coast Bioregion, and about two-thirds of that is in Mandurah’s Peel-Harvey Estuary.

Heather Brayford, the Department of Fisheries director general, says there are many factors that make the Mandurah crab fishery special.

“It’s an hour from Perth, people love catching and eating crabs, and it has a commercial fishing industry that has been supplying seafood since the early settlers,” says Heather. 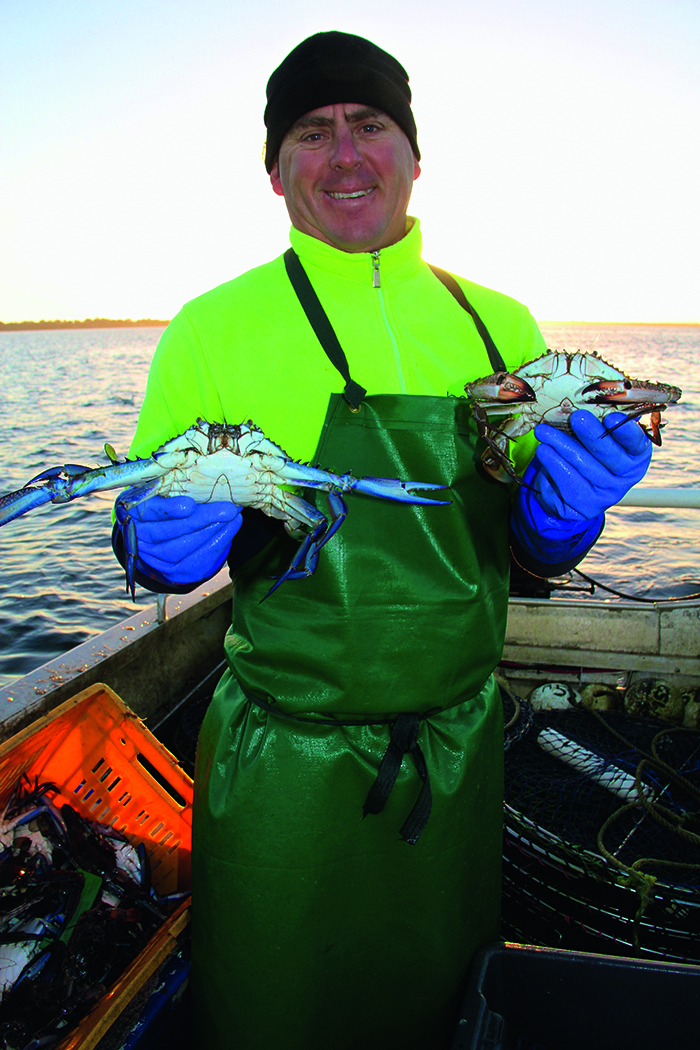 “It’s also a fishery that is greatly influenced by environmental conditions, which means as resource managers we have to be flexible and vigilant, and address changes to ensure the future of the stock. Our number-one priority is to protect the breeding stock so that everyone will always be able to enjoy a Mandurah crab.”

It’s hard to believe that the much-loved crustacean was, to the early settlers, vermin. The Mandurah Community Museum has some wonderful oral histories from residents and commercial fishermen discussing how the blue swimmer crab should be eradicated.

In the early days, the local seafood focus was solely on fish, and the industry supported a number of canneries that were put out of business in the 1920s due to cost pressures and competition from imported canned fish. The fishermen continued to supply fresh fish to the Perth market, however. Our culinary tastes became more adventurous after the Second World War, primarily influenced by European and Asian immigrants, and we slowly began to enjoy a crab or two. Lyn Allsop was 12 when her parents bought the beach store in Mandurah in the 1950s to service holidaymakers at the camping ground. She remembers taking their small wooden boat out to catch heaps of crabs, and cooking them in copper to sell for a little extra cash during the peak Christmas holiday season.

“The crabs and mum’s fruit-salad ice blocks were very popular,” says Lyn. “There was nothing fancy about the crabs – no My Kitchen Rules in those days.”

Crabs were first sold in Mandurah in the Easter of 1967, after Perth fish markets declined a consignment of crabs from local fishing family the Watts. Undeterred, Nin Watt and her daughter-in-law, Suzette, sat under a wattle tree on Old Coast Road with an esky full of crabs and a handwritten sign: crabs, a dollar a dozen.

“It’s hard to believe that the much-loved crustacean was, to the early settlers, vermin.”

But it was not until the 1970s that the joy of eating a ‘bluey’ really came into vogue. Now, the Mandurah crab is so highly prized it has its own two-day festival, which has become a (sea)foodie’s heaven.

The City of Mandurah recently changed the Crab Fest logo from red to blue, to symbolise the crab in its natural environment and to promote sustainable fishing.

Mandurah now also has an eco-cruise that takes tourists crabbing under a special licence issued by the Department of Fisheries. Guests can set and pull a net, or try their luck with a scoop net while paddling in the estuary. They learn about the crab, the rules on size, bag and boat limits, and finish by cooking, cleaning and eating their catch.

“It’s a sensational thrill for someone who has not had the chance to catch a crab,” says Mandurah Cruises’ Kevin Mahney. 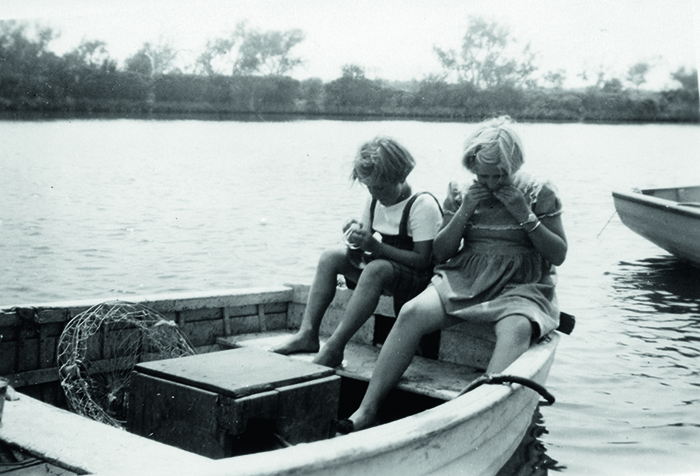 An example  of the photographs at the Mandurah Community Museum that celebrate the region’s early fishing history.

The Peel-Harvey commercial sea mullet fishery is also seeking MSC certification as part of the State Government’s $14.5 million fund to have every WA fishery independently assessed.

The third-party assessment will take more than a year to complete, and there is no guarantee that the fishery will meet the high environmental standard. “We hope fisheries around the world will be inspired to follow the lead of the Peel-Harvey crab fishery,” Matt says.

Dr Andrew Rowland, CEO of Recfishwest, the peak body representing recreational fishers in WA, believes the certification will shine a welcome spotlight on the fishery.

“Crabbing is iconic to Mandurah and, given its importance, it’s vital that it is always subject to best management practices – the MSC will ensure that,” he says. “As a client-driven process, Recfishwest is representing the community, and we will be front and centre in working out how to address issues which will improve stewardship.”

Damien Bell, president of the Mandurah Licensed Fishermen’s Association (MLFA), which has represented professional fishermen in Mandurah for more than 100 years, has led the commercial fishing sector into this history-making collaboration.

“We are here to bring crabs and fish, like mullet and whiting, to people in Mandurah and Perth, who can’t catch them themselves,” he says.

“There are just 10 licences operating in the Peel-Harvey crab fishery – families like the Mathews, the Watts and my family have been fishing for three and four generations. It’s a boutique fishery, fished by small boats. We catch our crabs in the morning and deliver them the same day. It’s pretty unique for a fishery to be just an hour away from its main market.

“We know that we have a quality product that’s as fresh as you can get it, and we know we fish sustainably – but we want the community to be confident in that knowledge. The MSC will help us tell our story.”

The Watt family’s Mandurah fishing story starts in the 1890s with Alfred, and spans four generations. But it wasn’t just the men who went fishing for a living. Three years ago, Meegan Watt marked the third generation of Watt women to fish commercially when she bought her own licence and joined her husband, Brendon, in the business. Meegan follows in the footsteps of Brendon’s grandmother, Nin, and mother, Suzette, who pioneered the sale of crabs from their roadside stall.

“In those days a lot of the fishermen’s wives went fishing,” says Brendon. “As a baby I spent a lot of time on the boat in a basket.”

Meegan goes crabbing six days a week in her own boat, starting at 3.30am and returning at sunrise. In the cold, wet winter months, she starts around 4.30am and returns home when it’s still dark.

She then cooks some of the crabs for the shop and does the twice-weekly delivery to wholesaler Catalano’s Seafood and five local outlets. Most days, she goes fishing for mullet and whiting in the afternoon. 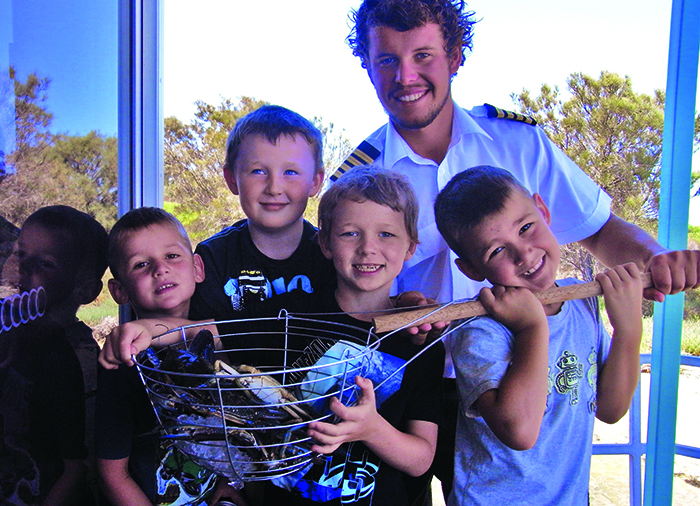 “I am still learning,” she says. “Mostly I do it to ensure that we have a licence for our sons. Matthew (17) is already fishing with me, and while Christopher (14) is still at school, all he wants to do is go fishing. They will hopefully be the fifth generation of Watts to fish in Mandurah.”

For Meegan, the MLFA’s decision to go for MSC certification is good news, offering a future safeguard for local fishing.

Jason Hutchen, chef and owner of the Redmanna Waterfront Restaurant on the Mandurah estuary, caters for tourists (and locals) who can’t catch a crab in the area but want to taste the famous saltwater produce. Last year, he won the Restaurant and Catering Association’s Best Seafood Restaurant – WA for his menu of fresh WA seafood including lobster, Shark Bay prawns, oysters, mussels and, of course, local crab.

“I find that tourists like crab as it is – they like to crack it themselves, and we provide finger bowls and all the equipment to help them. Sometimes we get guests who have never eaten a crab like that, so we give them a lesson and lots of help. They really enjoy the experience,” he says.

“I get my crabs delivered every week by Meegan Watt – she’s a trouper – for me it’s all about local seafood.”

Must Winebar chef Russell Blaikie recently celebrated the blue swimmer in a ‘crab boil’ at the Cottesloe Beach Hotel. A Busselton boy, Russell caught them right off the beach as a kid.

“I love catching them, I love cooking them,” says Russell. “The Beach Club at the Cottesloe Beach Hotel was just begging for a crab boil,” he says.

“We started with Mandurah crabs delivered by Damien Bell. They were super fresh, we cooked them in seawater, and served them straight from the pot – it just doesn’t get any better than that.”

Be sure to buy direct from fishers in Mandurah, open seven days a week:

Boil water and add salt. Add the crabs and boil for six minutes. Take them out and immediately put them into cold water to stop the cooking process.

TOAST peppercorns in a frying pan for five minutes or until they start to become fragrant, tossing to ensure they are evenly toasted. Crush to a semi-fine texture with a grinder, or mortar and pestle.

MIX flours together, then add all other dry ingredients. Combine well. Heat oil in the deep fryer or wok to 180°C. Add about 50ml of water to half the flour mixture and stir until it has a batter consistency.

COAT crabs in the remaining flour and then dunk in the batter. Gently place one crab at a time into the oil and cook for about three minutes each. Remove and season with salt and pepper.