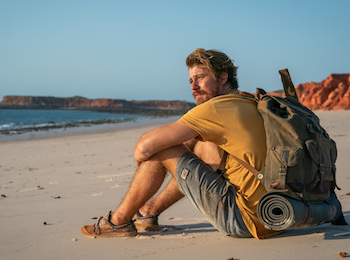 The trailer for the adaption of Tim Winton’s award winning Dirt Music, set in a small, fictional WA fishing village has been released.

Filmed entirely in WA across 2018, from Cape Leveque of the Kimberley to the beautiful Great Southern town of Esperance, you can’t help but feel proud to be West Australian watching it.

Full of establishing shots of our famous red dirt from up north as well as the white sand beaches of the south, it showcases the diversity and beauty of WA. Keeping it in the Aussie family, Dirt Music features original music written and performed by award winning singer-songwriter, Julia Stone. Made famous as one half of folk duo Angus & Julia Stone, Julia is now trying her hand at acting, taking on the role of Sal, the ex-partner of Lu (Garrett Hedlund). Dirt Music showcases a cast of internationally renowned actors, featuring Scottish actor Kelly Macdonald and American actor Garrett Hedlund, who both absolutely nail the Australian accent, a task many have failed in the past (cough, Meryl Streep). Plus, an all-star line-up of producers, such as Academy Award® nominees and BAFTA Award winners Finola Dwyer and Amanda Posey (Brooklyn, An Education) of Wildgaze Films and Academy Award® nominee Angie Fielder (Lion, Wish You Were Here). If you haven’t read the iconic novel, here’s what you’re in for:

Georgie (MacDonald), sometime sailor, diver and nurse use to have guts. But somehow she has lost her way. Stranded in a remote fishing town on the West Australian coast she’s living with a man she doesn’t love, Jim (Wenham) and his young sons whose dead mother she can never replace. But a reckless moment leads to a life-changing encounter with Lu (Hedlund), an enigmatic loner, one time musician and sometimes poacher, outcast from the community. The two are powerfully drawn to each other and embark on an inescapable, intense and sexually charged affair. Georgie will risk everything for this chance of love, but Lu is haunted by a tragic accident from his past. For him the prospect is too painful and he retreats into the wilderness to the remotest islands leaving little clue as to his whereabouts. With the unlikely help of Jim who is determined to right the wrongs of his own past, Georgie embarks on a journey to bring Lu back from his past and his grief, ultimately finding herself. WA’s newest seafood delicacy, the delicious WA Sand Crab, to be served in Perth for the first time ever

In a Perth first, the rare WA sand crab (or ‘Toe Nipper’) is being showcased on the menu of a four-course foodie event at Clancy’s Fish Bar City Beach on September 2. From the icy waters of the Great Southern region, the WA sand crab is sustainably fished and will be brought directly to the […]

Ben Broady’s passion for the unique landscapes of the East Kimberley developed at a young age. Growing up in Wyndham, Ben has lived in Kununurra for the past 30 years, working as harvest manager for the world’s largest Indian sandalwood plantation before taking up the camera professionally. “Photography was never on my radar,” he says, […]