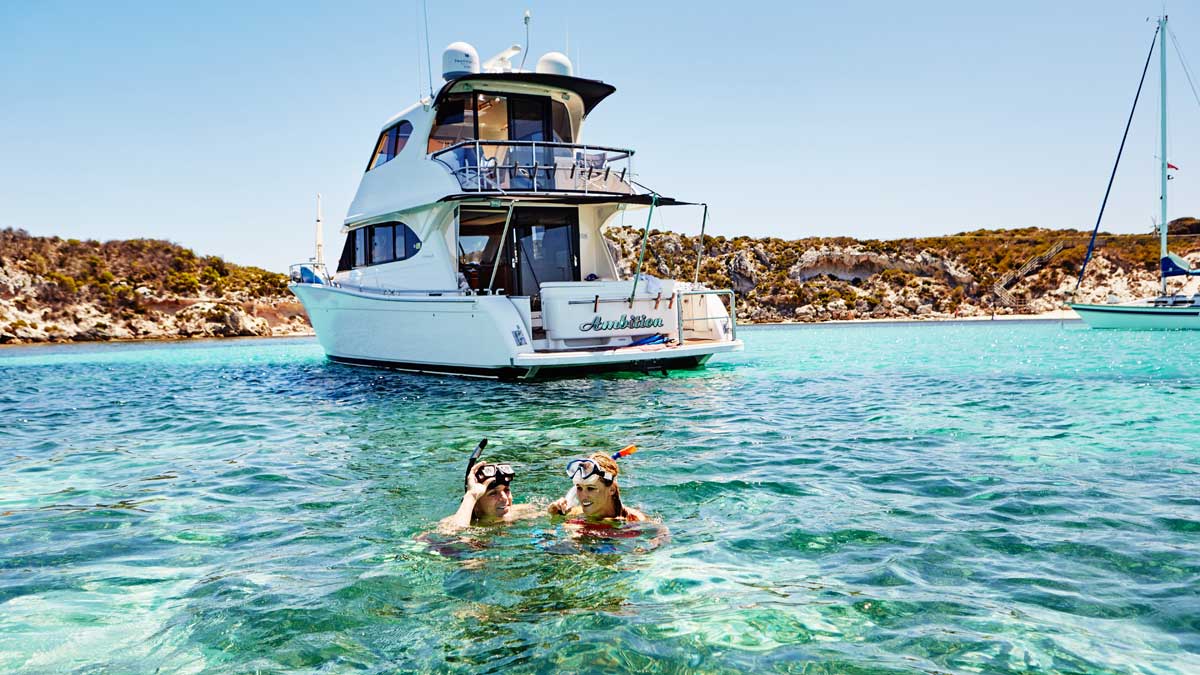 Things to do in Rottnest

1. Take the Wadjemup Lighthouse tour and enjoy 360-degree views that extend to the mainland.
2. Ride the island’s Captain Hussey train to the historic Oliver Hill Battery and Gun Tunnel. 1.30pm daily.
3. See the sights by light plane, boat, foot, motorised segway or air-conditioned coach. If you’re feeling adventurous, explore underwater with a snorkel.
4. Tee off at the refurbished Rottnest Island golf course.
5. Paddleboard in one of the many tranquil bays.
6. Snorkel at The Basin, only 10 minutes from the settlement, which has shallow, clear water ideal for underwater viewing.
7. Spot bottlenose dolphins, known for feeding and surfing the waters of Salmon Bay.
8. Catch the antics of a colony of New Zealand fur seals from a spot on the new Cathedral Rocks viewing platform.
9. Watch ospreys tend to their burgeoning nests at West End. Some of the stacks are more than 70 years old.
10. Have a rejuvenating experience at Karma Spa at Rottnest Lodge.

Rottnest is compact enough to be enjoyed by pedal power alone, and the lack of road traffic (most vehicles are banned) makes for a pleasant journey every time. If you don’t want to bring your own bicycle, hire one at Rottnest Island Pedal & Flipper in Thomson Bay. You’ll find hundreds of bikes for every age and ability, with kiddie seats and tow carts, tandems – the lot. You can even opt for an electric bike if you’re feeling lazy. TIP A ‘bike and bus’ pass allows you to leave your bike at a numbered bus stop while you jump on the Island Explorer bus back to the settlement.

After your ride, head to the Rottnest Island Bakery for a pie or a jam-and-cream doughnut. Across the road is Simmo’s and the Laneway Cafe, a great spot for coffee and breakfast.

You’re unlikely to leave Rottnest without catching a fish, and it’s not hard to find a place on the shore, sheltered from the wind. Many fishing spots are just a short bike ride from the settlement. Head further out to Radar Reef or Ricey Beachy, or just a few kilometres off the West End where the continental shelf drops to great depths, and you’ll find bigger fish among the reefs.

Get your snorkel on

More than 135 species of tropical fish call the waters of Rottnest home. The Basin and Salmon Bay are great for beginners, and Parakeet Bay has little coves. An underwater trail can be followed at Parker Point, and there are also some markers at Kingstown Reef. Keep your eyes peeled – green turtles often stop by, as do stingrays.

Whale of a time

In April, tens of thousands of humpback and southern right whales pass by the sheltered waters of Rottnest Island, heading north. From September, on their return trip, they bring their calves down to rest and play in the waters off the island.

• Make a splash over summer at Just 4 Fun Aqua Park in Thomson Bay, with slides, seesaws, beach bungee trampolines, rock-climbing and an obstacle course, plus a kids’ knee-deep park for the little ones.

• Enjoy a leisurely 18 holes of mini golf at the Family Fun Park & Mini Golf in Thomson Bay, or hit up the classic pinball machines and arcade games (blasts from the past include Pac-Man, Space Invaders and air hockey).

• Enjoy a home-made choc bomb or popcorn while watching a blockbuster at the Rottnest Island Picture Hall.

As one of WA’s top photographers, Frances Andrijich is constantly in pursuit of the elusive ‘perfect image’. From shooting on the pristine beaches of Margaret River, to enduring 40-degree heat up in the Kimberley shooting the Bardi Jawi Rangers, Frances’ portfolio offers a collective portrait of WA, capturing the ever-changing relationships between people, communities and […]