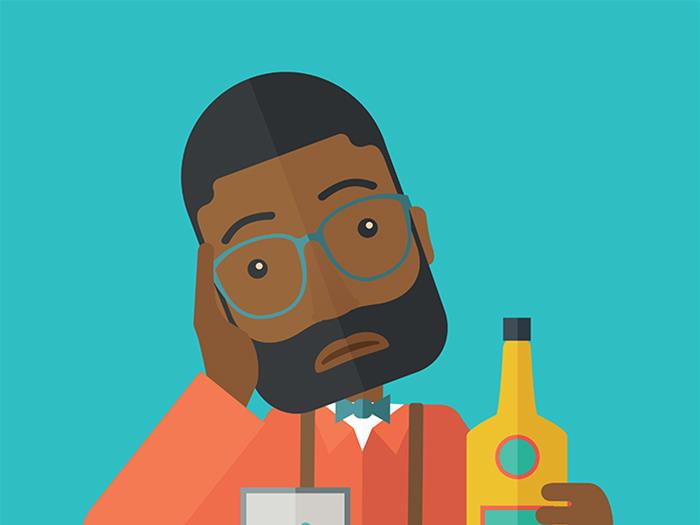 The Other L Word

11 Apr, 2016
Web
Everyone’s felt it: that emotion that grabs you and won’t let go, taking over your life. And no, says Sami Shah, we’re not talking about love…

The ‘L’ word… we have to be careful when and where we use it. To the right person, at the right time, in the right place – under those circumstances it can create magic.
But in the wrong circumstances… well, we’ve all been there at least once in our lives. You think they’re the one. You think the moment is now. You look into their eyes. Maybe hold their hands in yours. And you say it. And then the moon comes out from behind a cloud, and you realise you’re both standing in a parking lot, next to a neon-lit gas station, there’s a drunk pissing in the corner, and the person you just bared your soul to is flinching like a Vietnam War veteran having flashbacks.

There is, however, another ‘L’ word, one even more powerful in its ability to ruin lives and create the kind of utter awkwardness that can only be escaped by setting yourself on fire, just to force a change in conversational topics. I know, because I used it recently. I was talking with a close friend, and she asked me, “So, how’ve you been?” In a moment of honesty, I replied, “I’m lonely.”

‘Lonely’ is worse than ‘Love’. I know, because the look on my friend’s face was so uncomfortable that I had to say “I love you”, just to get her into a more comfortable mental place. People have socially constructed techniques of dealing with “I love you” – even at its worst, we know how to survive that situation. But if someone confesses loneliness? Oof.

Which is strange, because I’m realising more and more how many people really are lonely. All my friends are attractive, intelligent, and interesting people. And they’re all single. They’re all lonely. You can tell in the Facebook posts they put up at 3am on a weekend, describing the meal they just cooked for themselves and their cats.
Or how they binge-watched all four seasons of House of Cards over the last 48 hours. In the old days, saying things like that aloud in the wee hours of the night would be considered a cry for help. Now we just click ‘Like’ and whistle awkwardly to ourselves.

Even the tools we’ve developed to combat loneliness are a farce. OKCupid. Match.com.Tinder. Grindr. App after app, website after website, all to bring people together. But using them, it feels like people are broadcasting their loneliness out into the universe, like radio signals waiting to be heard by a distant alien civilisation that is at the same point in its development. Except sometimes I worry that all that loneliness will coalesce and then become a black hole, which will suck us all into its empty, yearning vortex.

Even when you do connect with someone on the app or website, half the time they turn out to be a bot. You know, a software simulation of a human, which you were two dialogue exchanges into asking out for a drink, before discovering you’ve been talking to the Terminator. Skynet really did come online, and instead of building liquid metal robots to exterminate us with guns, it decided to make create Tinder profiles to make us feel sad.

The thing that frustrates me the most about this whole situation, though, is that it’s self-imposed. The only reason everyone is lonely and single is because we choose to be so. Half the people reading this right now are single, and they’re probably seated next to a stranger who is also single. And they can end their suffering by turning to that stranger and saying, “I’m with you now”. But they won’t, because they believe – we all believe – they deserve the perfect person. The right one. The one who will complete them. I know stone-cold atheists who don’t believe in the existence of toast unless they can bite into it, who think they deserve the right person. They believe in The One, as if the universe owes them perfection, because they handed out flyers that one time for refugee rights, and now there’s some karmic balance waiting to be tilted in their favour.

And what happens when we meet the person we believe is the perfect one? The person we think is the Lego brick designed exactly to have the outy parts that fit our inny parts? (This is all very technical Lego terminology and it’s best you not think about it too much.) We meet that person, we say, “You’re perfect, I love you”… and then spend years discovering they’re really not perfect at all.

This is why I’ve started thinking arranged marriage is a good thing. I’m from Pakistan, my parents had arranged marriages. Heck, half the population of the known world has arranged marriages still. And they’re happy together. My parents aren’t perfect for each other, not in the least, but they stay together and make it work. The reason, I think, is because the expectations are different when you’re in an arranged marriage. You’re being told to spend your life with someone who is, in most cases, a total stranger. Your only hope at that point is that they not be a serial killer.

If you meet them and they don’t turn you into a lampshade, then that’s a good start, and you build from there. And together you fight off the loneliness, and fill it with love.