11 Sep, 2015
Web
Exhibitions featured at The Art Gallery of Western Australia this spring.

Artist | Brett Whiteley is one of Australia’s most loved artists. His work was included in the seminal exhibition Recent Australian Painting at the Whitechapel Gallery, London, 1961, at the age of 22. Whiteley’s output bears the influence of artists as divergent as Francis Bacon and Vincent Van Gogh at one end, and Henri Matisse on the other. This combination, unified by a mercurial draftsmanship that is full of grand sweeping lines and tightly focused explosions and implosions, presents works that are brilliant celebrations of a sensual immersion in life, while being charged with emotional fervour.

Artwork | The American Dream is a dynamic 18-part visual summation of his experiences in America, charting his initial passion for the place, his intense responses to the politics and culture, and his powerful desire to leave it all behind. It is therefore a meditation on the crumbling of Whiteley’s own romantic dream of what America might offer him, and a reflection on a society torn apart by its involvement in the Vietnam War and the assassinations of John Fitzgerald Kennedy and Martin Luther King.

American dream, American nightmare Until February 21| American dream, American nightmare is a two-part display that focuses on one of the collection’s most iconic and most requested works, Brett Whiteley’s The American dream (1968-69). The first version of the display complements Whiteley’s work with British artist David Hockney’s Hogarth-inspired set of 16 prints, A Rake’s Progress (1961-63). The second version of the display will present darker, more political works by American artists, such as Leon Golub. 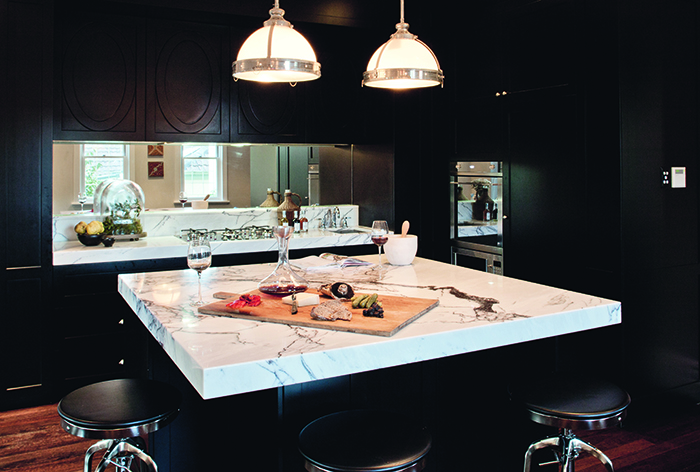 Artist | Megan Cope is a contemporary Aboriginal artist with a strong national and international profile. She has a diverse practice that investigates issues relating to identity, the environment, and mapping practices. She is a descendant from the Quandamooka region in southeast Queensland, and through her paintings and videos, she explores decolonising methodologies, toponymy (the study of place names) and geomorphology (the study of the nature and history of landforms) of heavily populated tourist destinations along the east coast of Australia.

Artwork | This 8.04 minute multi-layered video work speaks to a contemporary
reality for Indigenous Australians. In it, Cope offers a theatrical and humorous
insight into the complexities of Indigenous identity, notions of citizenship, and
Australian stereotypes, through her imagined ‘blaktism’.

The Western Australian Indigenous Art Awards Until October 12 |  One of the richest Indigenous arts prizes in the country, these awards were founded in 2008, and celebrate the scope, diversity and excellence of art from all corners of Indigenous Australia. The Awards acknowledge the significant and ongoing contribution Aboriginal and Torres Strait Islander artists make to Australian art, culture and society. Artist | Mesiti is a performance, video and installation artist who graduated with a Master of Fine Art, College of Fine Arts from the University of New South Wales. She held her first solo show in 2003, and has since exhibited internationally. Mesiti was represented in the 19th Biennale of Sydney (2014) and the 13th Istanbul Biennial (2013). She won the prestigious Anne Landa Award for Video and New Media Arts (2013), and the 58th Blake Prize for Religious and Spiritual Art (2009).

Artwork | Citizens band is a 21-minute, four-channel video installation that documents the individual performances of four migrant musicians, concluding
with a polyphonic piece created by playing all the soundtracks together. Each player produces a distinct sound through techniques that are inflected with their cultural origin. All poignantly evoke their remembrance of the homeland and their displacement from the urban Western context in which they perform.

Screen Space – Angelica Mesiti Until November 8 | A new work is screened every two months in this dedicated space for AGWA’s growing filmic acquisitions. From Through My Eyes.

Artist | Michael Cook has had a short but brilliant career as a visual artist. A former fashion photographer of approximately twenty-five years, Cook began his visual art practice with the creation of Through My Eyes in 2010. Since then, Cook’s work has been included in the Western Australian Indigenous Art Awards, Sydney Biennale, the second National Indigenous Art Triennial and more recently, this year, at the 56th Venice Biennale. His work interrogates official Australian and international narratives and their subsequent impact on Aboriginal and Torres Strait Islander life and history.

Artwork | In this work, Michael Cook has combined portraits of all of Australia’s Prime Ministers (until the point of its creation in 2010) with those of Indigenous Australians. It encourages you to consider the fact that there has never yet been an Indigenous Prime Minister of this country, how Indigenous voices are often missing from civic life, and what Australia would be like if this were not the case.

Resistance November 7-February 21 | Resistance is a presentation of Aboriginal and Torres Strait Islander voices and worldviews about contemporary Indigenous life. It features Indigenous knowledge systems and commentary on Indigenous experiences, histories, cultures and people. It highlights the importance of ‘voice’ to combat voicelessness and invisibility — conditions that are regularly experienced by Indigenous peoples and minorities around the world. Jar, with phoenix and chrysanthemum.

Artwork | Porcelain production in China was revived in the late 17th century by
the Kangxi emperor, who restored the imperial kilns at Jingdezhen as well as incorporating Western technology. The resulting wares, such as this example, were very popular in Europe. Collectors valued the contrast of the white and deep blues of the wares, as well as the use of oriental motifs like the phoenix.

Artwork | This depiction of a Dutch ship was painted at a period of Japanese nostalgia for representations of the past, precipitated by the country’s rapid modernisation following the Meiji Restoration of 1868. From 1641 to 1847, Dutch trading ships arrived 606 times at the foreign enclave of Dejima in Nagasaki. Unlike their Portuguese predecessors, the Dutch vessels were repeatedly depicted in etchings, engravings and woodblock prints over the period.

Treasure Ships: Art in the Age of Spices October 10-January 31 | The exhibition features the spectacular and exotic art produced for global markets from the 16th to early 19th centuries. Demand for spices spurred on the great voyages of exploration and the establishment of vast empires across Asia. Treasure Ships presents the stories of the spice markets, slave trade and shipwrecks, as well as illustrating the astonishing beauty of Chinese porcelain – known as ‘white gold’ – and celebrating vibrant Indian textiles. Tickets can be purchased at treasureships.com.au. Artist | Helen Smith’s practice spans painting, photography and site-specific installation that incorporates a minimalist approach to geometric forms, while reflecting her interest in social and cultural systems. Her working method is the same across the various media she employs, and derives from her view of each work as a container for the idea.

Artwork | The late Italian artist Alighiero e Boetti is well known for Mappa, a series of embroidered maps of the world, created between 1971 and his death in 1994. It is Boetti’s interest in ‘order and disorder’, relative to the harmony of human society, along with Helen Smith’s visit to the Alighiero Boetti: Game Plan exhibition at the Tate Modern in 2012 that inspired the concept for this series of paintings.

WA Focus – Helen Smith Until October 18 | Paintings and photographs selected from the collection are shown together for the first time in this free exhibition to demonstrate the subtle inter-relationship of Helen’s two streams of practice. Artist | Graham Miller is one of Western Australia’s most important photographers, known for his richly atmospheric images that combine cinematic vision with the eye for subtle detail of a short-story writer.

Artwork | Josephine looks at the viewer directly, but with audio playing, she’s hooked into her own world. Her look is all her own. There’s no styling, no real direction. Her muscle shirt reveals her tattoos. She’s in Victoria Park in front of a small cluster of shops. It’s a study in deep, steady suburban cool. There’s toughness, there’s softness. For Graham, the photo was a beautiful accident. He says it was an overcast day and suddenly the light came out, the world transformed. The photo is from the series Waiting for the Miracle 2010.

WA Focus – Graham Miller November 19-February 28 | Presented in two distinct sections, the free show will demonstrate the ways that Graham’s portrait subjects exist as both characters from an un-made film and as, simply, themselves. The landscapes, when considered as a group, will take on a metaphorical dimension, functioning as ‘characters’ also. Working together, these elements will open up the precise slither between fact and fiction, the found and the constructed, that Miller activates so successfully.