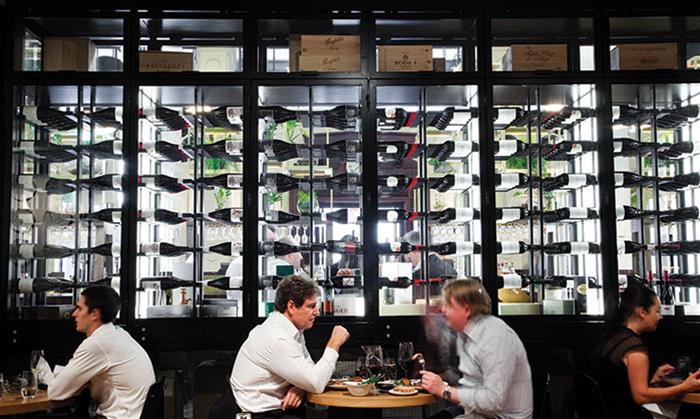 6 Oct, 2014
Web
We talk to some of Perth’s best sommeliers and uncover the secrets to their wine lists’ popularity and success.

There has never been a better time to drink wine in Perth. With our city’s restaurant and bar scene positively booming, our wine choice is bigger, and more diverse and exciting than ever. But building and maintaining a stellar wine list is no easy task. The same qualities that make a standout list – a healthy portion of rare, old, and on-trend wines – also make them a challenge to procure and maintain.

One of Perth’s most impressive wine lists belongs to Print Hall in the CBD. Spearheaded by sommelier extraordinaire Daniel Wegener, this 246-page tome, chock-full of some of the world’s most singular and iconic producers, along with its funkiest young guns, nabbed the award for Australia’s Best Wine List at the Oscars of wine (the Gourmet Traveller Wine List of the Year Awards) in 2013. But maintaining a list of this magnitude takes an enormous amount of skill, wine knowledge, organisation, and relationship-building.

“The biggest challenge for most sommeliers is time,” says Daniel. “Great wine lists are about the creative space to express the wine culture of the venue. Buying wine is 85 per cent relationships. If you want good Bordeaux you need to understand it, so that the people who have it to sell call you first.”

Print Hall is also one of the few restaurants in Perth to have a complex and vast cellaring program, and it’s Daniel’s job to ensure that it is maintained. “We keep track of wines with regular tastings and note taking. It’s patient work, this.” Lalla Rookh’s wine list features a selection of the “weird and wonderful”.

Friends is another restaurant all too familiar with the challenges of maintaining an immense cellar. “You have to be very careful,” says owner and head sommelier Clyde Bevan. “We keep really old stuff at 10 degrees to stop it from progressing, and wines younger than 15 years old at 16 degrees.”

One of the few traditional eateries left in Perth, not a lot has changed at Friends in the 17 years since Clyde and his wife Lesley opened it. But the dated decor and old-school wine and food menus actually add to its charm. Nowhere else in Perth can you find a wine list crammed so full of icons and at such bargain prices.

evan has been collecting back- vintages of the world’s most famous wines for 30 years, and cellaring them below his house. He snapped them up at a time when many of these wines were still relatively affordable, and rather than get greedy as Perth prices soar, he offers them at a hell of a deal. What’s more, he only opens them when they’re ready to be drunk – a rare thing these days.

“I bought my Bordeaux before the Chinese discovered them. Now, it’s gotten savagely expensive,” he laments. The wines for Friends’ list  have been collected over more than 30 years.

Some restaurants are lucky enough to import wines directly from producers, cutting out the middlemen and thereby offering unique bottles at a lower mark-up. Paul McArdle, wine buyer and consultant at Must Winebar, spends much of his time globetrotting, bringing back small quantities of wine exclusively for Must’s ever-changing list.

Ian Baverstock, who heads another colossal list at the Perth branch of Rockpool Bar & Grill, is fortunate to have access to the private cellar of one of the co-owners of Rockpool, the third-largest cellar in the world.

“We’re able to offer bottles that aren’t available anywhere else, and at good
value,” reveals Ian.

Rockpool’s list – a healthy balance of the rare, the classic, the funky and everything in between – has been in the spotlight lately for snagging the top prize (awarded jointly) of Australia’s Best Wine List of the Year in the Gourmet Traveller Wine awards, succeeding Print Hall. But, because of space and budget restrictions, not every venue has access to private cellars or direct imports. The majority must rely primarily on wholesalers for their selection. In this case, things can get tricky because many wines on Perth’s top lists are produced in small quantities.

“We specialise in small growers who produce very little,” says Jeremy Prus, owner and head sommelier at Lalla Rookh Wine Store, Perth’s haven for weird and wonderful, mostly ‘natural’ wines. “Demand well and truly exceeds supply, so for me it’s managing these very sought-after grower wines so our customers have access to them. It’s challenging.”

Emma Farrelly, whose enviable job as wine consultant to venues including The Trustee, Beaufort Street Merchant, Varnish on King, Divido, and Red Cabbage, faces similar hurdles in securing rare wines, but also in getting wines sent from the east coast.

“It’s like they woke up and said, ‘Ooh, Perth is a place, we can give them some wine!’” she exclaims, bemoaning the logistics and time required to ship wines to our western shores.

With demand for a wider variety of wines soaring, keeping them in stock in our isolated city keeps sommeliers on their toes, but all agree it’s an exciting time to be pouring wine in Perth.

“Five years ago, people hadn’t even thought about Châteauneuf-du-Pape or Chianti,” remarks Emma. “Spanish wine was considered exotic, but now it’s commonplace. People ask me now, ‘Is this a modern or a classic style Chianti?’ which kind of freaks me out!”

These days the trend is towards lighter, more savoury, food-friendly wines with less alcohol and upfront fruit. Cool-climate grapes like pinot noir are hot on every wine list, as are wines from Northern Italy, Spain, and Argentina. But wines from our own backyard are equally on-trend, particularly from some of the more offbeat producers.

“There are a lot of younger Australians having a crack at making very interesting things, which is really exciting,” says Emma. Paul McArdle travels the world to supplement the wine list at Must.

“The best wine lists in Perth are now as good as anything in the world,” says Paul McArdle. “If you go to London, you’ll see things on lists that we don’t have, but if you look at the spread of wines, it’s the same.”

But it’s worth remembering that great wine lists, whether in an ultra-traditional eatery or a hipster hangout, have something in common: a sommelier who has invested a remarkable amount of time, skill, and knowledge into ensuring the world’s most thrilling and delicious wines continue to flow. So the next time you’re out, clink your glass in thanks to them.