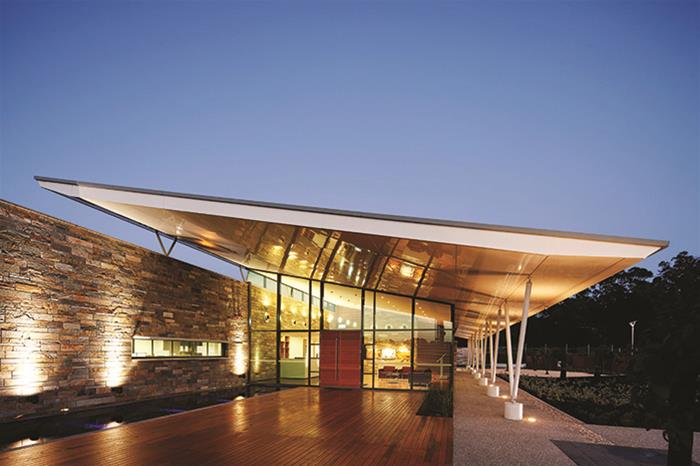 15 Jun, 2015
Web
With a focus on durability and an aesthetic connection to the surrounding landscape, Parry & Rosenthal Architects creates a unique structure with an important purpose.

Parry & Rosenthal Architects was appointed for the Southern Seawater Desalination Plant project in 2008. With the second stage due for completion in early 2013, the construction of this new plant means more than half the water required for the Perth metropolitan area will come from climate independent desalination.

Located in an abandoned quarry, the plant is surrounded by a landscaped berm created to both visually screen and acoustically shield the plant. Most of the site has been re-established, rehabilitated and revegetated. A clustered layout was chosen to minimise footprint, while materials were selected for cost, durability and their visual relationship with the natural environment. Maximising natural ventilation and lighting were key factors in the design, while the use of large, simple, cubic forms scale down the plant buildings.

Visitors and staff pass through a sheltered entryway into the Administration & Control Building, located at the plant’s gateway. As the central operation hub and testing facility, the building controls access to the plant, and houses reception, training facilities, offices, staff amenities, control room, laboratory and water testing facilities. Extensive glazing, a light structure and floating roofs achieve a sense of transparency and openness, as well as maximising natural light and views.

Impressively, the energy required to power the building and plant is offset by the Mumbida Wind and Greenough River Solar Farms.

Stage One of the project officially opened in September 2011, three months ahead of schedule and under budget.

The design has won a slew of awards, including a 2012 Australian Institute of Architects’ Architectural Award, a 2012 Master Builders Excellence Award, the international 2012 Global Water Award’s Desalination Plant of the Year, and was the 2011 Engineering Excellence Awards’ Overall Winner.