David Zampatti is overjoyed the Kohesia Ensemble is back with its award-winning and intoxicating Fringe show, Shahnameh. The only people unsurprised when the Kohesia Ensemble’s Shahnameh: Songs of the Persian Book of Kings took out the prestigious Martin Sims Award for best new West Australian work at last year’s Fringe Awards were those who had seen this eclectic, eccentric and genuinely entertaining ramble through one of the great epic poems of mankind.

It’s a joy that it has returned for this year’s Fringe World and should not be missed.

Written at the beginning of the 11th century by the poet, Abolqasem Ferdowsi, Shahnameh’s 50,000 couplets of Early New Persian preserve the stories of the Sassanid empire and Persian culture from the dawn of time to their overthrow by the all-conquering Muslims in the mid-7th century. A mix of myth and legend, historical fact and Ferdowsi’s own imagination, it rivals in scope and literary beauty the great stories of Greece, India and northern Europe. Narrator Saeed Danesh tells stories from Persian myth and history, accompanied by the Kohesia Ensemble, in ‘Shahnameh: Songs from the Persian Book of Kings’.

The songs performed here are from the poem’s Heroic Age, from the benign 700-year rule of the great King Jamshid to the love story of Zal and Rubabeh and the seven trials of their son, the Herculean Rostam, and his mighty horse, Rakhsh. Kate Pass wrote the music for ‘Shahnameh’, which she also produced.

The stories of kings good and evil, heroes and demons, great enmities and romances are narrated by the charismatic and sonorous Saeed Danesh. Accompanied by an eight-piece band led by double bass player Kate Pass, who also composed most of the music, Danesh brings to life the scented courts, ferocious battles and fabled personalities.

And what a band it is. The front line of ancient instruments – the ney (Persian flute) played by Esfandiar Shahmir, the saz (Persian lute) played by Reza Mirzaei, and the oud (Middle Eastern lute) played by Mike Zolker – is backed by jazz players Mark Osborne (saxophone), Jessica Carlton (trumpet), the legendary Daniel Susngar (drums), Chris Foster (keyboards) and Pass. It’s a heady mix, highlighted by Susngar’s dynamic percussion, Pass’s enthusiastic bass and the evocative sounds of the traditional instruments.

All in all, it’s an intoxicating and genuinely revelatory performance that well deserves the reputation it has earned from word of mouth and its awards. 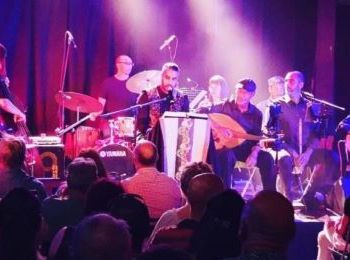 Shahnameh runs until Friday 22 January in the De Parel Spiegeltent in the Woodside Pleasure Gardens.

The eight-piece Kohesia Ensemble also plays on 23 and 24 January at The Ellington Jazz Club; and the Kohesia Quartet plays at Ellington’s from 2 to 4 February.

Looking for somewhere a little more extra than ordinary to enjoy an evening out? From a secretive speakeasy to unique themes that will you transport you to a different time, the following bars come dressed from head to toe in unique interiors that contribute to their quirky personalities with beverages and bites to match. 1. […]