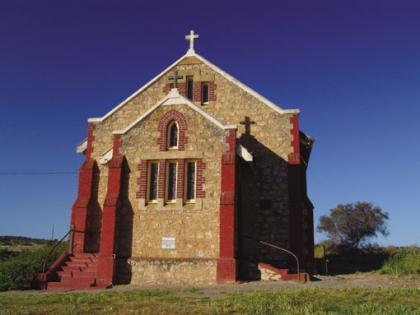 Take a journey through Greenough and you’ll find yourself transported back in time.

In Greenough, among the gloriously restored historical buildings and the patchwork of crops and rolling hills, you’ll find a sense of timelessness and a feeling of romance reminiscent of the past. It’s little wonder, considering the Central Greenough Historical Settlement (formerly known as the Greenough Hamlet), is considered among the country’s best-preserved 19th century towns.
In the heart of this historic village lies a collection of 11 buildings, including the former jail, courthouse, police station, churches and a school. And while these buildings today operate just for tourists, you need only spend a little time here to feel transported to another time.

Close your eyes while standing in the cool confines of the jail and you can almost hear the clank of chains and the shuffle of prisoners. Or step inside the courthouse and imagine the trials once heard here and the sentences handed down.

The village was formed in 1865 to service the surrounding pioneer farmers, who struck out north from the expanding Swan River Settlement in a bid to eke out a living from the land.

Today the village is complemented by an ever-growing series of interpretative material, which opens your eyes to the area’s most colourful stories. There’s also a stylish cafe set alongside the village – just the spot to sip a coffee while overlooking the buildings.
The Central Greenough Historical Settlement is the centrepiece of an entire suite of historical buildings and areas of interest on the Greenough/Walkaway Heritage Trail.

The trail takes in some 36 historical buildings and starts from the Pioneer Museum. Located in the former home of Greenough pioneers John Maley and Elizabeth Waldeck, the museum is the oldest in the Mid West. The couple moved here in 1862 and raised 14 children in the region. Today the museum is run by passionate Greenough historian Gary Martin and provides a fascinating insight into the everyday life of Greenough’s pioneers.

The heritage trail also includes the Pioneer Cemetery – a moving tribute to the men, women and children who first settled in the area. The inscriptions on the tombstones are moving and enable visitors to imagine the lives lead by these hardy pioneers.
While on the heritage trail you’ll also cross the Old Convict Bridge, which passes over the Greenough River, and visit the historic Hampton Arms Inn, which has a restaurant, motel, bar and a rare secondhand bookshop. The inn was the first to operate in the district, opening in 1863, and has been beautifully maintained and restored. The Hampton Arms Inn is also rumoured to be haunted by a local stonemason who was killed in a fight in the bar many years ago.

The heritage trail continues by the Walkaway Railway Station Museum, giving travellers an insight into the region’s transport history, and on to the modern day Alinta Wind Farm – the second largest in Australia.

You’ll finish your journey at the scenic Ellendale Pool – a permanent water hole framed by rust-red rock walls and renowned as being an important site for the Aboriginal people who lived here, long before Europeans first arrived.

The Central Greenough Historical Settlement is located about 20km south of Geraldton. Several gorgeous bed and breakfasts operate in the area and further accommodation is available in Geraldton. The Greenough Museum & Gardens is much more than a traditional house museum. Come visit us and you will be pleasantly surprised.

Discover the social history of Greenough in the spacious rooms of what was once Greenough's largest house. Built between 1862-80 for John Stephen Maley, his wife Elizabeth (nee Waldeck) and their 14 children, this home has now been serving as a local history museum for over 50 years. Over the last few years the museum has been transformed, making it more interactive and family friendly. Whilst here also take time to wander through Elizabeth's Garden, the Community Veggie Garden and marvel at what could be Australia's oldest leaning gum tree. The Irwin District Museum is housed in the former Dongara Police Station, Courthouse and Gaol. The building also served as a ticket of leave hiring depot, and police quarters. It's open Mon- Sat, 10am

The building was built at a contract price of £1200 by expiree Joseph Walton in 1870-71 using ticket-of-leave labour.

By 1874 the building had a lean-to addition added to the north side which served as a post and telegraph office. The native cell to the west and some of the rear yard walls were demolished in the mid 1950's.

The building served as a police station, courthouse and quarters until 1983. In early 1984 the building was occupied by the Tourist Centre and between 1984 and 1987 extensive restorations were funded and carried out by the Dongara Old Police Station Restoration Committee with additional funding through a grant form the WA Heritage Committee.

In 2000, the Society built additional museum display space on the site of the former horse stables at the rear of the building jointly funded by LotteryWest Small Museums Grant and the Society.

Currently the building is operated by the Irwin District Historical Society as a research office with historic displays, the Dongara Magistrates Court is held each month in the former Day Room. Overlooking the Indian Ocean, the Western Australian Museum — Geraldton celebrates the rich heritage of the land, sea and people of the Mid West region.

Overlooking the Indian Ocean, the Museum of Geraldton celebrates the rich heritage of the land, sea and people of the Mid West region.

Enjoy a guided tour through the stories from four major early shipwrecks located in the region, the Batavia, Gilt Dragon, Zuytdorp, and Zeewijk or learn more about the discovery of HMAS Sydney (II), the pride of the fleet. Witness the wrecks of HMAS Sydney (II) and HSK Kormoran as they currently lie, 2,500 metres deep on the ocean floor, in From Great Depths, a moving exhibit and 3D film.

Discover ancient landforms, Yamaji history and culture, and the region’s natural landscapes and marine environment. Find out how more recent European exploration and settlement has developed the Mid-West including the agriculture, fishing, mining and science industries.

The archaeological riches from four Dutch shipwrecks - Batavia, Gilt Dragon, Zuytdorp, and Zeewijk, are revealed in the Shipwrecks Gallery. Visitors can join a guided highlights tour available daily at 11.30am.

The Museum’s shop has a great range of souvenirs, gifts and educational items suited to all ages and interests.

Take a walk through the Railway Station Museum and learn about fast shearers and big sheds of the Gascoyne shearing industry in the Shearing Hall of Fame.

This museum houses the Kimberley Steam Train, which was brought down from Broome in the 1950’s. It was the last steam train to operate in the North West. The Shark Bay Discovery Centre has been designed to showcase the significance and history of the Shark Bay region.

The centre’s informative displays; soundscapes, historical and contemporary film footage, interactive multimedia and objects of rare scientific and historical significance take you on the most amazing journey around Shark Bay and across time, in company and conversation with those who have been part of this extraordinary place.

Entry into the Museum will give you a two day pass. So if you don't get through everything in one day, just keep your receipt and you can return again the next day.

Shark Bay is considered to be one of the most significant areas of the world because of our unique ecological systems including the Stromatolites (the oldest living life form) and Shell Beach to the expansive sea grass beds which provide an important food source for the Dugongs and shelter for marine organisms Our Discovery and Visitor Centre showcases a museum exhibition displaying the whole area with its rich history. A visit to the museum will give you an insight into our incredible world heritage area and significant places of interest for you to see during your stay in the Bay. The Walkaway Station Museum is an impressive museum which will be of great interest to any rail enthusiast or historian.

Wander through the beautiful old railway station building to visualise how the station would have operated in the late 1800s. See where the station master lived and worked and learn about the history of this small community.

There are documents and memorabilia relating to the history of the Midland Railway Company. The museum also has records of local burials, family histories and photographs and other social history from the Walkaway area and surroundings. In the grounds there is an old locomotive called B6, the only one of its type left in the world. It is planned to put B6 in the Goods Shed (when refurbished) and other rolling stock will also be brought in for display.