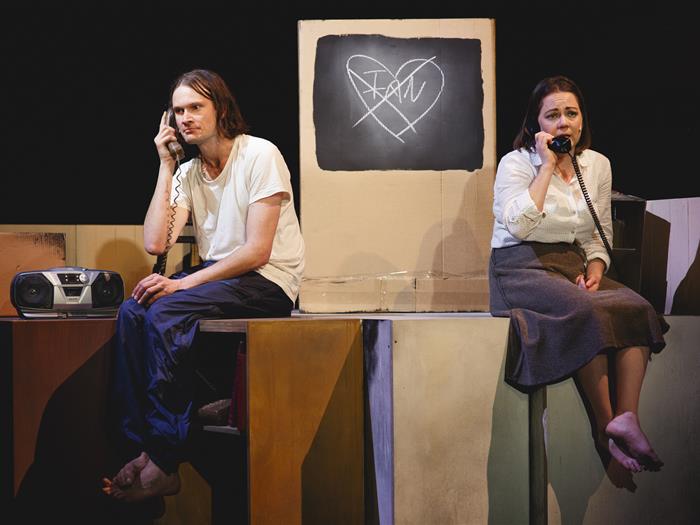 26 Jun, 2017
Web
Hilarious and confronting, this very human take on Lally Katz’s contemporary social drama from Black Swan State Theatre Company is not to be missed.

Brother and sister Abalone and Gerture (pronounced like ‘Goethe’) have been living together since their parents died in a freak pruning accident when they were children. Now adults, Gerture is in a failing relationship and teaches German at a local school, while the more intensely agoraphobic Abalone has his sights set on winning the Eisteddfod. In a bid to lure Gerture back to their room and away from spending more of her life outside in the real world, Abalone coaxes her into playing Lady Macbeth alongside his Macbeth. But will all his hard work pay off?

Director Jeffrey Jay Fowler has crafted a piece of theatre that is both confronting and hilariously funny. While this may be thanks in part to Katz’s talent as a playwright, it’s the two leads – Brendan Ewing as Abalone and Natalie Holmwood as Gerture – who truly bring the story to life. Their energetic, emotionally raw performances are packed with physical nuances that grab the attention and bring a lively vigour to Katz's script. Ewing’s Abalone is eccentric, kooky and a little perverted, while Holmwood’s Gerture is confused and desperate. Their unravelling of the relationship between the two characters creates some truly engaging theatre as they struggle through the messy emotions that come with being family.

At times it’s crude and provoking – a good time to point out that this is one for over 16’s only – but Ewing and Holmwood master this with such skill that none of it seems superfluous. The emotions the siblings experience, and their drive to chase the one thing they each think will make their lives better (for Abalone winning the Eistedfodd, for Gerture that one-way ticket to Moscow) resonate as being inherently human.

A contemplative and solidly entertaining piece of contemporary theatre, The Eisteddfod will have you racing through a mix of emotions, and leave you wondering what exactly it is that we each exist for.