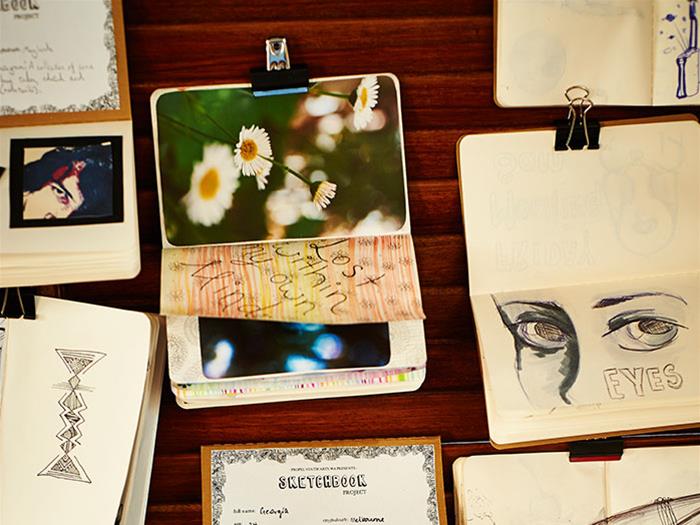 25 Jun, 2014
Web
A project encouraging young people to express themselves through sketchbooks offers a peek into the psyches of WA’s youth.

According to its coordinator, Ashlee Giblett, the Sketchbook Project that asks young people in WA to fill a sketchbook with their personal stories has no boundaries – “except to stay inside the book”.

The venture, run by Propel Youth Arts, sends out blank sketchbooks to people in WA aged 12 to 25, who fill them any way they fancy before sending them back. “Some are filled with photos from travels, illustrations, collages using magazines, buttons, fabrics, and poetry,” says Ashlee. “I have seen books where people have stitched images into the pages with yarn, created shapes by folding and slicing the pages, drawn comics strips and kept personal daily journals.”

But the books speak of more than idle scraps and scribbles – they share a piece of the artist. “Many use the Sketchbook Project to delve into issues that are important for them, such as depression, relationships, loss and sexuality. We often receive feedback that creating a sketchbook can be a cathartic and expressive process and a chance to say what’s on your mind, without actually having to ‘say’ it.”

This year, over 60 sketchbooks will go on an eight-month tour of libraries across Western Australia – from Manjimup to Port Hedland – culminating in an exhibition at the State Library of Western Australia at the end of the year. “Some of them will make you giggle, others will remind you of your first love or the sadness you felt when you lost someone or something special,” says Ashlee. “A young person in Exmouth will be able to read a sketchbook that somebody has created in Albany, and whilst they are miles apart they will be able to relate to what it’s like being a young person today. How great is that?”