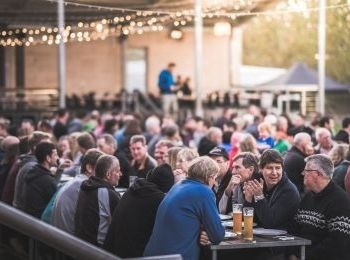 This is a flat topped limestone reef that projects out about 500m in to the waters of the bay.

The sides range from 1 metre high to 3 metres further out. A wide range of life lives along the walls and in the many nooks and crannies with in the limestone itself. The base of the ledges grade into rubble and then into the fine white sand which makes up the beach. As it is close to shore a surge develops towards low tide that can make the closer in section unpleasant.

Along these walls there is a number species of hard and soft corals offering some great photo opportunities. A wide range of fish are also seen. A survey done in south passage at the southern end of the island reported 323 species of fish. This end does not appear to be much less. The beach is a nesting beach for loggerhead turtles and they are often seen in the waters of the bay. Dolphins, sharks, whales, manta rays and whale sharks are also seen in this area.

The large fish feeding event in early 2001 which featured hundreds of sharks, Brydes and humpback whales and large pelagic fish was between this reef and cape Inscription.

DIRECTIONS: Northern point of Dirk Hartog Island, just to the east of the Cape Inscription Lighthouse. The main bit of reef runs out from the beach just east of the old jetty pylons. This is about 20 Nautical miles from Denham and is exposed in northerly weather. This is rare but caution is required. The crossing from Denham is good in most conditions. In rough seas head across to homestead bay and follow the coast up. unless you are experienced in offshore boating use one of the many charter boats working out of Denham.