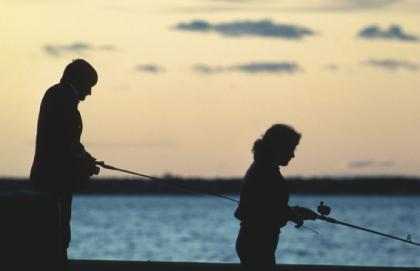 Cast a line or drop a pot off Rottnest and you could be reeling in tuna, snapper, squid and a whole range of delicious table fish.

Rottnest Island offers some top fishing spots thanks to its unique marine environment, which is quite different to the mainland coastline.

Rotto has a large number of sea grass meadows, which mean ideal conditions for fishing. In fact it’s second only to Shark Bay in this respect. The bigger range of habitats and sea plants means there are many more varieties of fish to catch and lots of places to put in a line.

In total there are around 360 kinds of fish and twenty species of coral found within the Marine Reserve.  Many fish that make good eating are in abundance right now including jewfish, king george whiting, snapper, sand whiting and herring. You’ll also find abalone, squid, cuttlefish and octopi in the waters around the island, not to mention plenty of tasty crustaceans.

If you’re partial to the reef-dwelling jewfish, it is mostly taken by handlines from moderately deep waters around the island, as is the king wrasse.  It’s possible to catch baldchin groper, cobbler, flathead, leatherjacket, samson fish, tailor, skippy and migratory fish such as marlin and tuna.

Those in the know head to the south side of Salmon Bay, the West End and Ricey Beach on the north side. The Basin and Parakeet Bay are also good spots, but fishing is restricted to non-daylight hours in these two locations.

While many fishermen go in search of the blue manna crab, the most popular catch is the western rock lobster, which is only found along the west coast between the North West Cape and Cape Leeuwin. Those that don’t end up in a cray pot or on the menu at a Perth restaurant are exported to the US and Japan.

If you’re planning on doing some fishing during a stint on the island you can pick up the whole kit and caboodle from the local General Store, Geordie Bay General Store and Malibu Dive.  They stock everything from burley and bait to hooks, lines, rods and reels.

If you’d rather bring your own and don’t own a boat, all Rottnest ferry companies allow you to take rods on board, but they’ll need to be labelled and given to the deck hand on departure from the mainland for safe storage.

The Rottnest Air Taxi will also allow you take rods as long as they can be pulled apart into smaller pieces.

As the waters around Rottnest form a marine reserve there are some fishing restrictions in place: spearguns, gidgies and net fishing are prohibited and two sanctuary/no fishing zones apply at Kingston Reef and Parker Point. The Department of Fisheries can provide advice on regulations, seasons and bag limits. Visit www.fish.wa.gov.au for further details.

The Rottnest Island Authority has produced a handy guide to boating and fishing which is available from the visitor centre on the island.

Don't have a boat? Get to the Island by air or ferry: