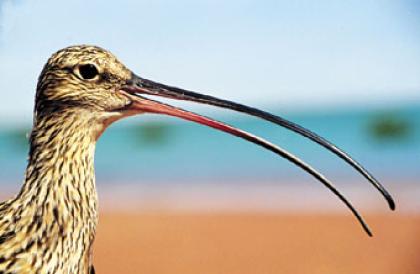 Birdwatching in the Kimberley

The Kimberley is a bird watcher's paradise and this spring migratory birds fly to the area from as far away as Siberia. From a bird Observatory to a world heritage listed wetland, discover the best ways to meet the region's most exotic birds.

The Kimberley is a bird watcher's paradise and this spring migratory birds fly to the area from as far away as Siberia. From a bird Observatory to a world heritage listed wetland, discover the best ways to meet the region's most exotic birds.

The North-West is considered one of the world's most significant shorebird viewing sites. Broome has the highest population of shorebirds thanks to the range of varied habitats in the area including massive inter-tidal mudflats, freshwater lakes and marshes, open grassy plains and Pindan scrub. Over 300 bird species have been recorded in and around Broome - more than one third of Australia's total species. More than 800,000 birds migrate to the region each year from September through to March and travel from places as far away as the Arctic Tundra and Siberia. More then 22 of the 24 Australian Raptor species have also been recorded in the area.

A great place for bird watching is The Broome Bird Observatory at Roebuck Bay. The Observatory is located 25km east of Broome and was established 15 years ago as a research and education facility. Its principle aim is the conservation of migratory shorebirds that come to the area.

For those who wish to spend a couple of days The Observatory offers guests overnight facilities including both powered camp sites and chalets. You will see literally thousands of birds on the Roebuck Plains. They are at their most active at sunrise or at dusk so if you want to see the birds at their best, staying overnight is the way to go. The Observatory also runs a number of tours including the Shore Bird Tour, the Mangrove Bird tour, and the Bushbird Safari. The tours are popular with experienced bird watchers and avid enthusiasts because guests are taken to locations such as the privately owned Roebuck Plains Station, which is usually closed to the public. All tours include binoculars, telescopes, guides and light refreshments.

If you're looking to brush-up on your knowledge of birds in the area, the Observatory boasts a library, a video and slide room and marked trails to guide you to the best bird watching sites. They also run the Birds of the Broome Region course from September 22 - 26. During the week you will be introduced to the different habitats in the area, be taken to the best spots to see the rarest birds such as the Siberian Shorebirds and be taught the names and identifying features of the species you meet. The course cost $780 for five days and four nights and includes accommodation, all meals and guided tuition.

If you don't mind travelling a little further to see some magnificent birds, Parrys Creek Farm is located midway between Wyndham and Kununurra on the Parry Creek Billabong in the Kimberley's far North-East. The Parry Creek Billabong is one of the many that make up the Parry Lagoon where bird watching is almost as popular as fishing for Barra. Parrys Creek Farm offers the chance to sleep amongst the bird life in accommodation set almost right on top of the sanctuary. The accommodation includes private cabins with balconies overlooking the Billabong, or campsites set right on the Billabong's edge.

Parrys Creek Farm is a destination suited to experienced bird-watchers. They don't run specific tours so you will need to bring you own bird-watching equipment with you. They do, however, have a logbook where keen birdwatchers record the species spotted. Some of the most recent species noted include Magpie Geese, Great Egrets, Royal Spoonbills, Zebra and Crimson Finches, Kingfishers, Brolgas and Shell Ducks.

Marglu Billabong is the largest at Parry Lagoon and is situated 3km north-west from Parry Creek Farm. Marglu is home to a bird-hide where visitors can sit and spot exotic waterbirds. The billabong is a world heritage listed wetland and although there are no guided tours available there is an information booth that can help you identify specific species. Again, those who are really serious about their bird watching will need to bring their own equipment. Some of the more impressive species recently seen at Marglu Billabong include Straw Neck Ibis', White Breasted Sea Eagles and Rainbow Bee-Eaters.

If you're not familiar with the bird species in the area and need help spotting and identifying the different breeds head to Kununurra where JJJ Tours will spoil you with a cruise down the Ord River and Lake Argyle while pointing out the area's prolific bird life. Your tour guides are experts on the birds in the region and will introduce you to species such as, Cormorants, Kingfishers, Pelicans, Black-Necked Storks, White Bellied Sea Eagles and Ospreys. JJJ will provide binoculars and detailed information on the species encountered (although we are told that a couple of days are necessary to spot most of the 150 species in the area).

OTHER STUFF:
This is a magnificent season to visit Western Australia's top end. Access to most parts of the Kimberley is easy by air or road and you're guaranteed almost no rain for the majority of the season. If bird watching doesn't take your fancy, try your hand at horse riding, take a scenic aerial tour, a camel ride in Broome or simply spend your days lazily fishing on the Ord River. For more information on the wide range of activities available in the Kimberley this season log onto scooptraveller.com.au.