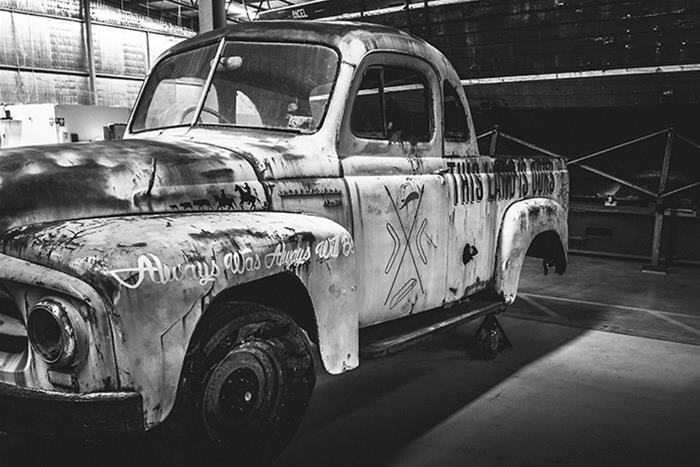 Night at the museum

29 Jun, 2015
Web
In a nondescript, eastern suburbs warehouse, a huge and spectacular (but little known) collection of artefacts is under wraps. Scoop brings you this sneak peek inside the WA Museum’s Collection and Research Centre.

The Western Australian Museum’s fascinating 120-year history documents the state’s rich natural and cultural heritage, featuring nearly 8 million objects in its incredibly diverse exhibits – from dozens of insects in a single jar, to a single piece of Mars.

Established in the old Perth gaol in 1891, its collections were originally geological, ethnological and biological. In 1959, the botanical collection was transferred to the new Western Australian Herbarium, and the museum focused its collection and research interests in the areas of natural sciences, anthropology, archaeology and WA history. Over the 1960s and 1970s it also began to work in the emerging areas of historic shipwrecks and Aboriginal site management.

Behind the scenes, the WA Museum’s many scientists, curators, research associates and volunteers work together in a sprawling climate-controlled facility in Welshpool – the Collections and Research Centre.

The diverse experts work in the fields of terrestrial zoology, aquatic zoology, earth and planetary sciences, history, anthropology and archaeology. While the museum’s maritime archaeology and maritime history departments are based at sites in Fremantle, some of those extensive collections are also housed in Welshpool. The WA Museum’s exploration of the natural world has seen its scientists and researchers delve deep into Earth’s mysterious underground in search of Australia’s forgotten beasts, leading to unique finds like the ancient predator Thylacoleo carnifex. Cutting-edge biodiversity research in the Kimberley, meanwhile, has resulted in thousands of marine specimens being collected for study in the Welshpool laboratories, plus the discovery of hundreds of new animal species and minerals unique to Western Australia.

The study of culture and communities revolves around a central, integral question: what does it mean to be human? Again, through the objects in its collections, the WA Museum’s researchers and curators help us unravel some of the complexities and mysteries of human history. Who we are and how we live is revealed through artefacts like a little boy’s home-made wartime toy, examples of intricately woven Aboriginal baskets, and thousands of coins collected from 17th century Dutch ships wrecked along our coast. There are also 19th century porcelain tea sets, 20th century weapons, and a 21st century asylum-seeker boat.

The Western Australian Museum has a strong commitment to sharing stories that help people explore their identity, culture, environment and sense of place. To learn more about the Collection and Research Centre, visit the online collection at museum.wa.gov.au/museums/collection-and-research-centre. Among the most vibrant items in the marine invertebrates collection are these seastars and sea urchins. The brilliant orange and white seastar Pentagonaster dubeni was collected in 9m of water at Quindalup, Geographe Bay. 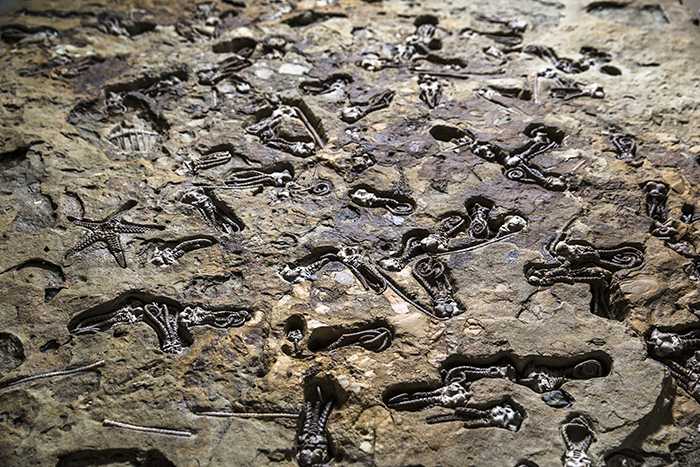 It may look like an Alien film prop, but this Cundlego Formation sandstone slab was actually found near Gascoyne Junction. The piece is is 280 million years old and littered with superbly preserved crinoids (sea lilies) and undescribed species of sea stars and brittle stars that were abundant around 450-250 million years ago. Donated by Mark Creasy. Many readers will recall the WA Museum’s blue whale skeleton from the marine gallery of the Francis Street building. The animal washed ashore at the mouth of the Vasse River in 1898. These five vertebrae, and the rest of the bones, await restoration and a prominent position in the new museum building. Most meteorites are 4.56 billion years old and mark the birth of the Solar System. Some are much younger, however, such as this Nakhla meteorite, which could only have been knocked off a planet. Gases extracted from pockets of glass inside younger meteorites like this match the Martian atmosphere analysed by NASAs Viking landers in the mid-1970s. The Blackwell collection of turned wooden bowls represents many WA native and introduced timbers. In curating it, prominent botanist and landscape architect Marion Blackwell aimed to recognise the unique beauty of our floral heritage and the full range of its colour and organic forms. 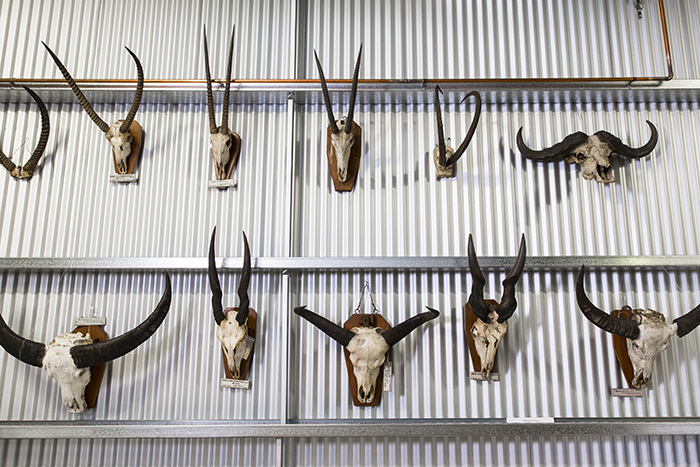 There are 110 historic mammal trophy heads and skulls in the collection. Two Indian buffalo skulls were acquired from the Northern Territory by collector John Tunney in 1903. Others, from Africa, were donated by the likes of Sir Arthur Lawley, 13th Governor of WA. Nine-year-old Rita Lloyd wore this silk dress to a Perth ball back in 1909. Representing Great Britain’s extensive empire, it was donated by Rita’s granddaughter Jennifer Collins in 1987. 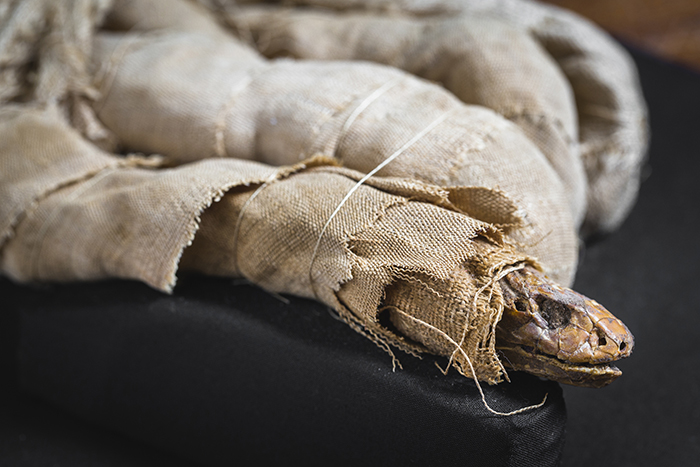 This mummified Egyptian cobra was wrapped in linen strips between 2000 and 3000 years ago as an offering to a serpent deity to prevent snake bite, or to provide a direct link to the god. It was collected in Thebes, where the goddess of the necropolis was Meretseger (She who loves silence). Collector TS Henry, 1897. These dragon and skink lizard specimens were collected by Western
Australian Museum researchers on a recent survey of the Pilbara region. They will be used, with their genetic information, to look at the diversity and evolution of reptiles in the Pilbara. The intrepid folk at the WA Museum are going ga-ga about their new, cutting-edge X-ray machine, which can expose complex structures in tantalising detail, like the ‘age’ rings in this White Shark backbone (above left).  Radiographs allow the study of a skeleton without the need for dissecting or altering a specimen. The study of fish skeletons, fin spines and teeth helps scientists to examine fish anatomy, to differentiate one species from another, and to determine their evolutionary development and relationships.
Images are available for purchase at
www.museum.wa.gov.au/xray-prints.