Mt Lawley is a lively hub known for its nightlife and dining spots. Gourmet burger joints and courtyard beer gardens sit alongside boutiques filled with locally made clothes and accessories. Take a short walk out of the main city centre and you’ll find Hyde Park, filled with lush green trees and resident black swans. After global success, Lit Crawl comes to Perth for the very first time to get revellers and book lovers alike drunk on words - and alcohol.

The Lit Crawl phenomenon is described by The New York Times as ‘a heady cocktail of booze and books’. After appearing in cities across the globe, it heads to Perth in a collaboration with the City of Vincent and Beaufort Street Network.

The first ever Lit Crawl Perth will capture the city’s unique WA flavour and get readers and writers out on the streets of Mt Lawley. WAAPA In The Park

An annual tradition since 2007, WAAPA in the Park is a family- friendly evening of fabulous music performed in Ron Stone Park. The City of Stirling, Edith Cowan University and WAAPA proudly present Australia's premier performing arts academy in concert. Be wowed by the outstanding Latin Ensemble and WAAPA's most accomplished Jazz and Contemporary musicians as they rock, bop and strut their way through an awesome collection of old and new funk, soul, pop and jazz classics. Bring your picnic rug and hamper, and enjoy an evening of exciting musical talent and showmanship.

Actor and director Sean O’Shea returns to his alma mater to direct William Shakespeare's definitive revenge tragedy. Hamlet, Prince of Denmark, is called home from university to end his life turned upside down. His uncle Claudius has murdered his father and taken the throne; his mother has married the usurper. Hamlet’s mission to expose the truth and avenge his father’s brutal death is a perilous journey of murder, madness and lost love that has devastating consequences for his family and the kingdom. 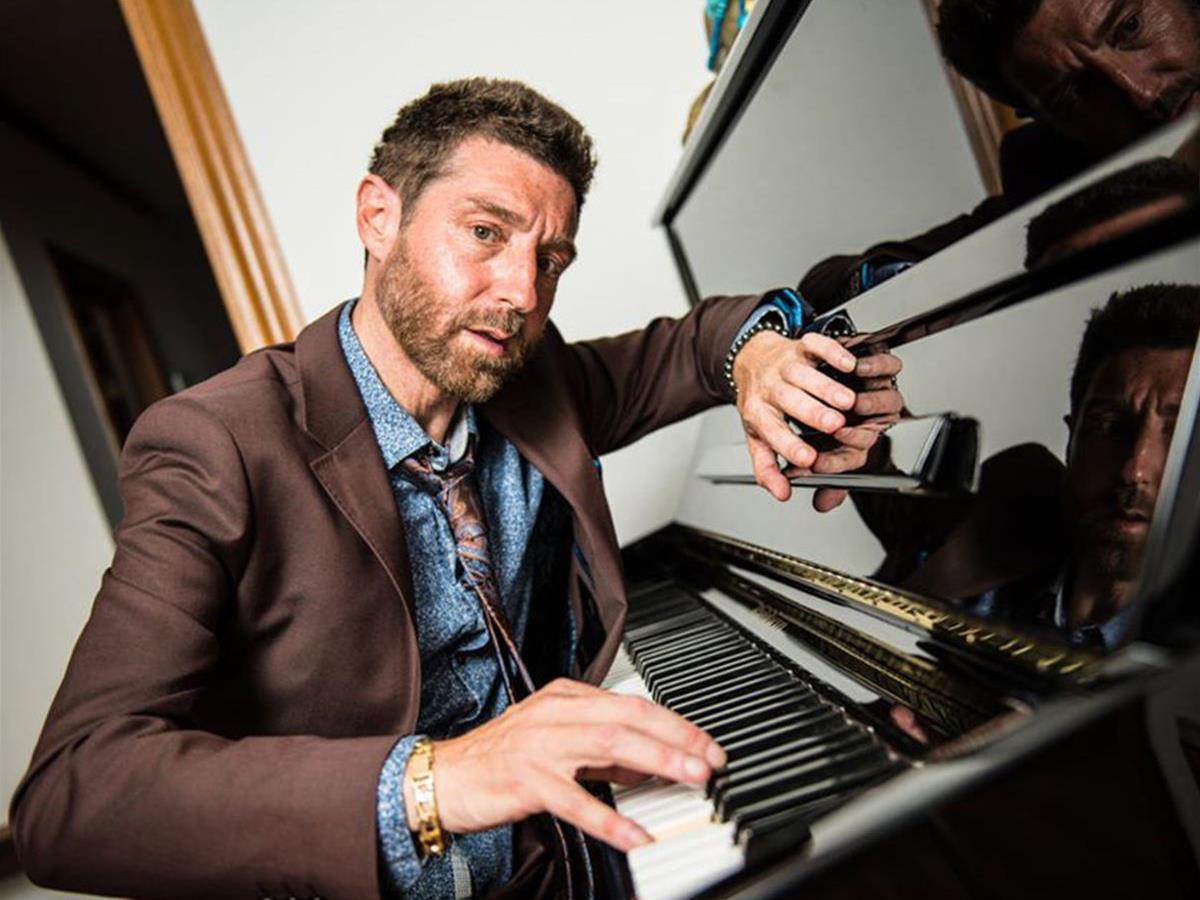 Benny Green has been hailed as the most exciting, hard-swinging, hard-bop pianist to ever emerge from Art Blakey’s Jazz Messengers. Benny has recorded, performed and collaborated with celebrated artists including Ray Brown, Betty Carter, Freddie Hubbard and Oscar Peterson. In this special concert, Benny will share his outstanding artistry accompanied by WAAPA’s talented instrumentalists and vocalists in an evening of exceptional swing and groove. Benny will lead us through jazz’s roots and offshoots - including the blues, bebop, hard-bop and more modern styles.

Benny Green’s visit is generously supported by Brigid and Ronald W. Woss AM of the Woss Group of Companies. Orpheus In The Underworld

An epic performance of Offenbach's masterpiece Orpheus in the Underworld.

Paris, 1889... The perfect meeting point for high society and high fashion. The ideal rendezvous for God-like men and beautiful women. At a time when public opinion demands strict morals of all Parisians, how is it the artists of the Moulin Rouge can celebrate their liberte´, e´galite´ and fraternite´ with wild abandon? Come with us as we peel back the layers of French society and descend into the cabaret underworld of the 'city of love'. Celebrated Perth violinist Paul Wright teams up with the WAAPA symphony orchestra for a 250th birthday celebration like no other!

The WAAPA Symphony Orchestra celebrates the 250th anniversary of Ludwig van Beethoven's birth in style, performing some of the most dynamic and beautiful music of all time. WAAPA's Head of Strings Paul Wright directs the orchestra in Beethoven's gorgeous Pastoral Symphony, inspired by the composer's legendary love of nature. You’ll also hear Mozart's exquisite Violin Concerto No 5 performed by Paul Wright. It’s a 250th birthday party like no other!

"I believe in God, Mozart and Beethoven." – Richard Wagner The World Of Beethoven

A night showcasing the very finest of Beethoven’s piano repertoire in commemoration of his 250th birthday.

From the light and playful to the passionate and dramatic, Ludwig van Beethoven’s piano music is beloved repertoire for performers and enduringly popular with audiences. Much of Beethoven’s piano music is expressed through his sonatas, with plenty of magnificent works that are timeless classics. To commemorate the 250th anniversary since this musical genius was born, WAAPA's piano students and staff invite you to immerse yourself in the world of Beethoven's magical piano music. An end-of-year performance from WAAPA's Aboriginal Performance cohort that celebrates the tradition and heritage of Australia's Indigenous people.

Join us in celebrating the talents of WAAPA’s 2020 Aboriginal Performance cohort, as they take to the stage in the end-of-year public performance that marks the finale to their year of training. A showcase for their acting and performance skills, this dramatic work demonstrates contemporary Indigenous performance and culture as we applaud the achievements of the 2020 ensemble. Icon celebrates the enormous influence of German choreographer Pina Bausch on generations of dance makers and performers around the world.

In an international first, the Minderoo Foundation supports the remount of Pina Bausch’s Tannha¨user Bacchanal*. Danced by WAAPA students, this is the first time Tannha¨user Bacchanal will be performed outside of Germany and the first-ever performance of Pina Bausch's work in Perth. Widely considered to be the precursor to Bausch's famous The Rite of Spring, Tannha¨user Bacchanal will be taught by leading artist-in-residence Barbara Kaufmann supported by Marigia Maggipinto, both long-standing members of the Tanztheater Wuppertal. The Minderoo Foundation is proud to partner with WAAPA to bring these world-class arts practitioners to Perth as part of the Visiting Artist program.

Meryl Tankard, Chants de Mariage
Meryl Tankard is one of Australia’s finest contemporary dancers and an international artist in her own right. Tankard, a former Pina Bausch company member from 1978 to 1984, will remount her Chants de Mariage with assistance from award-winning local choreographer Paige Gordon. This 1991 work for an all-female cast is a dialogue about ritual, secrets, deception and sacred vows.

The devil tricks a soldier into giving up his violin in return for a book that tells the future... Igor Stravinsky brings to life the famous Russian folktale about the value of human spirit in the face of greed and materialism. WAAPA’s Executive Dean, David Shirley joins the Indian Ocean Ensemble and students from WAAPA’s Performance Making course to revel in one of the most influential and dramatic works of the past century. The Seven Seas world music ensemble also performs a new work filled with imagination and virtuosity. Walk Off The Earth

Following a sold out 2017 tour, Canadian indie pop band Walk off the Earth are set to return to Australia in January 2020 for another string of spectacular performances.

Walk off the Earth is a Juno Award winning, multi-platinum musical phenomenon currently taking the world by storm. Their brilliant 5-people-playing-one-guitar interpretation of Gotye's “Somebody That I Used To Know” exploded on YouTube, garnering over 180 million views. Since then, the band has released a string of successful original songs, sold out venues across the globe, and collaborated with some of the biggest artists in the world (including Keith Urban, Snoop Dogg, Nicky Romero & Steve Aoki).

The group’s independent spirit, unstoppable work ethic, and awe-inspiring creativity has catapulted them into new and uncharted waters with only bigger and better things on the horizon. Australian fans can expect to experience nothing short of a high energy pop spectacle that will have them up out of their seats and dancing all night long. The 2020 World Tour lands in Perth in January at the Astor Theatre, for a unqiue performance from the striking Louisianna Singer!

"This year has been life changing," says Daigle. "There's no better feeling than to be able to look out from the stage and see how people have connected with the songs on this album. Our shows feel like one big party of togetherness, and I can't wait to create a whole new tour for 2020. It's going to be so much fun!"

The Lauren Daigle World Tour features an all new stage production, deisgn and set list that will be highlighted by Daigle's raw vocal power and stage presence. She will feature some of her hits, including her latest single Rescue and the double-platinum selling single You Say, as well as tracks from her previous platinum-selling album, How Can it Be. The Stranglers - "The Classical Collection" Tour

The Stranglers return February 2020 to deliver a set for the ages, drawn from their eloquent and extensive catalogue spanning over 40 years.

Hailed for their highly original sound, combining a brilliant melodic touch with a genuine dark aggression and effortless cool, The Stranglers are now recognised as one of the most credible and influential bands to have emerged from the punk era.

Now over 45 years on, with 24 top 40 singles and 18 top 40 albums under their belt, The Stranglers are still finding the time to hit the road, making their return to Australia this February 2020.

First forming in 1974, the band’s no bullshit attitude saw them blaze an experimental trail, from Art Rock to Goth to New Wave Pop, inspiring a wave of prog rock guitar players and confrontational vocalists to find their roots in The Stranglers’ unabashed confidence. Their longevity and impact solidified with hits like Golden Brown, Always the Sun, No More Heroes, Strange Little Girl and Peaches – all establishing the legend of The Stranglers. Gordon Hendricks - The Spirit Of Elvis

Gordon is returning to Australia in 2020 on his second National Tour, performing again all your favourite Elvis songs, re-creating those magical moments in a stunning three hour show.  Backed by the Legends TCB band and The Memphis Belles singers.

Gordon is a multi award winner in Canada, having won the largest Elvis festival competition in the world twice, the prestigious 2014 & 2017 ‘COLLINGWOOD ELVIS GRAND CHAMPION’ the only artist to win it TWICE and the first to be attended by Priscilla Presley.

Gordon Hendricks is the most decorated ELVIS tribute artist in the UK and Europe. Winner of the UK‘s National TV show ‘Stars in their eyes’ by a record margin.

It’s as if Elvis himself is on stage. MAYBE, JUST MAYBE, HE IS.

“I think he just keeps getting better and better. His show is a nice devotion to keeping

“Thanks for telling me about Gordon, he is very good” – JERRY SCHEFF, Elvis Bass Guitarist. Legendary singer-songwriter Nick Lowe returns to Australia for the first time since 2012, backed by the incredible Los Straitjackets!

One of the most influential musicians of his generation, the silver-haired, tender-hearted but sharp-tongued singer-songwriter boasts a catalogue of immortal songs from ‘Cruel to Be Kind’ to ‘(What’s So Funny ‘Bout) Peace Love and Understanding’, ‘All Men Are Liars’ to ‘The Beast in Me’ and many more beyond.

Los Straitjackets are the leading practitioners of the lost art of the guitar instrumental. Using the music of the Ventures, The Shadows, and with Link Wray and Dick Dale as a jumping off point, the band has taken their unique, high energy brand of original rock & roll around the world. Clad in their trademark Lucha Libre Mexican wrestling masks, the “Jackets” have delivered their trademark guitar licks to 16 albums, thousands of concerts and dozens of films and TV shows.