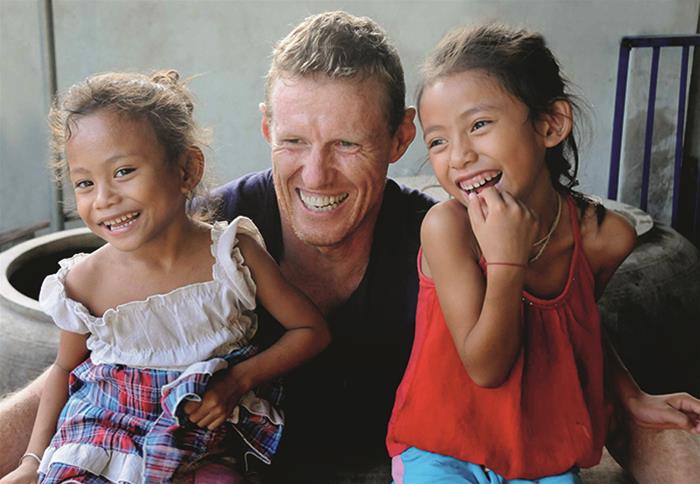 15 Dec, 2015
Web
When a Hollywood mogul found himself at a Phnom Penh garbage dump inhabited by scavenging children, he felt compelled to act, leaving his multi-million dollar lifestyle behind.

Passing through Cambodia in 2003, Sony Pictures executive vice-president Scott Neeson was taking a break from his hectic, high-powered life. But when a local friend took him to the poorest part of the capital Phnom Penh – a notorious slum called Steung Meanchey – his world was shaken to its foundations.

“It was over 50 degrees Celsius and the ground was on fire,” he recalls. “The heat was unbearable, and the smell… It was impossible to breathe. Children not only worked there, but when they got exhausted they’d burrow in the garbage and sleep.

“Some of them had been doing that for three, four, five years – that was their day, every single day. You can only imagine what they’ve ingested, both physically and emotionally.”

Scott returned to Cambodia several times that year, but it was a call from a major star which crystallised his resolve to move there permanently. The actor in question was phoning to complain about the food on his private jet – as Scott stood among the dump’s burning waste, surrounded by abandoned children searching for recyclables, the actor’s voice came down the line: “My life wasn’t meant to be this difficult.” “Talk about validation,” says Scott, who was invited recently by friends and long-time supporters in the Perth business community to visit the city alongside His Holiness the Dalai Lama. “It was a moment of clarity, and relief, actually. I was there on holiday, to get away from Hollywood. I had no expectations for anything more. The way I ended up in the garbage dump was so utterly random… but His Holiness says there’s no such thing as coincidence.

“You can be successful, wealthy and have material things, but that doesn’t affect your happiness… it doesn’t feed anything,” says Scott, who believes consumerism is a concept we literally buy into, in the elusive hunt for happiness. “I’ve met some of the richest people in the world while doing this and I don’t think I’d swap places with any of them.

“In Perth, where there’s a lot of wealthy people, I think it’s a little sad that they’re
all looking for something. I get asked a lot, but you can’t explain it… You have to go through your own journey.” Scott’s journey has covered most of the globe. Born in Scotland and raised in South Australia, the self-proclaimed ‘ratbag student’ dropped out of high school and worked his way up the ranks of the Australian film industry, before moving to LA in 1993. There, he forged a high-flying career, managing the release of blockbusters like Braveheart and Titanic, and enjoying a million-dollar lifestyle filled with sports cars, boats and film-star friends.

It was all this that he gave up in 2004 to establish the Cambodian Children’s
Fund (CCF). What started then as a frontline organisation caring for 87 children has since become a global charity helping 10,000 people each year. CCF provides vital services to some of Cambodia’s most impoverished communities, including education, childcare, community outreach, health care and vocational training. Rather than throw money at the problem, CCF’s programs foster self-sufficiency, and preserve local traditions and culture.

“Hope is a wonderful thing,” says Scott, who jokingly refers to himself as a kind of ‘Mother Teresa in cargo pants’. “You’re not doing them any favours, you’re just doing what is fair – charity inevitably leads to spite.”

Child sponsorship has been an integral part of the organisation’s model since the beginning, and comes with strict rules about participation by the kids. “If you don’t write, you get removed from the program,” he says, by way of example. “One thing these children have always lacked is consistency.”

Scott’s passion for photography has left him with an estimated 250,000 images of the community and, like a proud father, he has a few on-hand to show. “I found her in my early days,” he says, holding up a picture of one girl. “She was left (at the dump) with her baby bottle. Now she’s starting Year 12.” He scrolls through the images. “This one is doing a degree in education; she wants to give back. When we found her, she weighed 15 kilos. She’s my pride and joy.” He mentions two siblings, aged 3 and 4, who were recently left on the dump when their mother ran off with a new boyfriend. CCF reunited the children with their grandmother, and all three of them now live in a provided home. “There’s a million of them,” he says. “There are some very sad cases.” Rampant sexual abuse and the “appalling” level of arrests and prosecutions prompted CCF to establish the Child Protection Unit (CPU) in late 2013. A landmark taskforce, created with the Cambodian National Police and headed
by a team of Australian investigators, its task is to break the cycle of corruption, and find justice for child victims. Scott says the arrest rate in such cases used to be about 50 to 60 per year; in the last twelve months, CPU has obtained nearly 310 arrests – 86 per cent of all cases.

The perpetrators brought to book by the taskforce even include a two-star general. “Despite all his connections and money, he’s going to jail for a very long time.” It’s a great deal of suffering and depravity to be exposed to – surely it
must get on top of him? “Oh yes,” Scott admits, “especially at night time when it’s dead quiet. You’ve got to watch out for where your mind takes you. I miss (my old life) all the time. When you’re looking for missing children, up to your knees in garbage, there are times I’d rather have a Porsche, have a good relationship… But in terms of regret? None at all.”