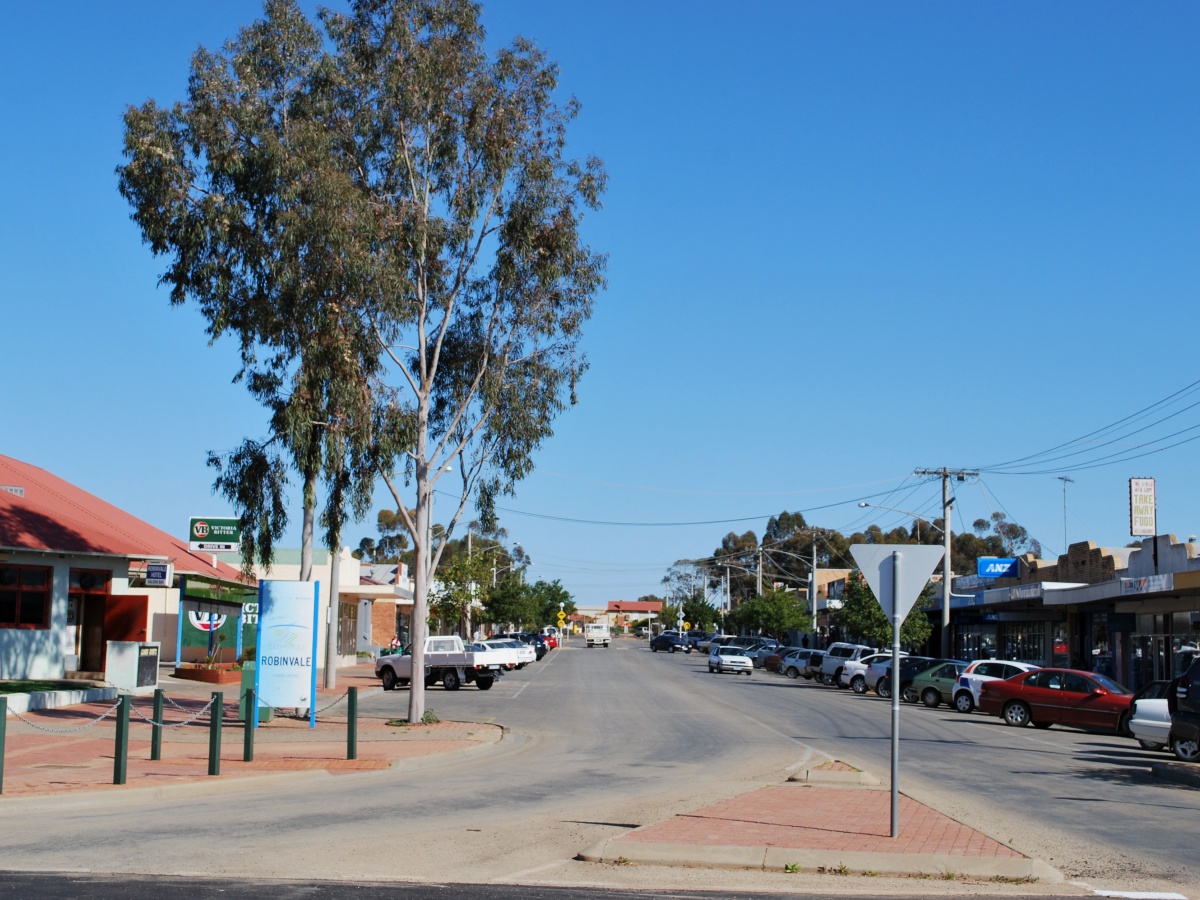 Robinvale is a town on the south bank of the Murray River in north western Victoria, Australia.

Robinvale is a town on the south bank of the Murray River in north western Victoria, Australia.It is connected by a bridge to Euston on the other side of the river in New South Wales.At the 2016 census, Robinvale had a population of 3,313, however a population study conducted by the Rural City of Swan Hill that was undertaken in 2019 identified Robinvale had an estimated population of between 7,000 in November and 8,800 in March each year. # History The Robinvale region is home to at least five indigenous groups with traditional ownership belonging to people from the Latji Latji and Tatitati/Dadi Dadi people. The region, particularly Bumbang Island houses a large number of culturally significant sites and heritage items. The town is named in memory of Lieutenant George Robin Cuttle, who was killed in action during air combat over France in 1918. The Post Office opened in 1924 as Bumbang, but was renamed Robinvale in August of that year.Robinvale was connected to the rest of the Victorian railway network when the line from Manangatang was opened in 1924. The combined rail-road bridge across the river at Robinvale, which was constructed as part of the project, continued to be used until 2006, when a new road bridge was opened. The lifting span of the former rail-road bridge has been placed in a nearby park, as a permanent historical display.Lock 15 on the Murray River is just downstream of the town providing a pool of irrigation water and ensuring that the river near Robinvale is permanently available for water activities such as water skiing. The weir and lock were completed in 1937, the last one built on the Murray (Locks 12–14 and 16–25 were never built). The town, fictionalised as "Sunray", was the setting of the 1996 Australian feature film Love Serenade, directed by Shirley Barrett, which won the Caméra d'Or award at the 1996 Cannes Film Festival. # Weather # Things to do Robinvale is known for production of grapes, olives, carrots and almonds. There are many attractions in Robinvale, such as the original home of Robin Cuttle, an antique museum, park, and a caravan park overlooking the Murray River. The river is home to a great array of native birds and fish such as the pelican, swan, perch and the murray cod. Robinvale is a popular camping area on the Murray. Robinvale has a rail line that is used seasonally by Pacific National freight trains. V/Line runs coach services to Swan Hill and Mildura, Victoria, connecting with train services to Melbourne at Swan Hill railway station.Robinvale Airport serves the town. Robinvale and its twin town, Euston is home to an Italian population from the southern region of Calabria in Italy. It also has immigrant populations of Tongans and Vietnamese and a significant Aboriginal community, with Aboriginal people making up 8.1% of the population as of 2016 . Robinvale also had an irrigation project funded by Lower Murray Water, completed in late 2010.