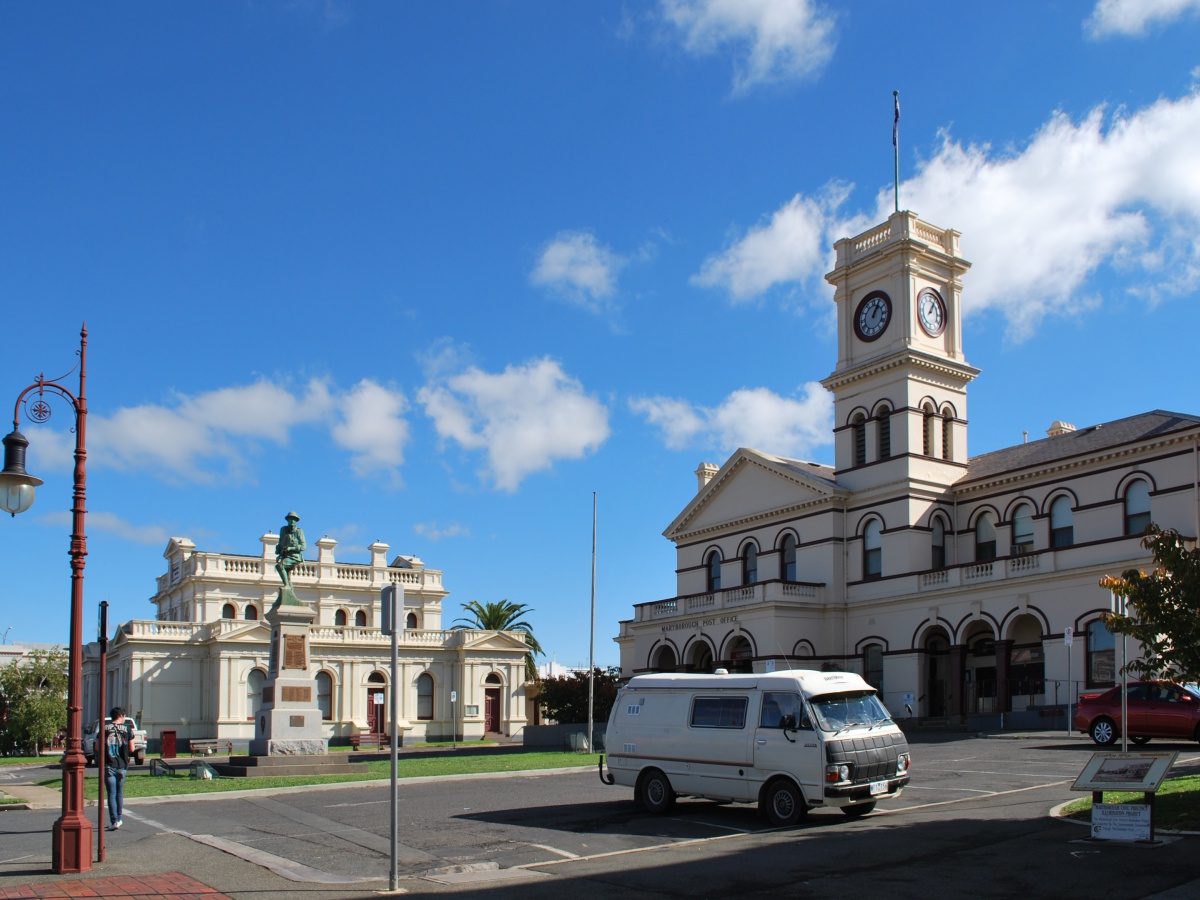 Maryborough is a town in Victoria, Australia, on the Pyrenees Highway, 58 kilometres (36 mi) north of Ballarat and 168 kilometres (104 mi) northwest of Melbourne, in the Shire of Central Goldfields.

Maryborough is a town in Victoria, Australia, on the Pyrenees Highway, 58 kilometres (36 mi) north of Ballarat and 168 kilometres (104 mi) northwest of Melbourne, in the Shire of Central Goldfields. At the 2016 census, it had a population of 7,921. # History The area was originally inhabited by the Dja Dja Wurrung people. The first Europeans to settle there were the Simson brothers, who established a sheep station, known as Charlotte Plains, in 1840. In 1854, gold was discovered at White Hill, four kilometres north of Maryborough, attracting a rush of prospectors to the area. At its peak, Maryborough reportedly had a population of up to 50,000, although local historian Betty Osborn, of Maryborough-Midlands Historical Society Inc., claims it was closer to 30,000. The town site was surveyed in 1854, with a police camp, Methodist church, and hospital amongst the first infrastructure. The post office opened on 19 October 1854.The settlement, originally known as Simsons, was renamed Maryborough by gold commissioner James Daly after his Irish birthplace. One of Victoria's earliest newspapers, The Maryborough Advertiser, was established in 1854. Land sales commenced in 1856, and Maryborough became the area's administrative and commercial centre. It became a borough in 1857. The last gold mine in Maryborough closed in 1918. In 1924 the Maryborough Knitting Mills opened, establishing the town as a centre for the wool industry. Maryborough became a city in 1961. # Weather Maryborough enjoys a temperate climate with four distinct seasons and is typically dry and mild. The mean minimum January temperature 12.9 °C (55.2 °F) with the maximum a balmy 28.8 °C (83.8 °F), however temperatures above 35 °C (95 °F) are commonly recorded during the summer months. The highest temperature ever recorded was 45.4 °C (113.7 °F) on 7 February 2009. The mean minimum temperature in July is 3.4 °C (38.1 °F), with and average maximum of 12.2 °C (54.0 °F). The lowest ever recorded minimum in the city was -4.6 °C (23.7 °F) on 21 July 1982. Although the city experiences little snow due to its low elevation, frosts are common during the colder winter months.The city averages 528.1 millimetres (20.8 in) rainfall annually, with a slightly more rainfall falling in the second half of the year, generally only experienced in short bursts of showers, rather than extended periods of rainfall. The dryness of the area, due to poor topographical features places significant pressure on water reserves. Maryborough ended of one of the longest droughts on record during the 2010/2011 summer when it experience some of the highest rainfall on recorded which caused flooding throughout the local area. The city is currently on permanent water restrictions. ## Bushfires Maryborough has been threatened by bushfires on multiple occasions, most notably in January 1985 when a large fire devastated the surrounding area resulting in 3 deaths and 180 homes lost. # Things to do