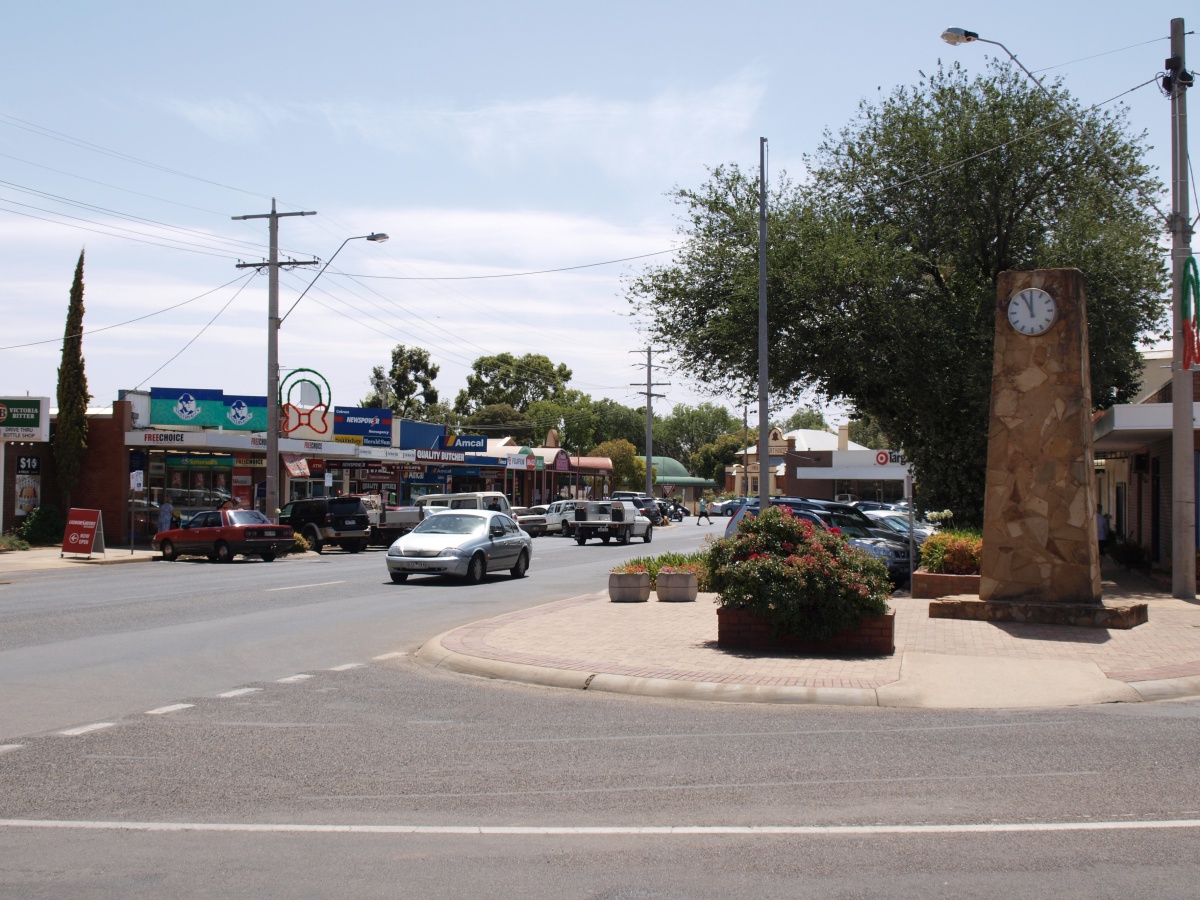 Cobram is a town in the Australian state of Victoria.

Cobramis a town in the Australian state of Victoria. It is on the Murray River which forms the border between Victoria and New South Wales.Cobram along with the nearby towns of Numurkah and Yarrawonga is part of Shire of Moira and is the administrative centre of the council. Its twin town of Barooga is located on the north side of the Murray River. Surrounding Cobram are a number of orchards, dairy farms and wineries. At the 2016 census, Cobram had a population of 6,014. Barooga's population is currently 1,817. # History Aboriginals, although they had disappeared from the area prior to European settlement, were believed to inhabit the stretch of region bound by the Murray River from Tocumwal to the east of Cobram and south as far as the Broken Creek. Unfortunately, the area bound by Melbourne, Echuca and Albury was a trouble area for recording Aboriginal presence. The main tribe believed to have occupied the area were the Bangerang. A 'horde', or smaller grouping of about 100 persons, named Angootheraban, are believed to have lived in the immediate Cobram area.Charles Sturt first passed through the region on the northern bank of the Murray River in June 1838 en route to South Australia, leading a cattle droving party, with 300 head of cattle.In January 1845, Octavius Phillpotts established Cobram station between the already existing Yarrawonga and Strathmerton stations, located where Cobram East now is. This was divided into the Cobram and St. James stations in 1855.By the 1860s, present day Cobram still hadn't begun to exist, and the area was still broadly referred to as Yarroweyah. In 1868, the old township of Cobram, bound by Warkil Street to the west and the Murray River to the east was reserved for future use, about 15 kilometres west of Cobram East.Up until this time, the area of Cobram was part of the Echuca Shire, Cobram station was included when Yarrawonga Shire was created on 15 May 1878. It would later be part of the Tungamah shire in its creation on 17 February 1893. On 12 August 1879 the first school, 2166 Cobram, opened, later renamed Cobram East. In 1886, the government produced the town plan for Cobram, as section 110. 1888 brought about the establishment of the township proper, with the opening of the primary school, Cobram 2881, in April, the opening of the Cobram Post Office near the court house on 1 May, and the coming of the railway on 1 October, which had been heavily publicised by the Cobram Courier, the town's newspaper, first issued 12 September of that year. It was also in 1888 that the first policeman was appointed, the first doctor arrived and Cobram Football Club played its first match along with the building of Cobram's first pub, the Royal Victoria Hotel. A river punt began operating between Cobram and the New South Wales banks the following year.The Cobram Post Office was moved to its present site on 23 February 1904, the first government building in town and the first built in Australia with the authority of the Commonwealth government.Cobram township was finally proclaimed by Sir John Fuller, Governor of Victoria, on 2 December 1912. Two years later, electricity for the town was being produced by a local coal-fired power plant.St. Joseph's Catholic primary school was opened in 1922 and in 1925, the Cobram Golf Club opened a 9-hole course near the Murray Valley Highway, transferring three years later to the current location in Barooga.Cobram adopted yet another town plan in 1949, the first rural Victorian town to do so, with high anticipation of population growth and the proliferation of industry. In 1950, the first of such expansions was realised, with the creation of the Murray Valley Co-operative Dairy Producers and Trading Company, the predecessor of Murray Goulburn Co-operative.The town split from Tungamah Shire and Cobram Shire was formed on 1 April 1953, after increasing agitation from the townspeople with the operations of the Tungamah Shire. The first Shire President was Mr Norm Jordan, a long-standing Cobram businessman. Almost ten years later, in 1962, the first high school opened in the town. In May 1972, the first connections to town sewerage were made, totaling 1,000 by 1976.Through the 1980s and 1990s, Cobram was awarded many town awards, including Tidiest Town in Victoria in 1991 and 1993. In 1993, Cobram Shire was amalgamated with Yarrawonga, Numurkah, Nathalia and Tungamah Shires to form the Moira Shire. # Weather Cobram has a Mediterranean climate with hot and dry summers and cool, wet winters. The area has 300 days of sunshine a year. The average wettest day Cobram would have is around 30 millimetres. # Things to do A major landmark is the Cobram Bridge, a De Burgh truss lift bridge, which was built across the Murray in 1902. The Cobram Bridge is the only bridge on the Murray River whose construction was completely funded by the Victorian government. Tenders were awarded in November 1900 and the bridge was opened officially on 3 December 1902, two months after being open to traffic.Other landmarks include the settlers' log cabin, war memorial and civic centre. Also of note is the Cobram courthouse, built in 1912, which continues to be utilised as the Cobram Magistrates' Court. Most of the old brick buildings were of local bricks, made by Samuel Steward. He has a monument on the Cobram to Barooga Road. Cobram Station, built from 1905 to 1907, is a large homestead located east of the town on the Murray Valley Highway. The building comprises 250,000 bricks hand-made on site. It is currently a private residence. Around the region are numerous river beaches, with Thompson's Beach, claimed to be the largest inland beach in Australia located just north of Mookarii Street, before crossing into New South Wales.