Starting this autumn, Luna Palace Cinemas will be transporting viewers into galleries from around the world with these amazing immersive art film experiences. Windsor Cinema will play host to Exhibition on Screen with 5 feature-length films showcasing iconic artists and the pieces that have made art history. See below for our guide to the movies part of Exhibition on Screen, as well as movies about the arts and artists coming soon.

As perhaps one of the most significant moments in history, the death of Jesus Christ has dominated western culture for the past 2000 years. It is story has been immortalised not only in the gospels of the Christian Bible, but is also depicted in some of the greatest artistic creations in Western civilisation. This beautifully crafted film explores the Easter story as depicted in art, from the time of the early Christians to the present day.

Filmed in locations in the US, Europe and Jerusalem, viewers will witness the works of prolific artists, such as Caravaggio, Michelangelo, Da Vinci and El Greco, as well as contemporary pieces from artists like Mark Wallinger and Sam Taylor-Wood. Watch how different artists have represented the death and resurrection of Christ, and explore the artistic evolution of this story through the ages.

This exclusive screening will take place on Saturday, March 27 and Sunday, March 28 starting at 1.00pm, with a third session on Wednesday, March 31 at 11.00am. Allow director, David Bickerstaff, to whisk you away on a journey around the globe to see some of the greatest works of art from celebrated artist, Vincent van Gogh. Marvel at van Gogh’s iconic Arles Sunflowers, a series of vibrant still life paintings ablaze with the vibrant oranges and yellows that are distictive to the artist’s groundbreaking style. Shot in locations like London, Philidelphia, Tokyo, Munich and Amsterdam, this astonishing film goes beyond the surface to explore the many questions and mysteries that surround these works. Why did van Gogh choose the sunflower as his subject? What was the meaning behind each of the five paintings in the series? What secrets did scientists discover when they analysed the work in detail?

See the blooms of the Arles Sunflower collection as they have never been seen before with this exclusive virtual exhibition, telling the unique story of each piece, spanning one of the most famous and turbulent periods in art history. Due to the delcate nature of the paintings, they will never again be shown side-by-side, so be sure to catch their brilliance in detail through this film.

Acclaimed inventor and artist, Leonardo da Vinci, is an icon of western culture, frequently featuring in modern telvision, film and literature. Examine all of his known artworks, from paintings to sketches, in this explorative feature film, showcasing unparralleled masterpieces like The Mona Lisa, The Last Supper and Madonna Litta in Ultra HD quality.

Catch a glimpse of da Vinci’s genius through his inventions, military foresight and political analysis, through the lense of his artistic creations. Released on the 500th anniversary of da Vinci’s death, this is a flim that honors and unveils the polymath in new ways.

Cézanne – Portraits of a Life

Returning to the Windsor Cinema is Exhibitions on Screen’s most successful film, ever. Offering a unique and fascinating exploration of the life and times of French artist, Paul Cézanne, see the first-ever exhibition devoted to the portraits of Cézanne. Narrated by Emmy Award-winning actor, Brian Cox, delve into the life of the artist that inspired Matisse and Picasso, who dubbed Cézanne “the father of us all.”

Filmed on location at the National Portrait Gallery London, National Gallery of Art Washington,and Musée d’Orsay Paris, this film features interviews with curators and experts, and correspondence from the artist himself, taking us beyond Cézanne’s portraits to the places he lived and worked and sheds a light on an artist who is perhaps the least known of all the impressionists – until now.

Lucian Freud: A Self Portrait

For the first time in history the Royal Academy of Arts in London, in collaboration with the Museum of Fine Arts in Boston, is bringing together Lucian Freud’s self-portraits. The exhibition, directed by David Bickerstaff, will display more than 50 paintings, prints and drawings in which this modern master of British art turned his unflinching eye firmly on himself.

One of the most celebrated painters of our time, Lucian Freud is also one of the very few 20th-century artists who portrayed themselves with such consistency. Spanning nearly seven decades his self-portraits give a fascinating insight into both his psyche and his development as a painter, from his earliest portrait painted in 1939 to the final one executed 64 years later. When seen together, his portraits represent an engrossing study into the dynamic of ageing and the process of self-representation.

The Painter and the Thief

Filmed over three years, this documentary follows a remarkable story of human connection. When two paintings are stolen from Oslo-based artist Barbora Kysilkova, the police catch the thieves within a few days. But the paintings are never found. Barbora attends the court case hoping to find clues for where they can be but finds herself compelled to walk over to one of the criminals to ask another question: “I wonder if I could paint you?” Thief Karl-Bertil answers without hesitation: “That would be possible.”

Thus begins the relationship between an artist and her unlikely muse—which soon evolves into an even more unlikely friendship.

This riveting drama set in the aftermath of World War II explores the true story of a soldier investigating Dutch artist and suspected Nazi conspirer, Han van Meegeren. As evidence against Han piles up, the soldier, played by Joseph Piller, becomes increasingly convinced of the artist’s innocence and finds himself fighting to save the mysterious artist from those that want to make him pay.

Keen to see more on screen? Check out our guide to Outdoor Movies 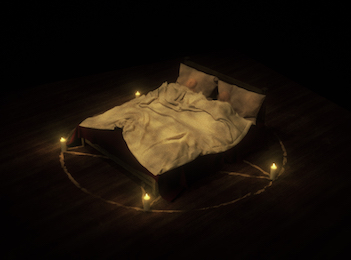 DARKFIELD, the team behind the eery shipping container experiences, COMA, FLIGHT and SEANCE, has announced a lockdown-only online broadcast of the spooky, fist-clenching Darkfield Radio shows. Similar to the in-person shows seen at Fringe World, the at-home shows will also be in the complete darkness with participants wearing headphones to experience the three 20-minute Darkfield […]