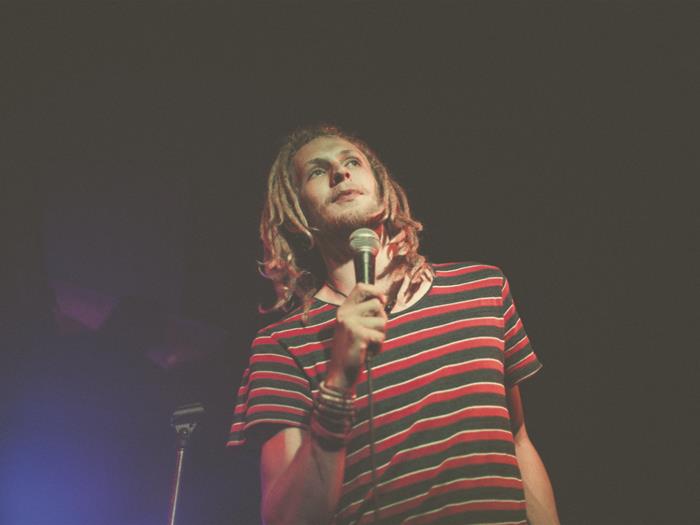 If Rory Lowe ever won a Grammy, he would definitely thank the Nokia of pens, Bic, for never running out of ink while writing the material for his show, ‘Instagrams 2 Grammys’. He’d also thank the guy who invented the microphone for allowing his mixed Aussie-UK-Hippy accent make people laugh on a higher volume.

Rory will say goodbye to Insta-fame (well, sort of) and hello to potentially winning a Grammy one day in his Fringe show this season. The comedian will explore where he is in his career, who he is as a person, and what he wants out of life, with a joke or two on the side.

“It’s an internal analysis of what I thought I believed in and what I thought I valued, but no longer do,” he says. “It’s a painfully reflective observation of past lusts and lost loves who I defined myself by, but now have let go so I can achieve my goals and self love.” In other words, says Rory, “I’ll be talking about nudity a lot.” Typs.

Being his second round at Fringe World, that Grammy is in sight, especially after the successful year he’s had. Meeting famous comedians, finally getting on that Insta-fame bandwagon, a national tour and the girth of his, um, dreadlocks, it’s been unreal for the 23-year-old.

“I’ve had some really big gigs this year,” says Rory. “I’ve met some amazing people who've humbled and pushed me in ways I didn’t think were possible.”

To start off with, he fell asleep at the beach and woke up as a meme, thanks to Bondi’s best internet website for sore eyes, Brown Cardigan. A photo of Rory napping with his dreadies shielding his eyes from the harsh sun (you know, because of that hole in the ozone layer and all) went viral and scored him 2,435 likes – or dislikes.

He also did one too many shots of Jagermeister with British comics Stephen K. Amos and Paul Foote while at Connections Nightclub. Standard. Not to mention Rory got all fan-girl crazy over Aussie comic Will Anderson and probably forced him into things that’s illegal in exchange for comic-to-comic advice.

And did you hear about him meeting Scoop Dogg? Of course you did, because he tells everyone. Still, #jealousmuch.

That’s already a lot of material to fit in one hour of #unfiltered lols. Being dubbed “genuinely funny” by the The Adelaide Advertiser, and Tame Impala preaching he’s “even funnier than he is insane”, we’re pretty sure his show will be anything but ordinary.