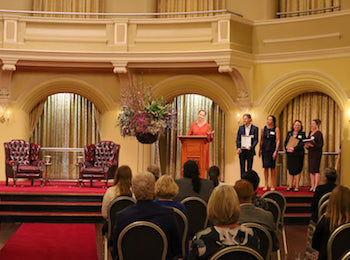 A new Indigenous mental health institute has launched in an effort to combat the devastatingly high rates of suicide and reports of poor mental health amongst many Indigenous communities in Australia.

The Westerman Jilya Institute for Indigenous Mental Health provides a culturally sensitive psychology course to students across the country, lead by mentor Dr Tracy Westerman, one of very few Indigenous psychologists in WA. Passionate about improving the wellbeing of Aboriginal people – and particularly children – Dr Westerman launched the Dr Tracy Westerman Indigenous Psychology Program scholarship for Indigenous students studying psychology in 2019. Due to the support of scholarship donors (including Dr Westerman herself), the program has expanded to support 13 recipients from across the country, a significant increase in number and scope from last year’s five winners from WA. Dr Westerman launched The Westerman Jilya Institute on World Suicide Prevention Day, September 10, alongside the Governor of Western Australia, The Honourable Kim Beazley AC, as well as 2019’s scholarship recipients as guest speakers. “Jilya” means “my child” in the Nyamal language, and the institute is designed with the aim to provide a world in which the most vulnerable Indigenous children can have, at the very least, an equal opportunity to thrive.

Dr Westerman’s main motivation for establishing the institute is to create “an army of Indigenous psychologists” to provide culturally appropriate mental health services to the community.

“Across Australia, Indigenous suicides occur at double the rate of non-Indigenous suicides, and, alarmingly, 40 per cent of child deaths in Indigenous communities are by suicide. Through this program, we are supporting Aboriginal students with rural and remote connections to become psychologists, skilled in Indigenous-specific mental health, suicide prevention and intervention programs.” The scholarships were decided following an extremely competitive assessment process fielding 37 applications of the highest calibre. The number of applicants demonstrates the need for this program and the need for the personal mentoring and support that will be provided by the Institute and Dr Westerman. This year, among the 13 scholarship recipients are 7 male students, which is significant as they are often represent a minority in psychological studies. Further details of each recipient and their stories can be found here.

“These students represent the future of our communities and it is a privilege to be able to support their dreams to improve the mental health and wellbeing of Indigenous people,” Dr Westerman said.

Dr Westerman is herself a Curtin graduate and is the Managing Director of Indigenous Psychological Services. She is also a proud Nyamal woman from the Pilbara region, having grown up in Tom Price. She was Western Australia’s Australian of the Year in 2018 and is the recent winner of the WA 2020 Telstra Small Business Award.

More details on the institute, and how to support their efforts fighting mental illness in Indigenous people and communities can be found here.

If you or anyone you know needs help:

Enjoy a movie under the stars this summer at Telethon Community Cinemas, Joondalup. Doors open at 6:30pm and screening commences at 7:45pm. Bring a picnic or purchase food & drink at the venue. See a list of films on show + trailers below. Film List: December  Dec 1 – The Last Duel Dec 2 – […]

Checkout our guide to over 30 beachside cafes in Perth

Perth is home to more than 30 beachside cafes. We’ve profiled 5 of Perth’s most noteworthy coastal cafes for your next beach-brunch venture, plus check out our list below of other beachside cafes to try. The Shorehouse, Swanbourne Tucked into the dunes at the end of Marine Parade sits Perth’s beachside dining icon, The Shorehouse. […]