24 Sep, 2014
Web
The unyielding natural environment led to a brutalist design for this Alice Springs home, which was inspired by the sky, the desert around it… and a hat.

Mparntwe (Alice Springs) is mystical and mysterious, a place steeped in ancient Dreamtime tales. It’s also one of the most demanding natural environments on earth, where the ridges of the West MacDonnell Ranges and the rough terraces create textured terra exposed to extreme temperatures that swing between 45°C and -6°C.

For all its harshness, however, it’s a land that captivates the couple that owns the Desert House, who wanted to make the most of living there. 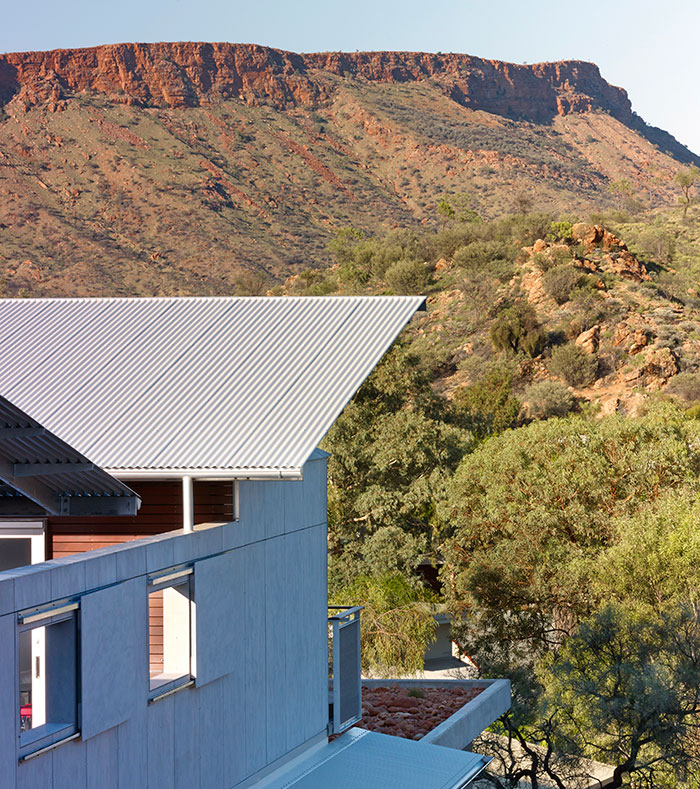 “The clients love the desert, they love the vast views, they love the warmth,” says architect Ashley Dunn from Dunn & Hillam. “They have dogs, they ride bikes, they do not drive, they are very active and intend staying in Alice Springs for the rest of their lives.”

The bewitching landscape has a profound effect on anyone who visits, according to Ashley, who explains that the traditional owners of Mparntwe are the Arrernte people. “They say that the landscape was shaped by caterpillars, wild dogs, travelling boys, two sisters, euros and other ancestral beings,” he says.

It seems the region is also inspiring, with the local people being the initial muse for the home’s design. “The first thing I noticed about the locals when I visited Alice Springs for the first time over 10 years ago was that they all wear really big hats,” says Ashley. “It seems obvious, but this was the starting point for the design.”

Dunn & Hillam aimed to emulate a wide-brimmed hat to protect the house, so that the occupants could feel at home on the range, so to speak. “The house could be described as a Big Hat (fly roof) over an Esky (R6 insulated walls, floors and ceilings),” says Ashley. “Internally the house is clean, white and dust-free, while externally it is a shield.” 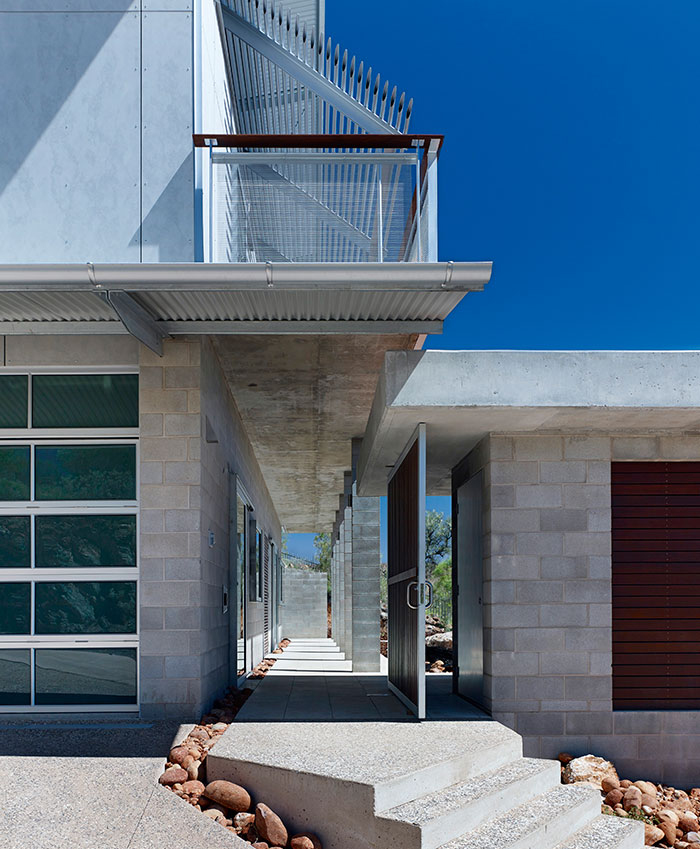 On coming over the ridge and then approaching the house, you’ll see first straight over the top of it to the MacDonnell Ranges beyond. “The roof, U-shaped and faceted inwards, is in full view.

You can get a glimpse into the inner courtyard, and from certain angles through into the kitchen and out the other side,” says Ashley.

Two main challenges of the site were that the view to the MacDonnell Ranges was due west, requiring careful orientation of the home, and that the site has a level change of more than 10m from front to back.

A mighty material palette takes an indirect cue from the early work of the British brutalists such as the Smithsons – it is robust, practical, and will age and weather well. “It is not concerned with being pretty or showing off or using ‘special’ materials,” says Ashley.

The heavily insulated house is designed around the premise of layered protective skins. It has a tough outer skin of exterior garden walls to shield the glazed inner courtyard, which provides passive evaporative cooling and shade.

On entering the front ‘door’ you access the first skin, where a colonnade provides respite and is foregrounded by natural landscaping and the cool blue relief of
a lap pool. The design by Bloomin Deserts was inspired by the Desert Park in Alice Springs and features native/endemic desert plants and rocks that were excavated from the pool on site.

The second skin is the building’s cladding. On the upper floor, the open-plan living area is separated from the courtyard only by a wall of glass, which is double-glazed and thermally broken. This is the third skin, and the lightest.

The direction the clients sought for inside the house was clean, simple and low-maintenance. Light, bright and polished, the interiors are a direct contrast to the landscape and the raw, exterior materials. “The interiors are designed to highlight the art and the furniture and to allow the views of the landscape beyond to take precedence over any interior detail,” says Ashley. “We thought of them as frames.”

This new take on what a desert home should be is a sophisticated approach with low energy-consumption.

“It opens and shuts, and heats and cools efficiently, it shelters and it expands – and at the same time it remains engaged and in perfect dialogue with its surroundings,” Ashley says.

The clients’ new home allows them to live comfortably in the harsh terrain and, rather than being swallowed whole by the vast sky that bears down on it, the Desert House doesn’t box them in. Instead, it allows them spaces to be and places to go, while conceding that on some of the more challenging days they might not wish to go outside. “The house is a refuge from, and a frame for, the landscape it is part of,” says Ashley. For anything to survive out in this desert, Ashley admits that it must be patient, understanding, economical and tough, yet responsive.

“Our clients wanted a world within their world, yet they wanted to remain connected to the landscape, aware and part of its wildness and beauty at all times,” he says. “They wanted a state-of-the-art desert house, and now they have it.”