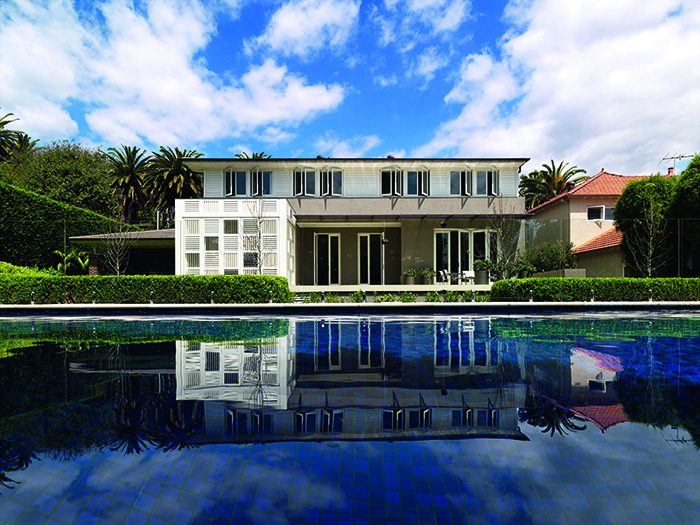 3 Dec, 2015
Web
Building upon this 1920s home in Sydney’s northeast allowed the architects to combine old-world charm with modern functionality.

Knocking down and rebuilding a home is often tempting for architects, because the real challenge lies in reworking a tired existing space. But the original character of this early 20th century home was too good to lose, leaving Luigi Rosselli Architects with no choice but to retain it.

A confused and cumbersome union of 1920s architecture and 1980s additions meant many areas of this home’s structure were disconnected and without purpose.

The discordant styles were jarring to the eye and lacking functionality, and
it was evident the architects had serious work ahead of them to restore the home’s former glory, while welcoming it into the 21st century. 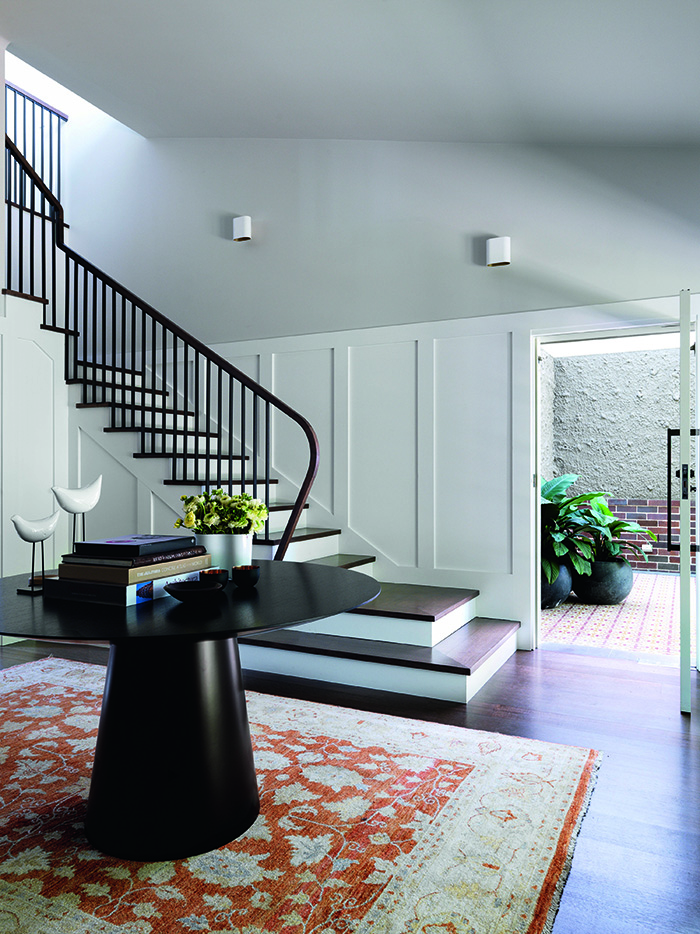 This former living room has been transformed into the entry hall and stairwell, retaining the old wall panels and the fireplace, with a new blackbutt timber stair featuring a steel balustrade. 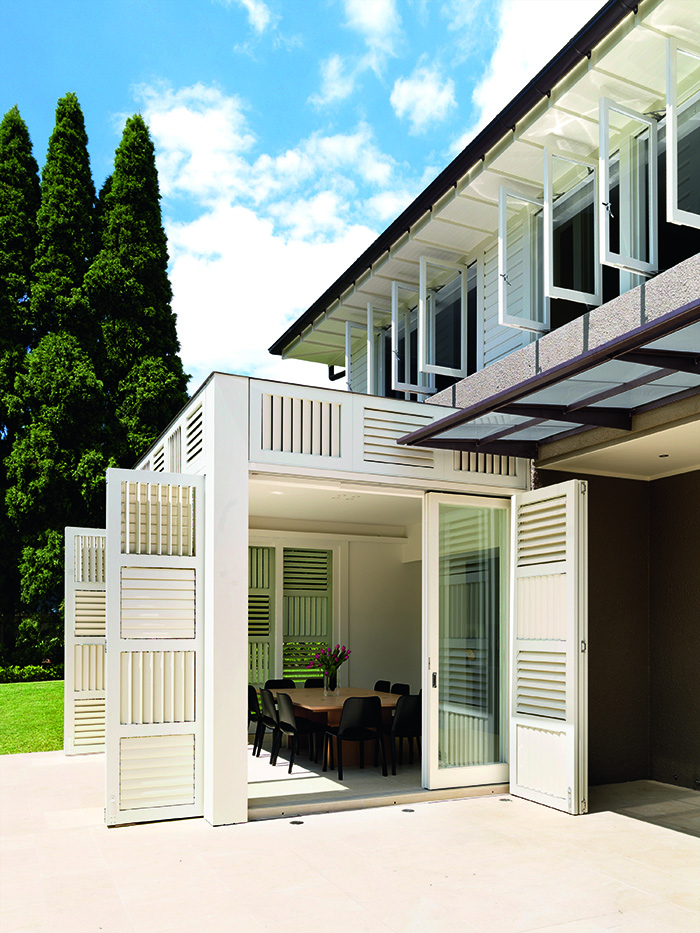 The alterations involved introducing an additional storey, family-room wing and garage, and refreshing the existing spaces.

“We aimed at keeping the finishes and the character of the old house and reinforcing it with sympathetic additions,” says Luigi Rosselli of Luigi Rosselli Architects.

“The alterations and additions needed to provide the family with more space to come together, to be separate from each other on occasion, and ultimately to grow into as the kids got older. The changes also needed to make the house effortless to manage.” 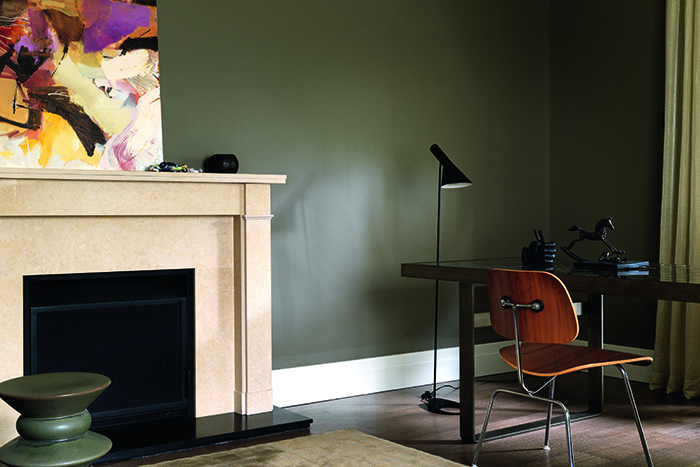 A custom limestone mantelpiece replaced the old timber one in the study. Louise Bell from Interni selected the Zanotta ‘Zeus’ ceramic stool from Space Furniture to complement the coloured walls, along with an Eames moulded plywood dining chair from Living Edge, and Louis Poulsen ‘AJ’ floor light, also from Living Edge.

The original part of the house was redesigned to connect the living spaces to the large garden, and the new upper level with larger bedrooms and bathrooms.

Contemporary licences, such as a shuttered cube enclosing the breakfast room, were introduced to provide balance and modern flair.

This patterned white cube not only makes a visually intriguing statement
for the interior and northern terrace, it can also be opened on three sides, with adjustable horizontal and vertical shutters to temper light and air. 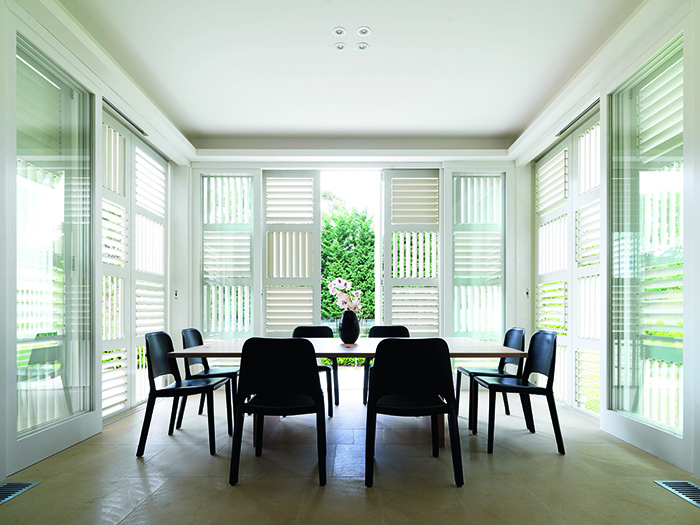 The breakfast room is a versatile space that can be fully opened to the northern terrace. The natural oak Cassina ‘La Barca’ dining table is from Cult,
while the upholstered ‘Kate’ dining chairs are Zanotta. The vase is from Holmegaard, and shutters are designed by Luigi Rosselli. 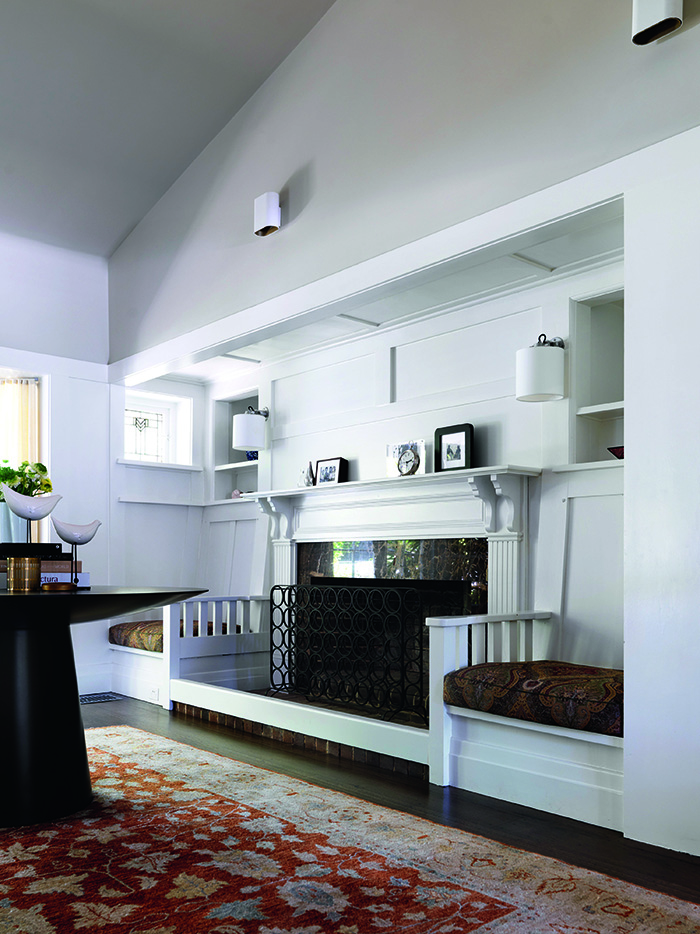 The original inglenook fireplace in the entry hall was restored and is in working order. The Emmemobili UFO table from FY2K is topped with Bitossi Arkitektura bird ornaments from HUB Furniture. The lights on the fireplace and high on the wall are from JSB Lighting.

Overlooking the cube is the relocated modern kitchen that echoes the greenery from outdoors through its bespoke cabinetry. “The green was chosen to reflect the lush and vast garden, applied to timber panelled cupboard doors,” says Luigi.

“The walnut drawers to the island bench were selected to withstand the wear and tear of active children, and the Carrara marble was a natural selection, as it is the oldest kitchen benchtop material.

“With Louise Bell of Interni, we chose natural, ageless materials, such as timber floors (some were original), encaustic tiles, sandstone pavers and simple steel handrails, and externally we continued on the original palette with the rough-cast render, timber windows and shutters.”

Sustainable design prevails through high-performance glazing, solar panels
for electricity, solar heating to the pool, recycled materials, and concealed rainwater tanks that retain up to 10,000 litres of water. 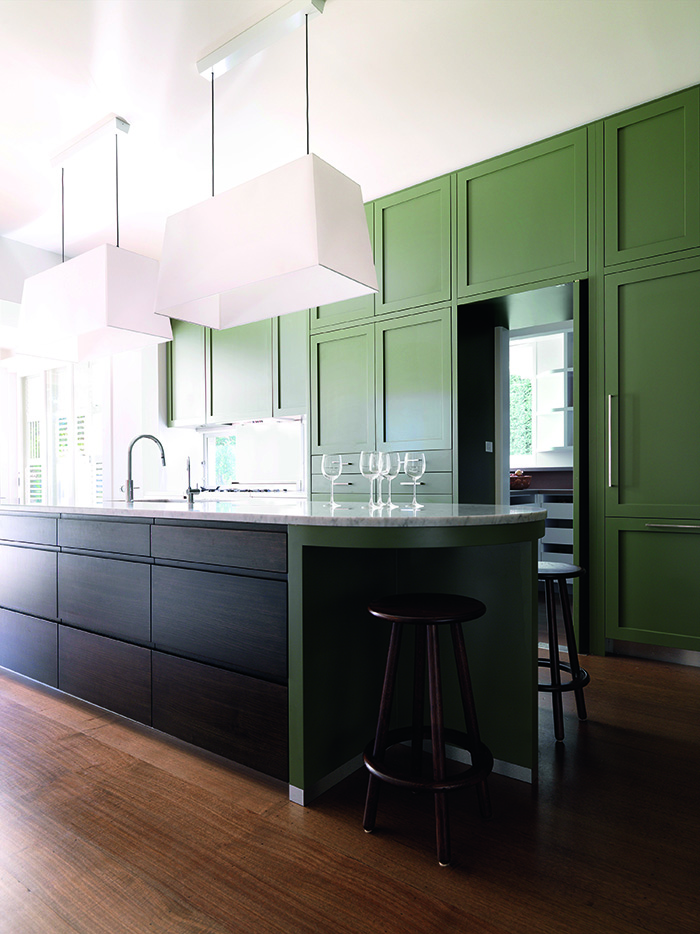 The walk-in pantry door is constructed flush with the other kitchen joinery doors in Resene Panzano G50-020-119 by Kitchen Trend. Honed Carrara marble lines the island benchtop, and dark American oak dresses the drawer fronts. The pendant lights are from Space Furniture, and the stools are Pierre & Charlotte. 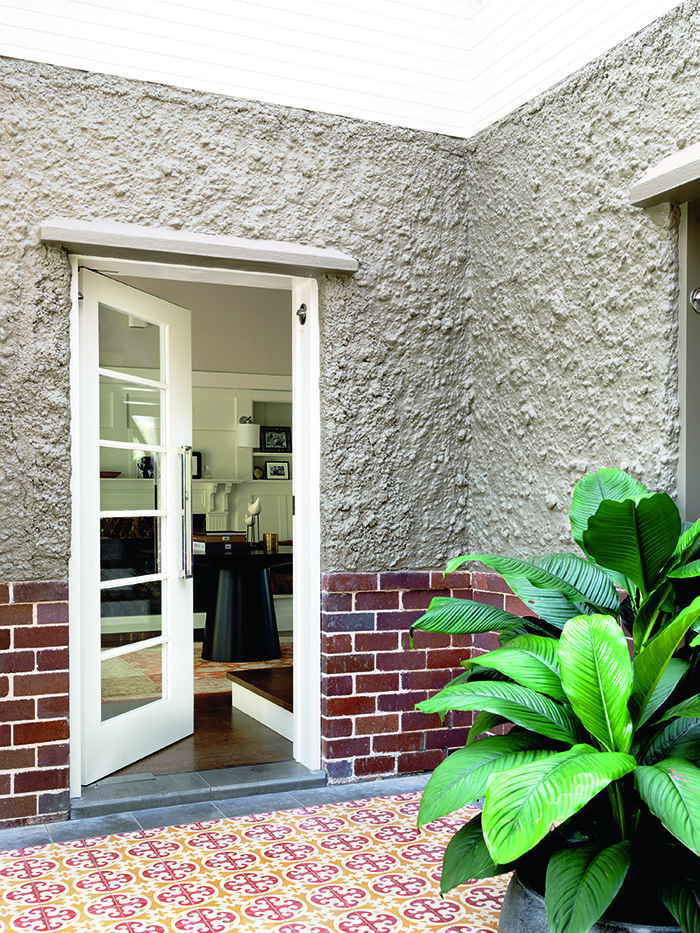 A rich palette of materials features in the entry porch, including encaustic tiles, the original back wall base, rough-cast render, and a glowing translucent glass roof. 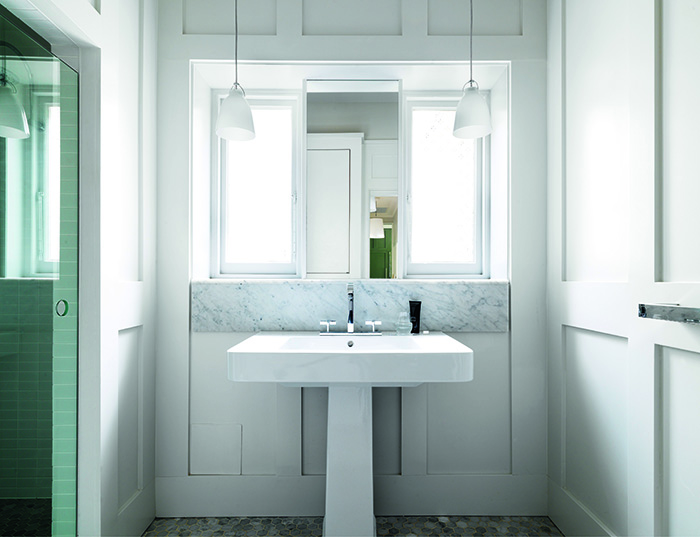 The powder room was the original bathroom, with its traditional tin windows and a mirror medicine cabinet in between – a classic example of the home’s transition from old to new. 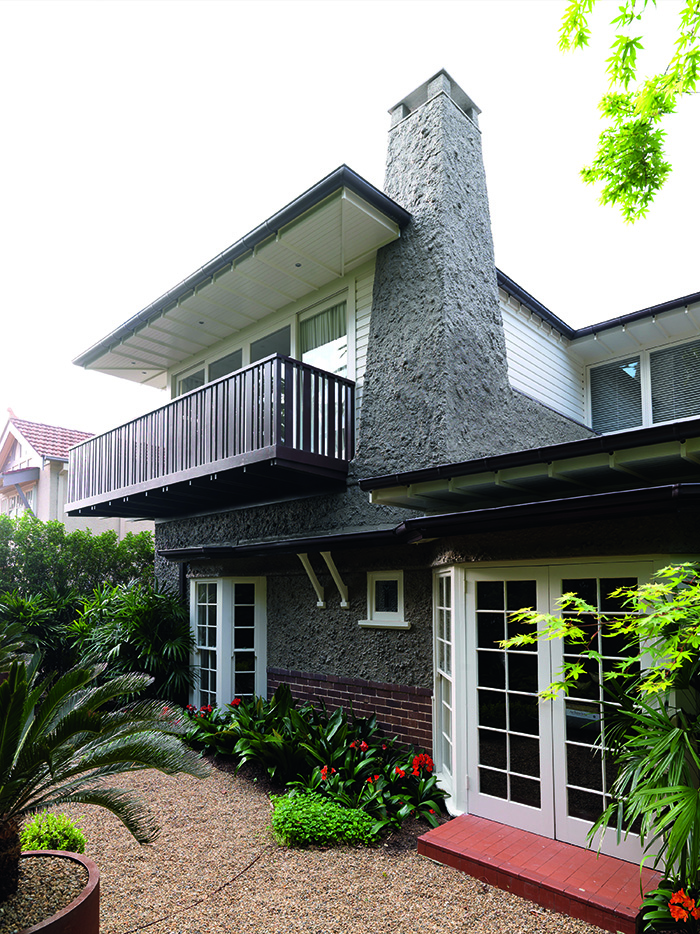 The master suite spills out to a balcony, with large eaves to protect the northern facade from the sun. 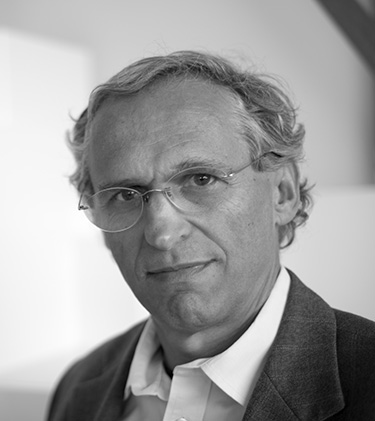 Luigi Rosselli talks about his award-winning design, the benefits of renovating, and his key influences.

What is your favourite element of the home and why?
I feel at home in the entrance hall and the stairwell – it used to be the living room of the old house, with an intricate inglenook fireplace and wall panelling.  Being centrally located, it was the obvious place to locate the new entry and stairs.

What do you think the benefits are of renovating an existing home, as opposed to demolishing it and starting afresh?
You gain the opportunity to renew and reinvigorate good architecture while retaining the historic and emotional connections to the home and the space it exists in. Often houses are not just about the people who live in them, they form part of the character and heritage of the community. Also, reusing rather than replacing what is already there extends the life of the building and reduces its embodied energy.

How has your experience working overseas in Milan, Switzerland and New York influenced your designs?
I believe architecture should be anchored to the place it is located, and so I also
draw influence from the site and its surroundings that the client brings, rather
than transplanting an unsympathetic design from another geographical location. Overseas experiences are a good way of broadening the design and cultural knowledge that an architect should nurture.

What’s next for the practice?
To keep on renewing our designs, searching for new ideas, forms and solutions.