Give Me Some Sugar

11 Apr, 2016
Web
We’re far enough from New Year’s now that we can forget all about those pesky resolutions, and fully embrace Perth’s clean-eating backlash. Frosted cake for brekkie? A cronut ice-cream sandwich? What about a milkshake topped with caramel and bacon? You want it, Perth’s got it. We taste our way around the city to create a food trail to sweet-tooth heaven.

Be warned you’ll have to elbow your way through half of Perth to get to these local legends, But once you sink your teeth into them, all that will be forgotten.

Chu puffs from Chu Bakery
Pretty much everything from this Highgate bakery is divine, but their signature Chu puffs deserve special mention. Swirls of flavoured Chantilly frosting are sandwiched between crisp choux pastries, with a secret explosion of jelly. But is the Matcha Yuzu or the Peanut Butter Jelly the most delicious? The jury is fiercely divided.

Sticky Fingers from Theo & Co
Cheese-less pizzas are a scary prospect, but take a risk: the dessert pizzas from Theo Kalogeracos are pure ecstasy. The Sticky Fingers is made from a sticky date pudding mix, topped with dates and white chocolate chunks, and slathered in caramel sauce and vanilla bean ice-cream. No words. Strawberry with dark chocolate gelato from Gusto Gelato
Once you’ve been indoctrinated into the cult of Gusto Gelato, there’s no turning back. From there on, all ice-cream will pale in comparison to these creamy and insanely flavourful treats. We suggest you taste your way through every offering, but start with this choice flavour, made with silky Valrhona chocolate and hunks of real strawberry.

Caramel sandwich from Whisk Creamery
This Subi ice-creamery is a relative newbie, but has amassed a throng of slavish devotees. Why? It pushes the boundaries of desserts as we know them, defying traditional structures and flavours with creative concepts. This cronut sandwich (croissant/donut, duh) stuffed with salted caramel gelato, and smothered with whipped cream and caramel sauce, is a prime example. Salted caramel doughnuts from Mary Street Bakery
These babies need no introduction. But just in case you’ve been living under a kale-covered rock, imagine pillowy brioche doughnuts bursting with molten salted caramel… Or better yet, taste them yourself. Just be prepared to sprint, they sell fast.

Fun fact the international Freakshake craze (Frankenstein-like milkshakes, with an array of ridiculous adornments) started in little ole Canberra. But Perth wasn’t far behind, and our current offerings are some of the most creative. Here’s where to get ’em. 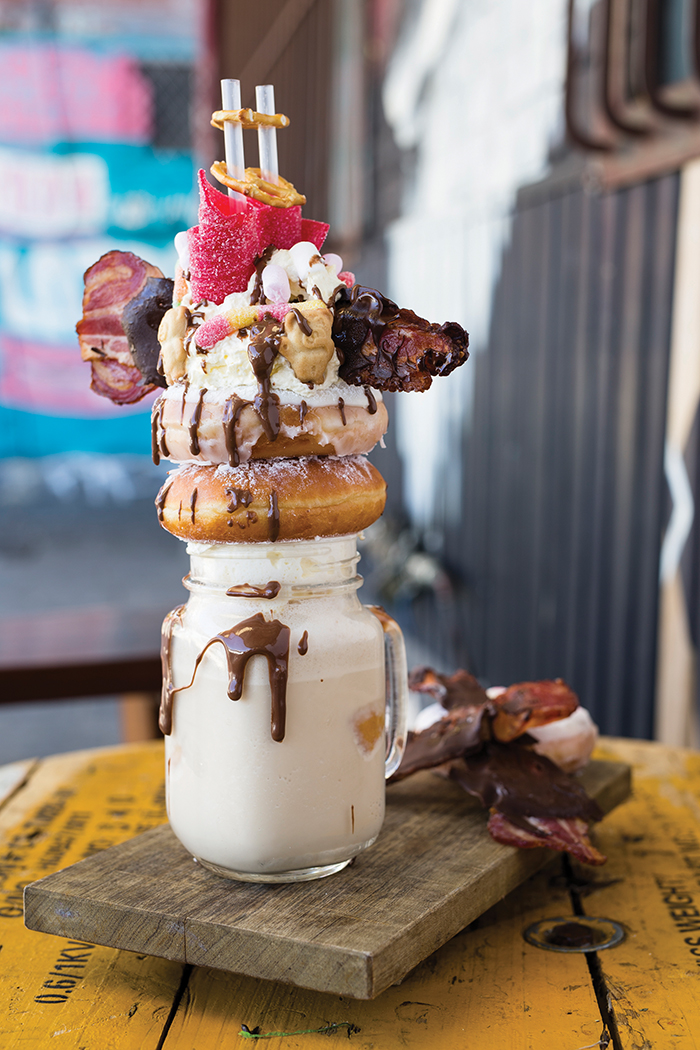 Babooshka
This Northbridge cafe dishes up freakshakes of dizzying heights and calorie content, with ‘garnishes’ – we use that term lightly – such as whole pancakes and Krispy Kremes, Froot Loops, marshmallows, and choc-coated bacon. Sweet Jesus.

Sapore Espresso Bar
This Belmont joint claims to serve wholesome food, but their drinks are a whole different story. Their syrup-drenched shakes, topped with puffs of cream and oozing chocolate bars, are worth every last cavity. The Sweet Remedy Cafe
This new cafe may be small, but it packs a serious punch with its Cupshakes,
a milkshake made from a cupcake of your choice (there are dozens to pick from) blended with fresh milk and cream. 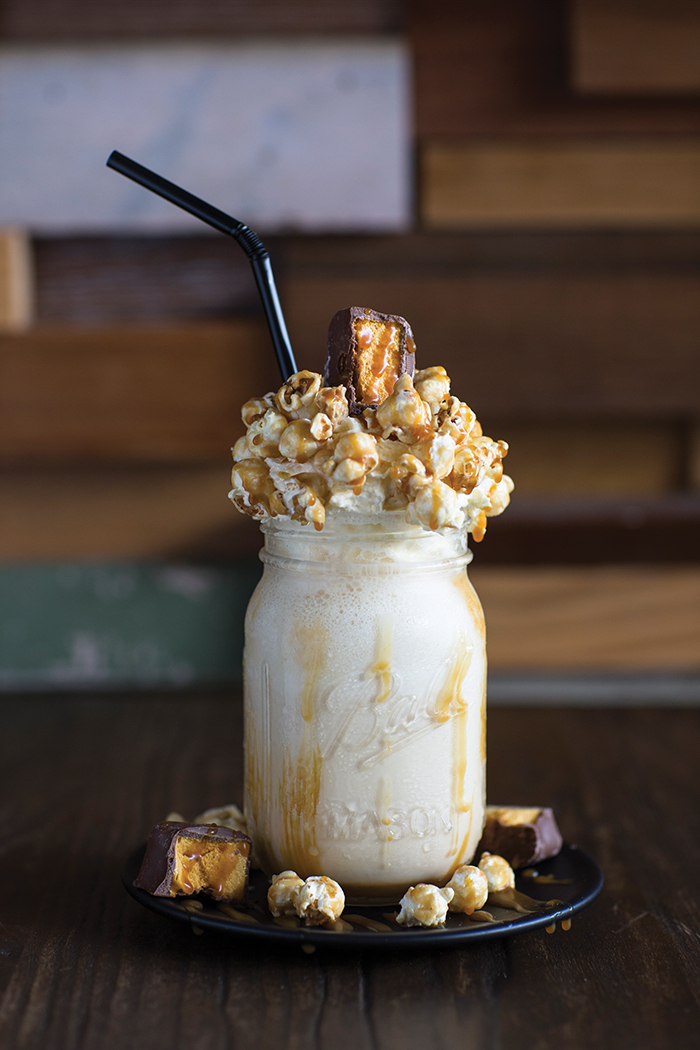 Whisk Creamery
Arguably Perth’s best, Whisk’s freakshakes are made with housemade gelato and milk for a lush consistency and icy temperature. Go for the Caramello salato, studded with choc-dripped honeycomb and caramel-glazed popcorn, or the Choc Mint, made with creme fraiche, natural mint, and chunks of mint meringue.

Vegans – for your environmental and ethical sturdiness, we’d like to give you
some sugar. These cruelty-free offerings really hit the sweet spot. Soy ice-cream from The Junction
This award-winning ice-creamery is just the ticket on hot days, with its silky range of soy ice-cream in flavours like honey macadamia and chocolate. 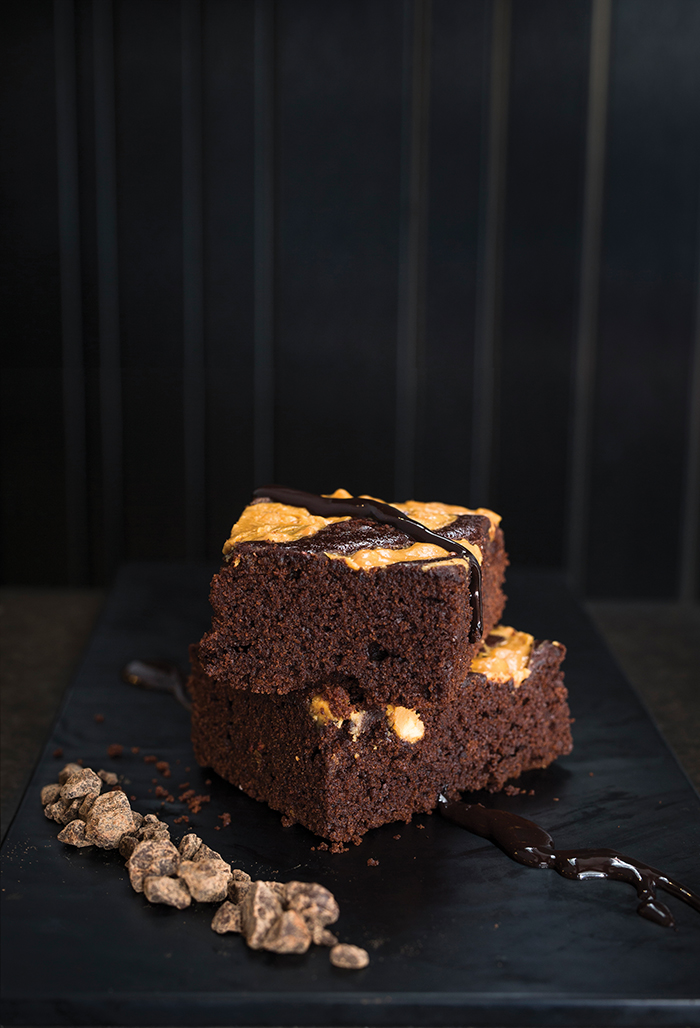 Vegan peanut butter brownie from Louis Baxters
Made by the clever folks from Carina’s Kitchen, these rich brownies are dense and dreamy. You won’t even miss the milk.

‘Cos if you’re going to blow your daily calorie intake in one hit, you might as well get started early… Waffles from Good Things
These poached pear waffles, doused with chai syrup and marscapone, are
a good thing indeed. But the great bit? The gleefully immature choc pop rocks on top, for tongue-crackling fun. Move over, Rice Bubbles.

Red velvet pancakes from Sapore Espresso Bar
As Marie Antoinette once said, “Let them eat cake for breakfast.” While that second part might be a fabrication, we have no doubt decadent Queen M
would have endorsed these cakey pancakes, frosted with cream-cheese ganache, and served with berry compote and a hearty scoop of ice-cream. Brownie-filled pancakes from Aliment
By some sweet sorcery, the folks from Leedy cafe Aliment managed to stuff their pancakes with molten brownies. They then gilded the lily by dousing them with maple syrup and salted caramel ice-cream. Sinfully good.

Rum & maple glazed crumpets from The Partisan
Banish all associations with stodgy Englishmen and lumpy porridge. This new breed of crumpet is all smooth indulgence, with buttery lattices glazed with maple syrup and rum. To top it all off, it’s served with a chocolate salad. You read that right. Chocolate. Salad.

Because two vices are better than one. You’ll be high on life – and blood sugar – after sampling these tipples.

Salted caramel thickshake from Jack Rabbit Slims
At this trendy Pulp Fiction-inspired bar, a 50s-style diner serves naughty thickshakes spiked with vodka and Jamesons. Down one with loaded fries before breaking it down to cult DJs in the band room next door.

ANZAC Legend from the Classroom
This ode to the ANZACs tastes just like the biccie, with house-made macadamia orgeat and macadamia brittle. Add MDC Small Batch, orange blossom, fresh lemon, and Southern Cross bitters for the full patriotic package. 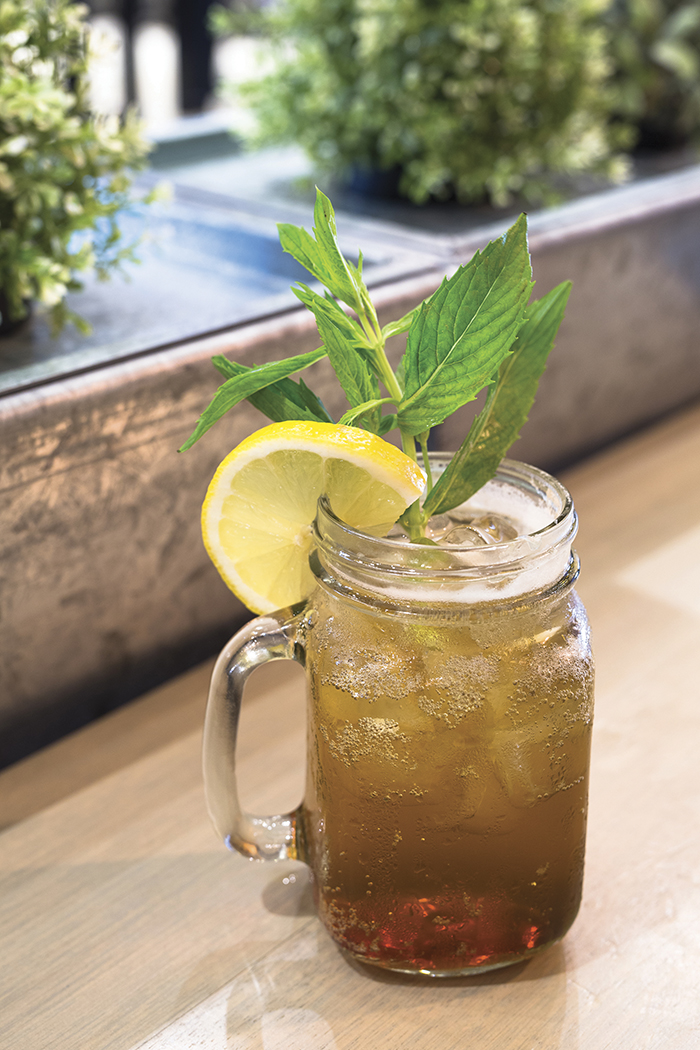 ‘Smarter than the average bear’ from East Village
Head to this NYC-inspired diner for a root beer/Pepsi concoction, splashed with coffee and vanilla liquers, and topped up with draught beer and soda. The sugar/booze/caffeine triple-whammy gives new meaning to the term ‘American Dream’.

Bubblegum Sour from the Laneway Lounge
Just cos this city bar is super swish, doesn’t mean it can’t have fun. Case in point: the gloriously girlish Bubblegum Sour, made with Hubba Bubba-infused Ketel One and bubblegum syrup, beautifully balanced with fresh-pressed lemon juice and egg whites. The pastel drink is even garnished with a stick of Hubba Bubba.

An office worker by day, Cathy Huang moonlights as one of Perth’s favourite food bloggers and bakers, Bake You Smile (@bakeyousmile). We chat to her about working at a corporate job by day, where she gets her sweet fix, and that time she made a cake from chicken wings. Your cakes are like artwork. Are you a secret artist?
Me and art are not friends. I’ve never had an eye for being creative with drawings, paintings, or anything like that. With cakes, I just go with the flow.

You work in a corporate job by day…
Sure do! It keeps the mortgage happy, haha. I find baking very therapeutic and it allows me to be creative, which is a huge contrast from my day-to-day corporate life.

What’s the most outrageous cake you’ve ever made?
The KFC cake I made for the Mister for his birthday. We’re kind of on a sugar ban for our wedding, so he said no cakes this year. Hmm, not sure if KFC is any better!

Fantasy cake?
I am determined to make a cake as tall and large as the giant Toblerone bars.
I might need to invite the whole world to help eat it, though… Perth’s a bit in love with sugar right now, with glorious concoctions popping up all over the place.

What’s that about?
I think that with the rise of social media, everyone wants to eat prettier ‘Insta-worthy’ food. Plus, everyone has a birthday, and I do believe a little self-indulgence at least once a year is okay (and okay, on everyone else’s birthday too!)

If you had to design a cake for Perth what would it consist of?
I would decorate a naked cake featuring the wildflowers of Perth.