19 Dec, 2013
Web
No matter how well you organise your special occasion, there are some things you can never plan for…

“We did a wedding last year in Lake Clifton on a large block of land, big enough to need a tractor. As a gimmick, the groom had the limo drop him and the bride off at the start of the long gravel driveway. He was going to then cart the bride up to the house for the reception in the front bucket of the loader. The groom forgot to make sure there was enough fuel in the tractor to make it up the driveway. They got halfway, in the dark, when it conked out, forcing them to walk the rest of the way!” Brad Wallis, Wallis Catering

“A number of recently trimmed branches were hanged throughout a ballroom ceiling, as part of the theme for the evening. It became a problem when small bugs started falling from the branches and onto guests’ plates!” Anonymous

“We were at our office Christmas party a few years ago and the music was being generated by the executive assistant’s iPod. Suddenly the music stopped and was replaced by the EA’s self recordings of her singing Justin Bieber in the shower at the top of her lungs!” Anonymous

“We had a client once that chose a band from a less than reputable referral source. They didn’t hear them play before the event and so were totally shocked when, on the night, the lead band member started to chat away, telling unimpressive jokes, play games and bring members of the audience up onto the stage. It was uncomfortable, awkward and inappropriate!” Vanessa Fordham, Villa Kula

If you’re doing a seating plan for an event like a wedding, make sure you know who you are seating next to each other. There’s nothing worse that sitting at a table next to the guy you dumped for someone else  a few years ago. Awkward!” Anonymous

“A bride developed a migraine at her wedding dinner, held in an elaborate marquee with no expense spared. She disappears, hanging her dress up while the dinner goes ahead. The groom moves his best man next to him on the bridal table and even does the waltz with the bride’s wedding dress. She returns around midnight in her dressing gown feeling much better, but devastated she missed the whole thing. To cheer her up, the parents decide to pay for the entire event to be repeated the next day… same menu, dress, music. The lot!” Michael Towey, All Seasons Catering

“An AV company fired streamer/confetti cannons from the stage, into the crowded room of tables during a dinner in a hotel ballroom. The only problem was there were lit candelabra centrepieces on each table, which all started to catch fire!” Anonymous

“We arranged a special visit  from a ‘man in uniform’ for a friend’s big 40th celebration. A few girls got stuck into the punch early and became quite noisy. When the police showed up with a noise complaint, one of these girls mistook the ‘man in uniform’ for the special visitor, sat him on a chair  and proceeded to give him a dance of her own. She soon realised he was a real police officer, not the entertainment.”  Anonymous 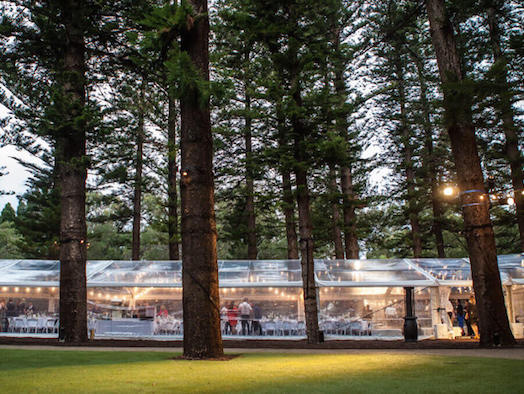 Perth’s most unique venues: from marquees in the forest to floating rafts

Whether it’s a birthday party, intimate engagement party or even a corporate event, the first step to throwing a successful event is finding the perfect venue. Even better if you can find an awesome venue your guests have never experienced before.  Here is a selection of unique and quirky venues that tick all the boxes. […]