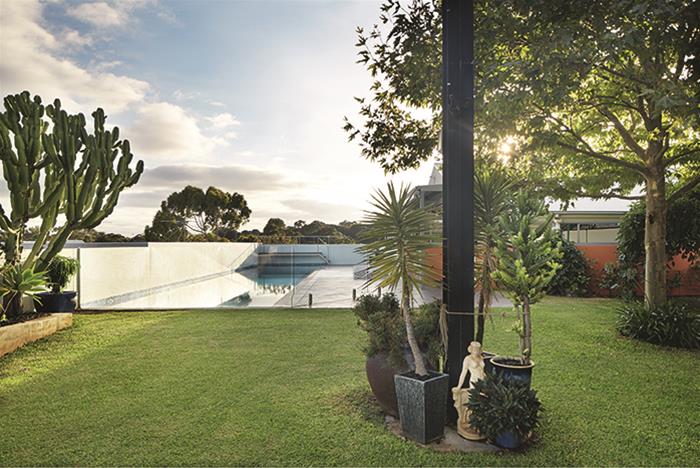 17 Mar, 2015
Web
When ex-Chicago Bulls basketballer Luc Longley lost his home in a fire, the opportunity arose to transform a Fremantle factory unit into a unique home.

Until recently, Luc and hiswife – chef, TV personality and musician, Anna Gare – shared the home with their four grown-up children. But, when the kids moved out, the couple relocated to Denmark, closing the door of a home on which they’d imprinted their individuality.

The couple bought the former factory unit on a 900sqm land parcel in 2008, after a fire devastated their previous Fremantle home – taking with it a lifetime of memorabilia, including the three-time Olympian’s mementos from playing alongside legends such as Michael Jordan and Scottie Pippen, and souvenirs of Anna’s time with successful eighties band, the Jam Tarts.

Both Luc and Anna’s fathers, Richard Longley and Bob Gare, are local architecture stalwarts and share a mutual respect for heritage renewal. While Luc was growing up in a warehouse conversion emblematic of his own father’s design preference, Bob was busy restoring and developing what’s now the landmark precinct of the former St Mary’s Church in North Fremantle, where Anna spent her childhood. 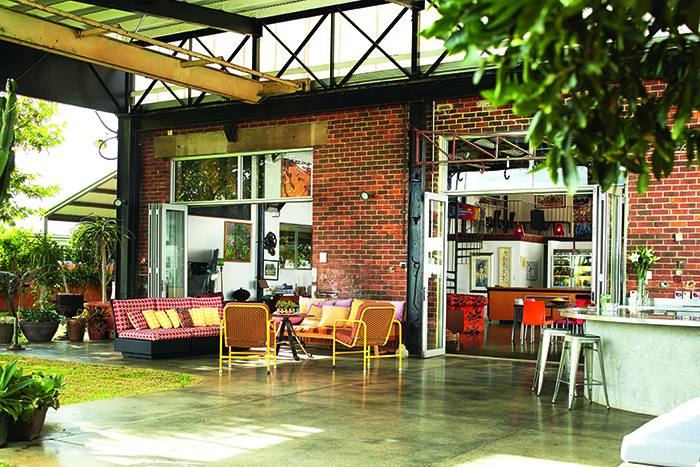 The original triple spec gantry and over-engineered structural steel columns supporting the verandah are tactile reminders of the building's past (photography Robert Frith).

“When we started the renovation, we had four walls, a roof structure and the floor,” says Luc. “Bob was absolutely instrumental in designing and guiding the project, with builder Peter Bell Constructions, to what it represents today.”

In recognition of his efforts, Bob’s architectural drawings of the project have been immortalised in a glass splashback behind the cooktop.

Overall, the combined pedigree culminated in an appreciation of large, open spaces and a passion for giving old things another ‘birthday’ rather than building anew. “We wanted it to be an easy place to live, with a big space for lots of people,” says Luc. “We didn’t see the point of having an open, warehouse-type space and chopping it up into precious spaces.”

As you would expect from the popular, high-achieving couple, entertaining was high on the list of priorities during the conceptual phase. Luc and Anna were married on the site in 2008, and Anna in particular loves a party. The indoor/outdoor flow is realised by robust concrete flooring, while furniture on wheels enables a dance floor to be cleared under a dazzling disco ball. A music corner was regularly used by the talented family, particularly when Bob, an accomplished piano player, paid a visit. 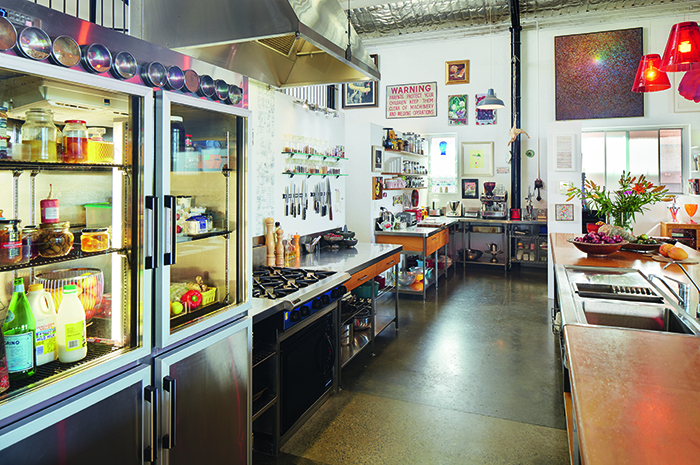 The fit out of the massive kitchen space was strongly influenced by the needs of popular TV chef Anna Gare… although workbench height did prove an issue (photography Robert Frith).

As Anna’s workplace, the kitchen is the hub of the home. The couple’s height difference of almost a metre made the kitchen benches, as well as the height of the showers, toilets and doors, a real challenge.

“I think if you gave Anna a normal residential kit she’d wear it down,” Luc says of the vast kitchen. “In six months there’d be nothing left. It keeps you fit, too – you’ve got to travel in that kitchen!”

Soaring ceilings accommodate door frames with a minimum height of 2.28m, and benefit the art and chic mishmash of furnishings that transform the industrial space into an accidental gallery. Luc says they’re not the type to have a decorating theme, so the style is eclectic by default. 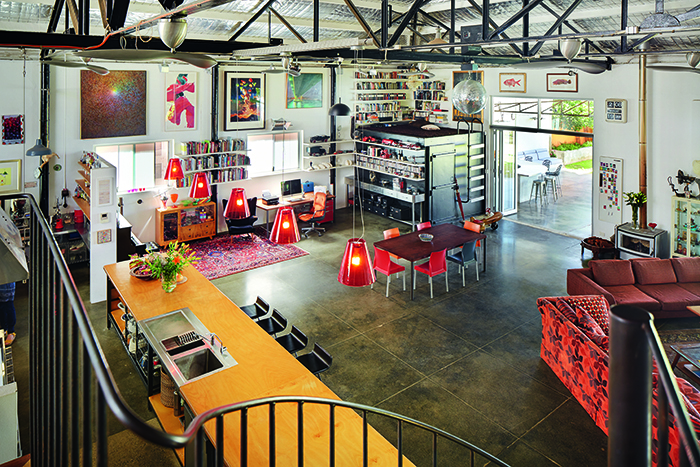 The pair relished the opportunity to invest in favourite local artists such as George Haynes and Jane Martin, who feature prominently throughout the house. At Anna’s insistence, the artwork is displayed against a classic white palette so that colour and texture can be absorbed without being overwhelming. “It’s cost me a few coloured walls over the years but I’ve become a convert,” Luc says.

Luc’s own passions came to the fore in the creation of a “super-sized man cave”, complete with a half-court basketball court, garage and workshop, gymnasium and a swimming pool that was made to spec for two-on-two underwater hockey. “The pool fell within the time of a fad I had when I thought underwater hockey could be something my daughters and I could do together but it never really stuck,” Luc says. 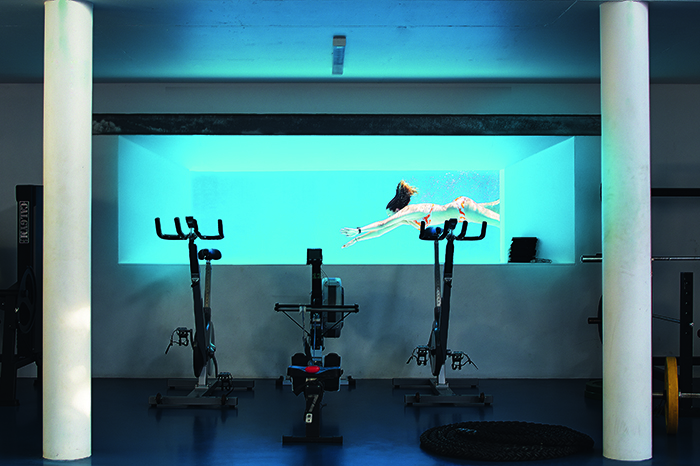 A window allows a view from the gym into the pool, which was
originally designed as a venue for underwater hockey (photography Robert Frith).

Luc is currently assistant coach of the Australian National Basketball team and, despite no longer playing, admits he often found himself standing on the court in the middle of the night shouting at unseen defenders – a legacy of playing at the top of his game for so long.

Of the home they leave behind, Luc is pragmatic. “Anna’s career is pretty transportable, so you could call this a sea change,” he says. “I don’t get attached to property. I’m so used to moving around and I’ve had a lot of change in my life. We found it, designed it, conceived it, executed it, and occupied it, we filled it up with friends and family… what else is there left to do?” The unassuming exterior of the warehouse conceals the unique home within (photography Robert Frith). What attracted you to the factory site?
It was a dream site to renovate, with an elevated northern aspect and double brick walls for thermal efficiency, a view over East Fremantle, and at a comfortable distance from neighbours.

Can we see any of your father’s influence?
Dad’s influence is obvious in terms of scale and the legacy that has seen me wanting to live in the types of spaces I grew up in. He gave me that as a kid, and I’ve followed it through.

Did the renovation pose any challenges?
I designed the kitchen benches at 1.2m, the lowest I could possibly tolerate. We eventually had to lower the rear bench near the oven to 950mm, when Anna started getting tendonitis in her elbows.

Do you have a favourite piece of furniture?
The first piece of furniture we commissioned after the fire was a custom-made oversized fiery orange couch (regular couch sizes are out of the question). It marked the beginning of our next chapter, and is nicknamed the Fire Couch.

Were there sustainability considerations?
The underground tanks mean we can live off rainwater in the winter, and in the summer it feeds the garden and the pool. We essentially future-proofed the garden against water restrictions. The fruit trees planted over the tanks thrive on the condensation from the indirect water supply.