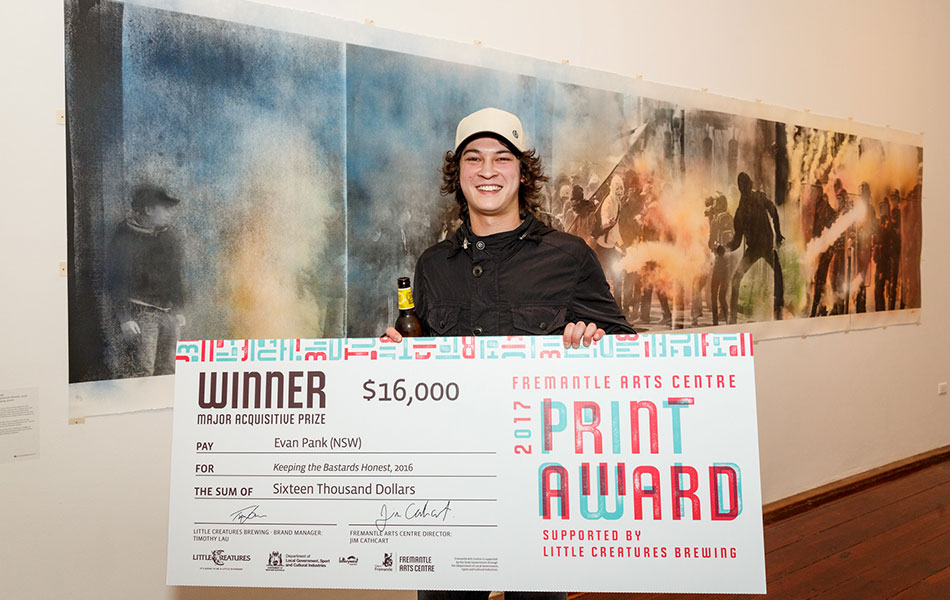 Fremantle Arts Centre was buzzing with local art-lovers on the night of Thursday Sep 21, who gathered to celebrate the opening of the FAC Print Award exhibition and see the prize-winners receive their awards.

People viewed the exhibition while shuffling through various rooms inside the Arts Centre, which was full to the brim with attendees. The large turnout was not only a testament to the number and variety of works on show, but also to the community’s love of and support for the venue itself. That community feel emanated through onlookers, and was clearly present in the welcoming address from the event organisers and from the artworks on display.

The garden, adorned with fairy lights, was home to a pop-up Little Creatures bar, and was soon peppered with large groups enjoying a chilly September evening under the stars. The exhibition, which spanned across three separate spaces within the centre, featured a diverse mix of prints that, as the judges noted, ‘showcase the breadth and complexity of contemporary print practice in Australia’.

Emerging Sydney artist Evan Pank went home with the coveted first prize of $16,000, for his work ‘Keeping the Bastards Honest’, a print combining screen printing with spray painting techniques. The work depicts the emotional chaos of a football riot and makes comment on the way in which our national sport platforms have become a space in which the political elite can be (and perhaps should be?) held to account. The work is to be acquired by the City of Fremantle Art Collection.

For a young artist, taking out the richest and most prestigious printmaking award in Australia is a big moment. Pank said he entered to try to ‘reach a new audience’, and was ‘ecstatic just to be named a finalist’, let alone take home first prize. Judges said the work was chosen as the winner because it demanded viewers to be aware of their own ‘spectatorship’ in society, giving rise to a necessary ‘deep and continual engagement’.

Second prize was awarded to Melbourne artist Valerie Sparks, who takes home $6,000 for her work ‘Prospero’s Island South West’, a dark and moody digital print depicting an angry ocean convulsing onto a rocky beach, night sky and sailing ship – seemingly making reference of the ongoing trauma of Aboriginal peoples and culture since the arrival of European ships.

Notable pieces included Andrew HC McDonald’s ‘Five Pieces of Sand’, a five panel representation of Perth’s five iconic beaches, Susan Marawarr’s ‘Ka-milemarnbun (Weaving Story)’, a design touching on the lives and stories of the women in her West Central Arnhem Land community, and Hannah Farleigh’s ‘People Walking with Phones, People Walking with Pints’, a careful observation of both the banality of everyday moments, and of the way in which those moments give rise to our cultural memory.

The Print Award Exhibition runs at Fremantle Art Centre from Sep 22 to Nov 12. Find out more.

There’s nothing like a good, hands-on art and craft workshop to keep the little ones busy. From painting to sculpture, and even animation, these courses from Perth’s leading arts galleries and art centres will bring out your child’s creative side, as well as taking some of the pressure off keeping them entertained for hours on […]