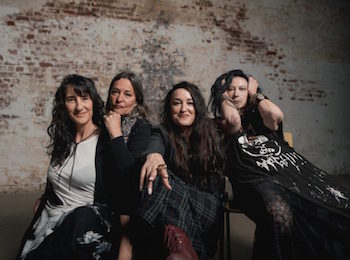 Imaginary Territories: The Fremantle exhibition highlighting the women of surrealism

The women of the surrealist movement are back in the spotlight and Ara Jansen discovers a group exhibition in Fremantle that explores where the real and imaginary meet.

Throwing off the shackles of contemporary culture, surrealism was an art movement that sought to shock and turn convention on its head. Often fuelled by the teachings of Freud, juxtaposition was a common technique and dream imagery promoted, sometimes requiring a melted watch or a bowler hat.

While the men of the surrealist movement – such as Breton, Dali, Magritte, Ernst and de Chirico – are well known, the women who made just as many waves haven’t been quite as celebrated. That is until recently; the 100 year celebrations of the movement have highlighted those female icons, including the likes of Leonor Fini, Meret Oppenheim, Leonora Carrington, Remedios Varo, Lee Miller, Dorothea Tanning and Dora Maar.

Accordingly, “Imaginary Territories” is a group exhibition by Western Australian women who have been influenced by surrealism. The movement emerged from Paris in the 1920s, becoming one of the most crucial influences in the development of contemporary and conceptual art via its way of thinking and seeing the world. Exploring the meeting points between the real and the imagined: ‘Involuntaires’, sculpture by Dr Kelsey Ashe, Shell, plastic, leather, image courtesy of the artist.

“The exhibition is timely in that 100 years on from its first emergence in Europe, surrealism’s influence and legacy is experiencing unprecedented levels of revisionist attention from curators, artists and writers worldwide, particularly for women artists who have found its strategies for artistic enquiry essential to their practice. That inspired us,” says Dr Kelsey Ashe the show’s curator.

The curator wanted to bring together women who had a genuine interest in surrealism and how it had affected or influenced their practice. Like the work of the surrealists, the ensuing pieces form a multi-disciplinary show including film projection, sound, installation, photo-media and visual art.

“The male surrealists had women as their muses. The female surrealists enjoyed the fact that they were women who were strong and independent with something to say,” continues Ashe. “They worked differently to the men and their kind of feminism has an interesting strength and visionary way of looking at the world.

“Now we’re in an unprecedented time in history and as women, artists and members of the community, it’s a chance to say something new and different. That’s kind of where our collective heads were at in making the work for this exhibition. In surrealist tradition, it explores the meeting points of the real and the imagined and the threshold space where the sacred, hidden and uncanny, meets with the rational, mundane and earthly.”

Made possible by funding from the Department of Local Government, Sport and Cultural Industries, Ashe says the work really is a wonderful response to what the artists have been going through in a world in crisis.

The pieces throw up varying expressions on the theme, from exploring inner thoughts and emotions to exposing the yin as an incredible source of strength without sacrificing softness. The latter, Ashe says is much needed at the moment.

“I hope people come away from this seeing that as a valid path; fishing for strength in the softness and being able to impart that to the next generation of women.”

Although known primarily for her paintings, for this show Jo Darbyshire chose to create one large mixed media piece called PELT. Measuring 6 by 1.8 metres, from a distance the oval-shaped piece looks like a painting but on moving closer is revealed to be comprised of thousands of found feathers, almost all of them from Western Australia.

Darbyshire had collected them after putting a call out through social media networks. As surrealist art often uses found and everyday objects in assemblage, she decided they would be perfect for her piece. When you get up close, expect to see feathers from owls, magpies, crows, lorikeets, seabirds, ducks, bush turkeys and even a peacock.

“The way I responded to Kelsey’s thematic idea was about breaking and overcoming earth-bound barriers and the feathers were perfect to express that,” says Darbyshire.

“I liked playing with the visual illusion of it, looking like a painting and when you get close you realise it’s not and it might even be moving a little bit. The idea of freedom is something we must fight for and the fact that it was made during COVID added another element. At the moment, birds are about the only ones flying freely through borders.”

As she hand-fixed the feathers to the six custom-made panels which make up the piece, the artist had the opportunity to appreciate each feather.

“I noticed how each one is beautiful in its own way. I love that even though they are fixed down, they are still flexible. Plus working with organic objects has a certain tangible presence of the wild and untamed.”