6 Oct, 2014
Web
Pilbara street art is going as high-vis as a vest, courtesy of a new project by FORM.

It’s a different land, the Pilbara, miles of dusty red dirt meeting an endless blue sky. Out in the middle of nowhere, the remnants of an airport lie abandoned in the sun, in a sea of spinifex and metal barrels. An eyesore to some, the shed and its collapsed roof and rusty doorframes represent a golden opportunity for Paris graffiti and street artist Remed.

Across its corrugated face he has created a mural of bright geometric shapes, a boat floating on a red sea. He joins international artists Ever, ROA, Pixel Pancho, 2501, Alexis Diaz, and The Yok and Sheryo, to produce large-scale artworks across the Pilbara, an area better known for mining than art. 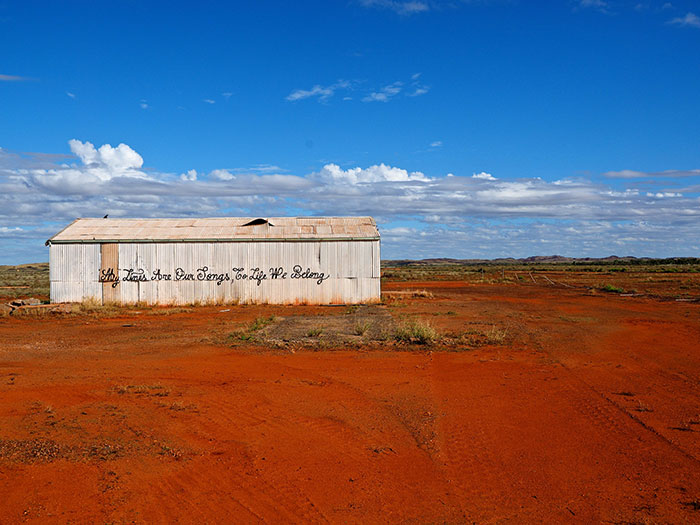 In what is set to be a three-year (or more )program by non-profit arts and culture organisation FORM, PUBLIC: Art in the Pilbara aims to enliven under-used, derelict spaces and make art readily accessible to all.

“We have been bringing international talent to the Pilbara for several years and the benefits are two-way,” says FORM executive director Lynda Dorrington. “It enhances the reputation of the Pilbara overseas while lifting the sights of those who call the Pilbara home.”

Lynda believes exposing the Pilbara to ideas beyond its own backyard brings greater tolerance, curiosity and a sense of inclusion, and FORM curator Sharmila Wood, who accompanied the artists to the Pilbara, agrees. “PUBLIC was a reminder of how art can transform, and, in a culture of mining which privileges the practical over the aesthetic, is a way to demonstrate how beauty and imagination can revitalise forgotten spaces.”

That revitalisation is clear. What was once considered a “fly-over, or a fly-in, fly-out zone”, Sharmila explains, is now a mecca for artists and art lovers alike. “The Pilbara is already a magnet for artists,” she says. “They are enticed by the majesty of the landscape, the people, and the mysticism of the place – every artist I’ve worked with wants to return to the Pilbara, and the international artists who travelled as part of PUBLIC were blown away by both the tangible and intangible qualities of the Pilbara.” Lynda says the artists were given the chance to travel from Roebourne to Millstream, where they camped, and to Karijini before settling in Port Hedland for a few days. “The internationals loved the landscape and the endless horizons but the big attraction was the opportunity to meet Aboriginal people and to see the land through their eyes.”

That opportunity was embraced by Remed, who drew distinct comparisons  between  his  own  practice  and  that  of  Indigenous  artists. “They use simplicity and geometry to express complexity,” he says. “For example, a circle can be a waterhole, it can be the sun; it can be everything.” Art by The Yok  and Sheryo   (photography Bewle Shaylor).

The artist says he was conscious in Perth of a sense of disconnection between people, art and the land. It took a visit to the Pilbara to get in touch with the earth and sky. “We visited the place where the creators arrived on the mountain of clay, and the hole from which the serpent emerged. I see guri guri, the rising star, everyday; wilara, the moon, just after yurndu − the sun − goes down.”

Remed and the other artists are part of an online community, promoting awareness of Perth’s art scene, helping bridge the gap between culture, social ranks and the preconceptions of a westernised society.

“Bringing artists to work in the public realm expands the audience for art beyond the niche elite,” Sharmila says. “I love how street artists from Europe and South America connect with, imbibe and admire cultures so far from their own. They carry ideas and values of Indigenous culture home, to perhaps share alternative, divergent ways of being in the modern system in which they live, and maybe they’ll return to learn more.”