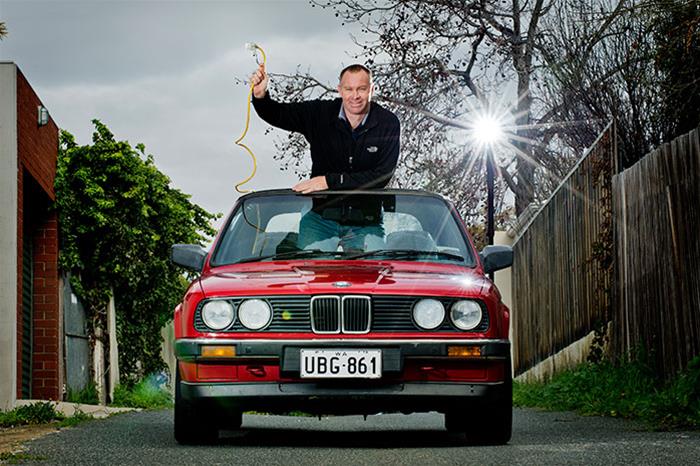 6 Oct, 2014
Web
Electric cars have become even more energy-efficient. So why aren’t we all driving them?

To listen to engineer Malcolm Reeson, he could well be talking about the next gizmo from Samsung or Apple. “It’s like an appliance – you just plug it in, press a button and it works everything out itself. You don’t have to watch it, you don’t have to worry about it, and it will turn itself off when it’s full.”

But what he’s describing is no mobile phone – although the hope is that one day, they’ll be just as common. It’s his self-converted BMW E30 Bauer cabriolet electric vehicle.

Electric cars, Malcolm says, are just like your fridge or TV, in that they have a powerpoint plug that fits into a household socket. The electric current charges the battery overnight so there’s no need to refuel at petrol stations.

“I like the fact that it’s got very low emissions associated with it, and it’s actually a very easy, comfortable car to drive,” Malcolm says of his BMW. “It’s quiet, it’s smooth, it’s even simpler than an automatic – it’s just go and stop. The only things we worry about now are tyres, brakes and windscreen wiper blades. There’s no timing change, there’s no oil, there’s no spark plugs, there’s no servicing needed, it’s easy.”

It costs around $1.80 a day for the electric car enthusiast to power his BMW. Compare that to the $4 average daily petrol spend, and you can see why going electric is appealing. So appealing that the electric car was once labelled the most popular vehicle in America.

The problem is, that was back in 1900. First developed in the early 1800s, the electric car didn’t have the problems associated with petrol cars – vibration, smell, pollution and noise. Unfortunately, when mass production of petrol cars began in 1908, and their prices dropped significantly, electric cars were left eating their dust. Further, their cheap fuel and greater range meant that when it came to petrol power, electric cars just couldn’t keep up. 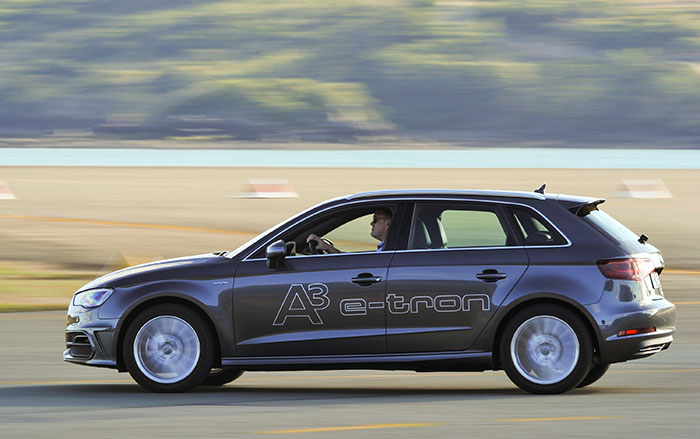 The A3 e-tron, the first plug-in hybrid from Audi, is set for first customer arrivals in March 2015. It has full electric range up to 50km, and up to 940km combined petrol/electric range.

Even when the drawbacks of fossil fuels became apparent, uptake of electric vehicles (EVs) failed to gather speed. “Until the late 1990s, the technology was what held us back,” says Chris Jones, chair of the Australian Electric Vehicle Association’s Perth branch. “Battery technology was still limited to lead acid,
or at best, nickel metal hydride, and they were heavy, they couldn’t put out large currents, they weren’t the best battery chemistry out there.

“Now, EVs use lithium ion batteries that are light and rechargeable by renewable energy such as solar panels, which in effect can make them emission free.

“I can make the fuel that goes in my car, on my roof on a sunny day for free,” says Chris. “If you could make oil or make gasoline on your roof, I think everyone would be doing it.”

And it seems almost everyone is doing it… well, almost everyone except Australia. In recent years, electric cars have taken over roads in America, England and Europe, helped by governments offering electric car rebates and establishing EV-recharging infrastructure. But despite the environmental benefits and cheaper fuel costs EVs represent, the rest of the world is accelerating away from us.

“The main reason why we’re not seeing more EVs on the road at the moment is cost,” suggests Chris. “They are about twice the cost of an equivalent petrol-powered car.” Indeed, while Mitsubishi, Nissan, Holden and Tesla offer electric cars in the Australian market, they all come at a hefty price. The Nissan LEAF pulls up at around $40,000 (compared to less than $20,000 for the Nissan Micra); the Mitsubishi i-MiEV is $50,000 (as against $15,000 for a Mirage), and Tesla’s luxury Model S will set you back a whopping $100,000.

“Cost is certainly a big barrier,” says Malcolm, whose BMW conversion set him back an estimated $20,000 – and that’s not including how much he spent on the car itself. Despite that, he believes that perception, rather than cost, is the biggest issue holding us back from electric vehicles.

“Psychologically, I think people are concerned that if they’re running low they can’t just pull into a petrol station and get more petrol.”

It’s a concern that’s so widespread, it’s even been given its own term: range anxiety. “People overestimate how much they use their car,” Peter Pudney, of the University of South Australia says. “The limited range [of the electric car] is often seen as a problem, in that it will only go 150km on a charge.” In fact, the average electric vehicle is said to have a total travel range of between 100-130km before it is depleted.

But, says Peter, it’s not the problem most people believe it to be. “If you look at how far people drive, the average distance driven around cities is only somewhere between 20 and 30km a day. Very few people will drive more than 100km a day. If you’re regularly driving more than 100km a day, then an EV is probably not for you. But for the rest of us, you can have your petrol car for when you want to do long trips, and when it’s just you going to work, take the clean car.”

Peter, who has spent most of the last decade researching the effects electric vehicles will have on Australians, says other concerns raised by EV sceptics include the increased burden the vehicles could have on each state’s electricity grid. However, his research puts the brakes on these fears. “It’s not going to have a huge effect,” he says. “There’s plenty of spare capacity in the grid as long as we don’t all try and plug in at the same time.”

Stuart Spiedel, from UWA’s Renewable Energy Vehicle project, says it all depends on the rate in which EVs are made, bought and driven in Australia. “There are a lot of arguments that say that it would be really damaging to the grid if a lot of them suddenly appear,” hesays. “It’s happened in the past. In Western Australia, when air conditioners became mass-manufactured, it cost Western Power millions and millions of dollars every year – they had to upgrade everywhere because they couldn’t handle the new load of air conditioners.

“If EVs suddenly all appeared on the roads, you’d have that problem – but the uptake isn’t that strong, nowhere near as steep as Western Power or the grid needs to be worried about.”

Even if there was a sudden surge in electric vehicles, Stuart says there’s the option of ‘charging stations’ – similar to your local petrol station – which would relieve pressure on the grid, could run off renewable energy sources (compared to WA’s currently coal-fuelled electricity grid), and stop range anxiety. At the moment, Perth has a mere 23 such stations. 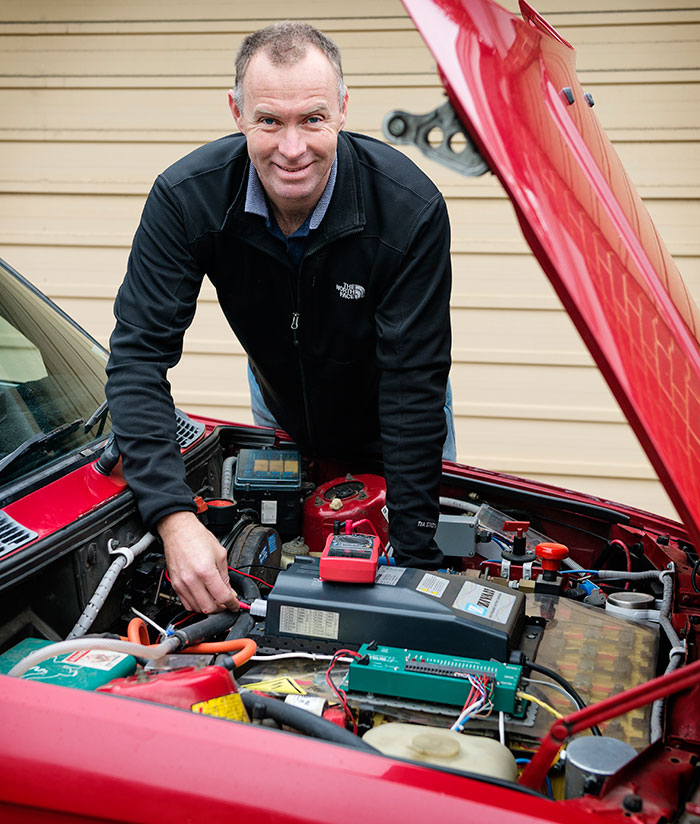 Malcolm gets to grips with his self-converted Beemer.

Unfortunately, according to UWA professor Thomas Bräunl, who was the head of WA’s first electric vehicle trial in 2010, that number will be slow to increase, because we’re stuck with a ‘chicken and egg’ problem. “There’s not enough cars, nobody wants to put in stations, and people don’t buy cars because there’s no stations. At that stage, because the number of cars is so low, we need either companies or private individuals donating money, or the government to step in to say the government wants this to improve air quality in the city, or to improve citizens’ health, and we sponsor a number of stations to get the whole thing kick-started.”

In that case, he says, the uptake is in the hands of the government, which needs to make a move in order for us to progress. According to West Australian Minister for Transport Dean Nalder, that won’t be happening anytime soon.

“While financial incentives to purchase electric vehicles may help alleviate the high purchase price of such vehicles, they will not assist in overcoming the ongoing significant operational limitations of electric vehicles – particularly in regard to driving range, recharging times and the availability of recharging infrastructure,” he says. “The cost of subsidising electric vehicles to a level where they become affordable and result in effective benefits to air quality is likely to be too high for government to provide.”

While the government may not be keen to subsidise the uptake of the electric vehicle, a number of local councils are. Fremantle Council, for instance, has installed recharge stations into the main car park in the port city.

“You get free parking and free charging in the Queensgate car park, to encourage electric vehicle drivers,” says Fremantle Mayor Brad Pettitt. “But I think we need a broader rebate.”

The Mayor, who himself owns a Holden Volt (a hybrid that predominantly runs off electricity), believes it’s only a matter of time before electric cars become the norm. “The motoring industry is slow to catch on, but it’s now happening – you’ve got companies like Tesla actually offering the technology as an open source so anyone can use it,” he says.

That offer came as a blog post (albeit in broken English) called All Our Patent Are Belong To You, a declaration that Tesla, the world’s leading electric car manufacturer, was to give away all its secrets (the book would read: The ultimate how-to guide to electric vehicle manufacturing)… for free.

But why would a multibillion-dollar firm share its key product with the world? As the CEO of Tesla put it, simply “for the advancement of electric vehicle technology.”

That advancement, says Mayor Pettitt, is imminent. “When you drive [an electric car] you feel like you’re driving the future of automobiling… this silent car with no gears that you never go to a petrol station in anymore.

“I was watching Top Gear just a week or two ago, and you realise a revolution is probably underway when two weeks in a row the show tested two cars that were both electric.”

It seems all it takes is for someone to lead the charge.