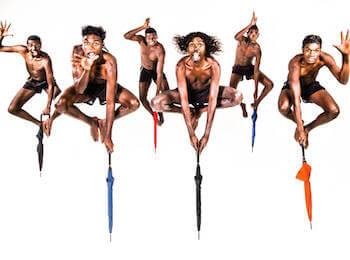 As Djuki Mala returns to tour WA this month, we are re-posting Jenny Scott’s review of their 2018 performance at Fringe World. This production marks eleven years since the group first rose to prominence after a YouTube of their “Zorba the Greek” dance in North East Arnhem Land went viral in 2007.

Originally known as The Chooky Dancers, the Djuki Mala performers have since toured their exuberant dances both nationally and worldwide – most recently winning the Best Dance and Physical Theatre Award and the West Australian Arts Editor Award at the 2017 Fringe World.

The present cast of five performers (with a sixth currently sitting out due to injury) begin the show dressed in white ochre with a moving and elegant display of traditional Yolngu dance using gara (spears) and galpu (spear throwers). The men then shift into show business as they cheekily krump, pop and lock, slide, and backflip across the stage – and of course, perform their iconic “Zorba the Greek” crowd favourite.

With a focus on fun over strict choreography, the gyrating hips, camp shimmies, and infectious smiles of the group truly delight. It’s clear that this year’s show has already attracted many past Djuki Mala viewers, and in classic fringe style the audience are encouraged to noisily show their appreciation. Many in the opening night crowd ended up singing along to the soundtrack, which is a medley of classic hits from Missy Elliot to MC Hammer.

The dance routines are interspersed with intimate footage filmed onsite on Elcho Island, presenting oral histories of the origins and subsequent evolution of the Djuki Mala dance troupe. These videos give past and present dancers the chance to explain, in their own words, the role that the production has played in their lives and in their communities. While this footage sometimes marks a tonal shift from the otherwise lively atmosphere, it’s importance is clear – both in providing the audience with further cultural context for the group, and in paying respect to those who played pivotal roles in its development.

Straddling Indigenous traditions and mainstream Western pop culture, this show provides insight into the lived experience of young Australian Aboriginal people today. It also emphasises the history of clowning and silly dances within Yolngu culture – a detail that has often been lost in Western accounts of Aboriginal heritage. As performer Baykali Ganambarr has said of Djuki Mala, “we take our culture out of the museum and place it very firmly in the 21st century”.

Delightfully dynamic and family-friendly, Djuki Mala will leave you with a smile on your face.

Djuki Mala’s WA Home Run Tour is currently underway. The company will be heading to Ravensthorpe next (Oct 14), followed by

Head to the Djuki Mala website for booking/registration info.