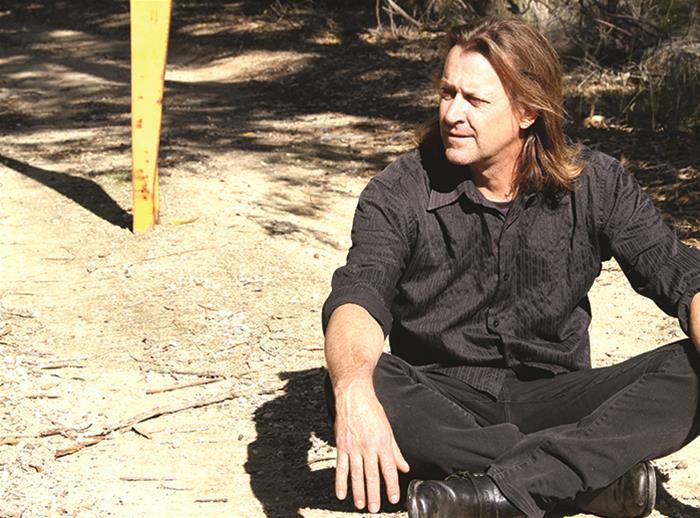 While many people may step over a piece of driftwood buried in the sand, Jon Denaro picks it up with glee. The gatherer, repairer and artist has always recognised the potential in old materials and detritus, once recycled and repurposed.

“I love the magical power of the found object – materials that are old or used,” Jon says. “I love being in the bush, old industrial sites or debris fields on farms, just searching for… stuff.”

The artist takes a ‘once lost, now found’ approach to art making, which has led him to create sculptures that are handmade, rather than constructed with technology.

“I have always enjoyed being in cultures where people repair old things to keep them alive and in use,” he says. “My experiences in Asia and in Persia were influential on my adoption of craft principles, and they consolidated my interest in making sculptural form. Being in places where metal smithing was imbued into the culture gave me an appreciation for the handmade aesthetic.”

Jon has since forged a career spanning more than 20 years, thanks to his biomechanical sculptures, which are the main features in his latest exhibition.

“The title Memory Structure picks up on my ongoing interest in morphology, and on biological ideas to do with memory and cognition,” he says. “When I repair, I believe, for instance, that this is in mimicry of my body’s microbiological actions.
A more essential subconscious level, a universal organic essence intrinsically inspires each action I take. We can see this at the macro level all over the skin of the planet, especially at night time with the electrical grid.

“I am building up dioramas, little iconic clusters of things,” Jon says, of the pieces we can expect to see at the exhibition. “Some are beginning to resemble outback service stations in the bush and the hand-painted signage you see on the fringes. I kind of like the hope they offer to the driver. Cold drinks, fuel, hot food. They are the island’s oasis in the desert.”

The dioramas/sculptures were made using materials Jon found by the Fremantle coast.

“I am collecting metal from the disappearing layers of agricultural farm culture where I live, south of Fremantle, and salvaging maritime stuff like jetty timbers,” Jon says. “I am drawn to old material that expresses evidence of time, and especially any kind of functional use.”

For the exhibition, Jon will go back to his roots.

“My central ambition in this new show is to act as an artist within sculptural language, to explore just being free to construct and respond to form as my artistic nature suggests. I want to explore sculpture as a medium again – as a counter to the prevailing institutional dominance of ‘concept comes first, ethical symbolism’.”