Birdwatching in the South


WA’s South is a biodiverse hotspot with more than 350 species of birds native to the region and a dozen species endemic to the area. Visitors can enjoy sightings of famous Carnaby’s black cockatoos, Western Corellas and friendly pink and grey galahs.

The best area for birds is the southwestern corner of the state, where most of WA’s endemics occur. National parks in the South West and Great Southern are spectacular for birdwatching – try Fitzgerald River, Leeuwin-Naturaliste (for red-tailed tropic birds, although rarely spotted nowadays), and Torndirrup and Porongurup national parks.

Two People’s Bay Nature Reserve is one of the best (and most popular) birding locations. A feature of this nature reserve, the noisy scrub-bird, was believed to be extinct until it was rediscovered in 1961. It’s best to contact a local birdwatcher for locations where they can be found. At Little Beach, you can spot the western whipbird, a threatened species – shortly after sunrise is the best time to see one. If you’re headed to the coast, you can observe species on the rocks such as the sooty oystercatcher and eastern reef egret, along with white-bellied sea eagle and wedge-tailed eagle.

The Eyre Bird Observatory (formerly the Eyre Telegraph Station) is run by BirdLife Australia, who also run the Broome Bird Observatory. It’s a remote site surrounded by Nuytsland Nature Reserve in the south-east corner of the state, and home to some 240 species of bird. The observatory is situated on isolated coastline and visiting twitchers can pre-book accommodation to make the most of locale. Fruit-picking in the Perth Hills

Only half an hour east of the city, the Perth Hills are lush with fruit trees and produce plantations. Depending on the season, apples, avocados, nectarines, strawberries and a variety of citrus fruits are all ripe for the picking. Prefer to buy fresh and support local? Head over to these picturesque family-friendly orchards and growers to pick your own fruit and vegetables for a wholesome weekend or afternoon activity. 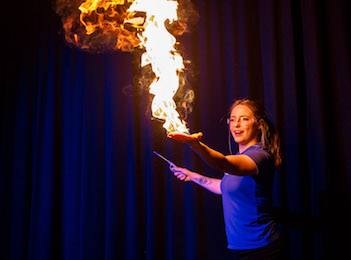 One for the science loving kids, Scitech is hosting a bunch of school holiday exhibitions, events and experiences until January 31, minus Christmas and Boxing Day. Spots are limited so make sure you book your tickets in advance. Check out the program below including an interactive exhibition on climate change, outer space virtual tours and […]

As Perth welcomes in the summer and Christmas rounds the corner, ‘tis the season to get outside and spread the Yule spirit. What better way to ignite Christmas wonder than with a tour of Perth’s magical Christmas light displays? Here are some exciting displays that will have you feeling like a kid on Christmas morning. […]