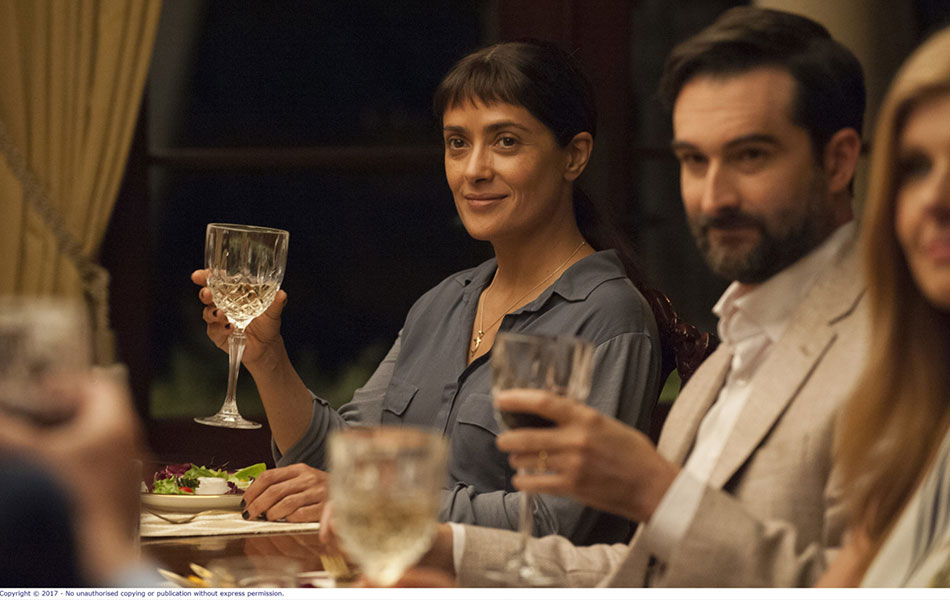 Confronting and thought-provoking, Beatriz at Dinner is an honest exploration of modern society

Mirroring current conversations surrounding the state of global politics, Beatriz at Dinner offers a timely social commentary on the distinction between healers and destroyers.

Finding yourself seated next to someone at dinner with wildly opposing political views is a scenario many can relate to. Beatriz at Dinner takes that premise and uses it to spark conversation about politics, society and social hierarchy.

In the film, Beatriz (Salma Hayek), a healer originally from Mexico now living in the States, finds herself confronted at a swish LA dinner party by the obnoxious Doug Strutt (John Lithgow) a cut-throat billionaire with very little tact and even fewer morals. Having very little in common with her wealthy peers, Beatriz places it upon herself to ensure that she speaks from the heart, calling out the indulgences and self-righteous behaviour of her fellow guests. Her indignant truths spark outrage, and soon the conflict grows into a tense, thrilling investigation of social inequality.

Director Miguel Arteta rightly rests the film on Hayek’s shoulders, with the renowned actress pulling off a heartfelt, convincing performance as the passionate Beatriz. Mike White’s script is witty and humorous, evidenced in Beatriz’s intense verbal quarrels with Strutt, which serve to highlight the distinct difference in viewpoints on issues such as social class and environmentalism. The narrative articulates the issue that businesses places on making a profit, often at the expense of individuals and the environment around them.

Ideas of death and destruction highlight the urgency for promoting the film’s mantra of peace and healing. The character of Beatriz herself symbolises the idea that it takes minutes to break something, but a lifetime to heal it. In a world suffocated by consumerism, her thought-provoking words carry weight as they speak of the consequences of destruction – both financial and environmental – that communities would prefer to ignore.

At times, the main themes of the film are too close for comfort. Arteta and White beautifully critique the toxic political climate that currently engulfs much of the world by exposing it in its entirety on screen. The unexpected conclusion plays on the mind of the audience well past the closing credits, leaving us questioning whether we are all, to some extent, enablers of this injustice through the way we live our lives.

Beatriz at Dinner is on general release now.