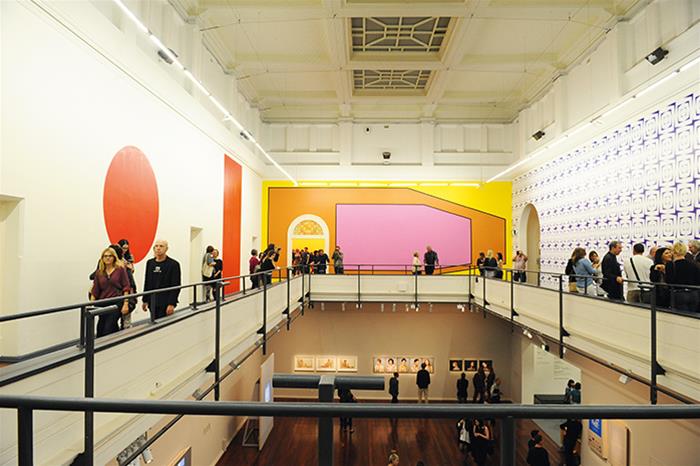 Congrats to Perth Institute of Contemporary Arts, which was awarded the title of Lead Organisation by the WA State Government’s Department of Culture and the Arts (DCA). PICA was ranked number one in the state, beating 67 other arts organisations. In other news, PICA (and Western Australia) bids a sad farewell to curator Leigh Robb, who’s been poached by the Art Gallery of South Australia. 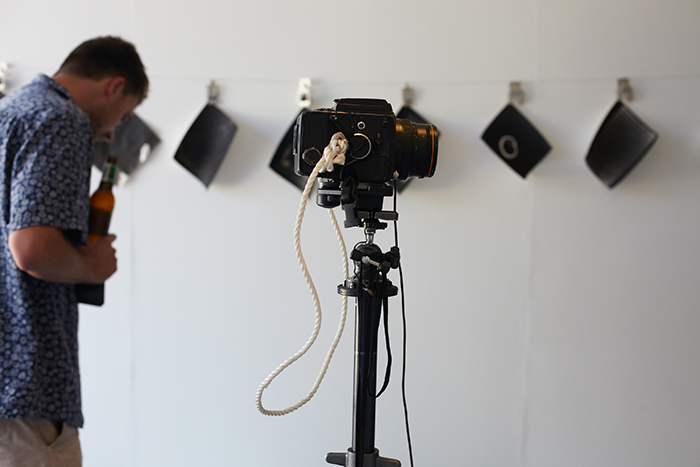 Artist Joseph Landro exhibited his show 12; Regrets (above) at Another project space.

Any artist will tell you it’s hard to come by a good studio in Western Australia, let alone an affordable one. Helping change that is Artsource, which recently launched the Ashfield Artist Studios. The two-storey former Chrysler office has been revamped into 16 individual studio spaces, available on five-year leases. The building also houses the artist-run-initiative Another, a short-term residency space. Ashfield Artist Studios, 174 Railway Parade, Bassendean. Artsource (08) 9335 8366, artsource.net.au. 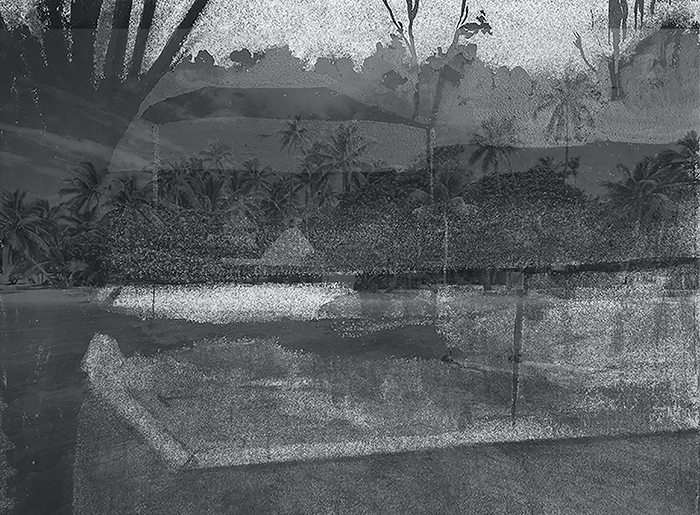 Holiday (near and far) by Fiona Harman (2016). Charcoal and digital image manipulation.

Polygraphics: Walking the Line seeks to explore the accuracy of a polygraph machine and the deceptive nature of lines. The exhibition showcases works by 12 artists, all of whom critique the haphazard line as a disseminator of truth. Perth artist Fiona Harman joins the likes of Clare Peake and Consuelo Cavaniglia to explore this theme – the artist says her works, which focus on what is regarded as the perfect holiday, feature lines that “represent a split between stereotypical ideas of paradise and quick escapes”. Polygraphics: Walking the Line, Central Tafe, May 7-28. 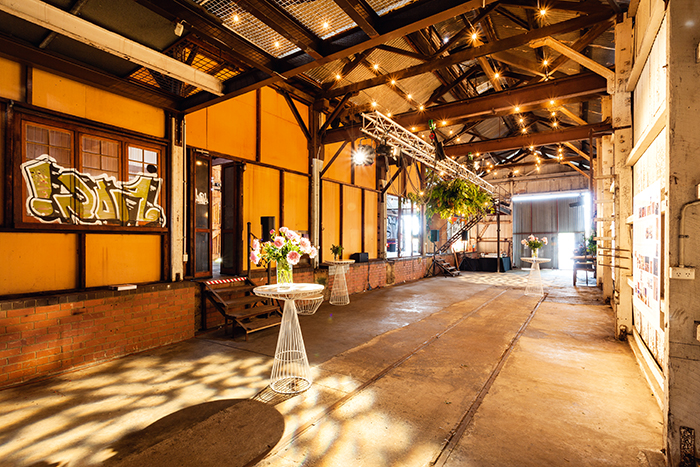 An old station building in the heart of Claremont has been turned into a multi-purpose creative space by arts organisation FORM. The Goods Shed, which was constructed in the early 1900s, has been given a makeover, and now features a gallery, artist-in-residence studios, a cafe and a garden. The building will play host to a program of daily, weekly and monthly events, including creative labs, artist installations, presentation exhibitions, and creative classes. The program kicks off with an installation work by acclaimed Indonesian artist Eko Nugroho, for the launch of PUBLIC 2016. The Goods Shed, ongoing. 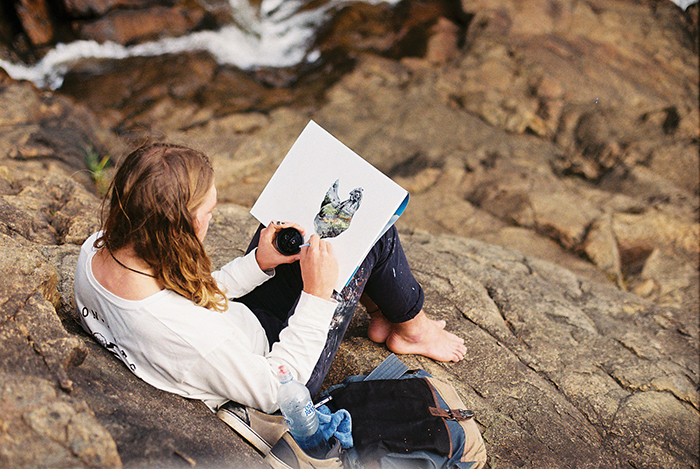 James Giddy’s works meld together the environment and everything it encompasses.

Painting murals in Indonesia, backpacking in Tasmania, sandboarding in Lancelin, hiking in the Darling Ranges, and camping in Dwellingup are just some of the many adventures that have inspired WA artist James Giddy’s practice. “The biggest thing I learned with my travels was not to make plans, but just see what happens and just take it as it comes,” says James. “I aim to share that experience in a medium that encourages the audience to push beyond their initial impressions and look at the greater context of the subject matter.”

James paints landscape images of places he has travelled, and overlaps them with an outline of an animal – a technique that he has developed over the years. “It’s bringing that relationship with two environmental elements – animals and landscape – together,” he says. “I remember first trying to figure out how the layering would work – I would mask off the borders and try to get everything perfect. But then I loosened up and it became so much more natural and organic. It evolved into my style, and painting free-hand reflects the naturalistic element of it all.” The artist says his works have underlying themes, each playing on a deeper, more relatable emotion. However, he recognises the subjective nature of art. “I was once told that how you draw or paint is how you see things,” he says. “And if people like your art then they like the way you see. It’s a nice way to think about it.”

For more information about James and his works, head to jamesgiddy.com.au. 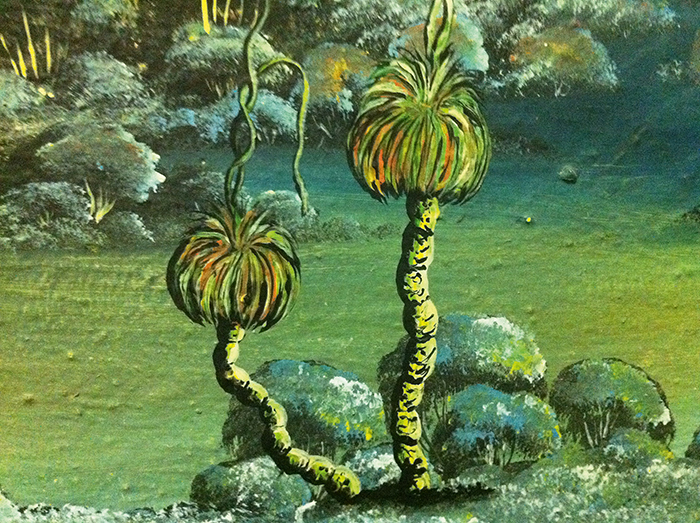 Fremantle Prison’s convicts left more than just ghost stories behind – their artworks still occupy the building’s cell walls and exercise yards. The Fremantle Prison Art Tour showcases illustrations painted by inmates before the prison’s closure in 1991, such as Aboriginal art, European landscapes, graffiti and tattoo art, as well as convict-era art that has been hidden beneath plaster for many decades. The tour runs on the first Saturday of every month. Fremantle Prison Art Tour, Fremantle Prison, ongoing. 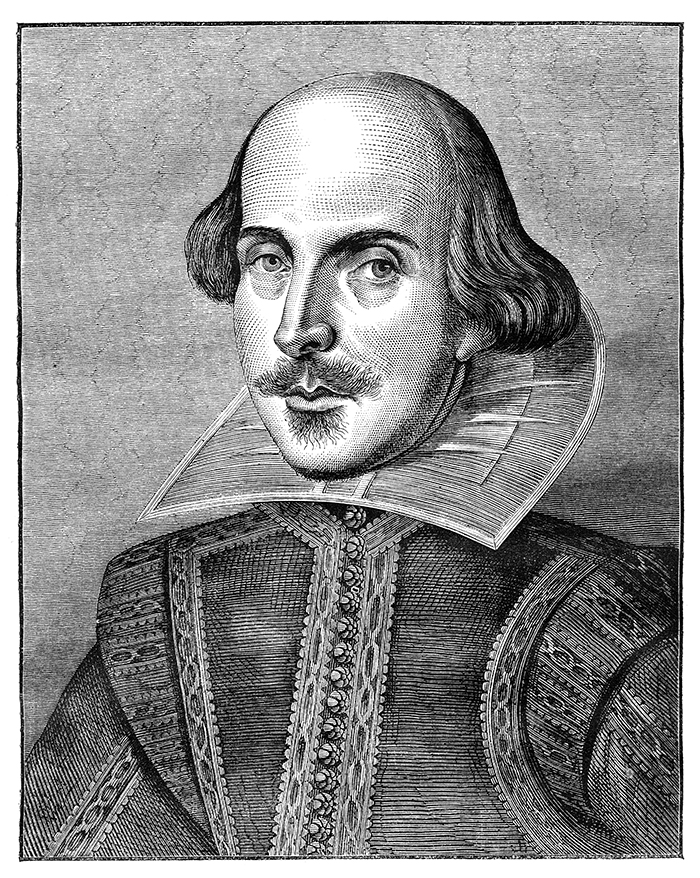 This year marks the 400th birthday of the literary king, William Shakespeare. Lawrence Wilson Art Gallery has commissioned three West Australian artists to produce a video to celebrate. The trio – Andrew Varano, Thea Constantino and J Capone – took inspiration from Shakespeare’s works to create the looped video, which is repeated over and over on the gallery’s 24SEVEN screen. Lawrence Wilson Art Gallery, April 20- December 10. 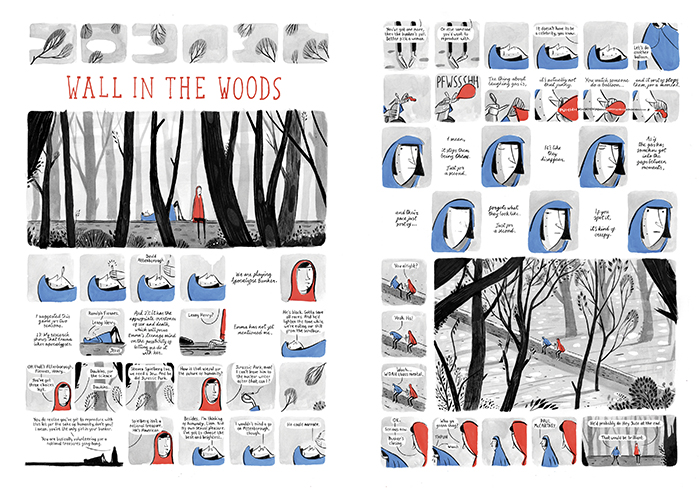 The Art Gallery of Western Australia has released its autumn/winter program. On the bill: a dance-meets-gallery artist residency; a ceiling-to-floor installation; and an exhibition called Comic Tragics. “[Comics] are an amazing art form and quite unique, yet mostly underappreciated, especially in this country,” says exhibition curator Robert Cook. “I thought it would be a good thing to present the work of some of the most interesting, innovative and mature comic artists around the world, and show their work in some kind of detail.” Those artists include Anders Nilsen, Emma Talbot and Tom Parrish, and the exhibition features 20 to 30 works per artist, in various stages of completion. “A lot of the works are covered in doodles, smudges, marginalia, so you really get this sense that it’s an ‘in’ process. For most of the artists, they don’t see these works as being artworks in and of themselves, they see the final book, or the zine being an artwork, but
I think they resonate amazingly as artworks in their own right.”  Comic Tragics: the exploding language of contemporary comic art, Art Gallery of WA, until July 25. 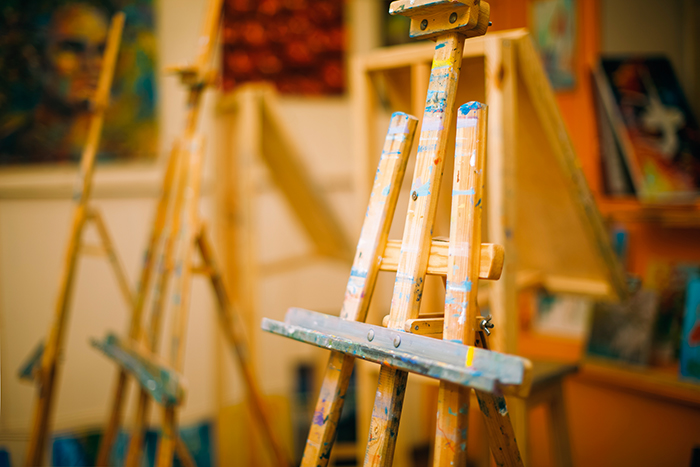 Solo+Co in Subiaco has just become a triple threat, now offering art-jamming sessions at its furniture store and cafe. For $35, you get your own canvas, a supply of brushes, more paint colours than Pantone’s entire spectrum, and free tea and coffee – all you have to do in rock up and… jam. “Art jamming is a social creative experience where anybody and everybody can release their inner artist,” says Solo+Co owner Kelley Fergus. “You don’t have to be artistic, and that’s the point!” If you want to dip your toes in the more shallow end of the pool, however, Solo+Co will be offering a number of art classes throughout the week. Art Jamming, Solo+Co, ongoing, soloandco.com.au. 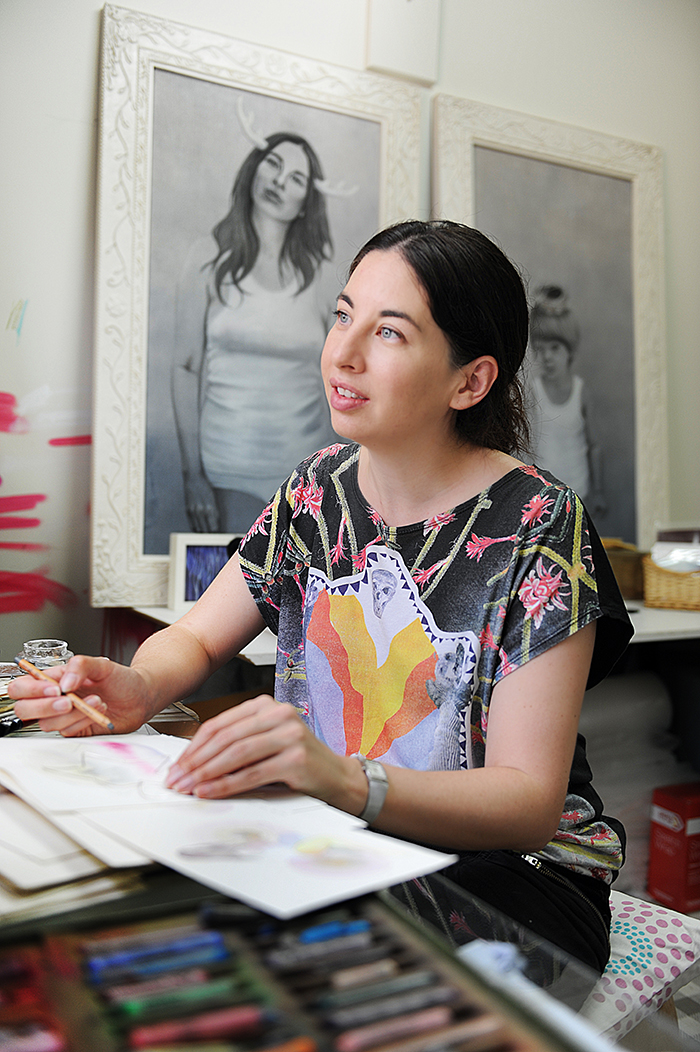 We talk to the WA artist about her upcoming exhibition and its inspiration.

What influences your artistic practice?
[My] artworks often reflect upon feelings of love and loss that are felt towards the physical homes of our childhood, as well as the psychological space that the idea of home occupies. I moved a lot growing up, and I am often aware that my paintings are describing the memories of the places from my childhood. I am still influenced by what goes on at home, I guess, and I am inspired every day by my seven-year-old son, my talented husband Campbell Whyte, and also now our latest family member, a Xoloitzcuintli dog called Citlali. Artists who inspire me include Kiki Smith, Frida Kahlo, Leonora Carrington, and my painting teacher
and mentor Gregory Pryor.

You were recently in Florence, developing your practice…
I received a grant to help me attend a painting course at the Florence Academy of Art, where I learnt the specific techniques used by artists such as Rembrandt. While there, I was able to study closely the original works of some of my favourite artists, like Rachel Ruysch and Giovanna Garzoni, who are at the Pitti Palace.

Tell us about your latest exhibition, Love Spells for a Thief.
A large amount of my artwork was stolen in 2013, and I have since been planning a series of painted love spells for this unidentified thief. These love spells are painted on hexagonal panels of wood, and incorporate the symbols that I have developed in my practice, as well as some of the mundane personal items
that were stolen. I’m hoping to leave the viewer spellbound with a mixture of delicately rendered and highly detailed miniatures, some large-scale hexagonal shaped paintings, and an immersive hive-like installation of the love spell paintings. 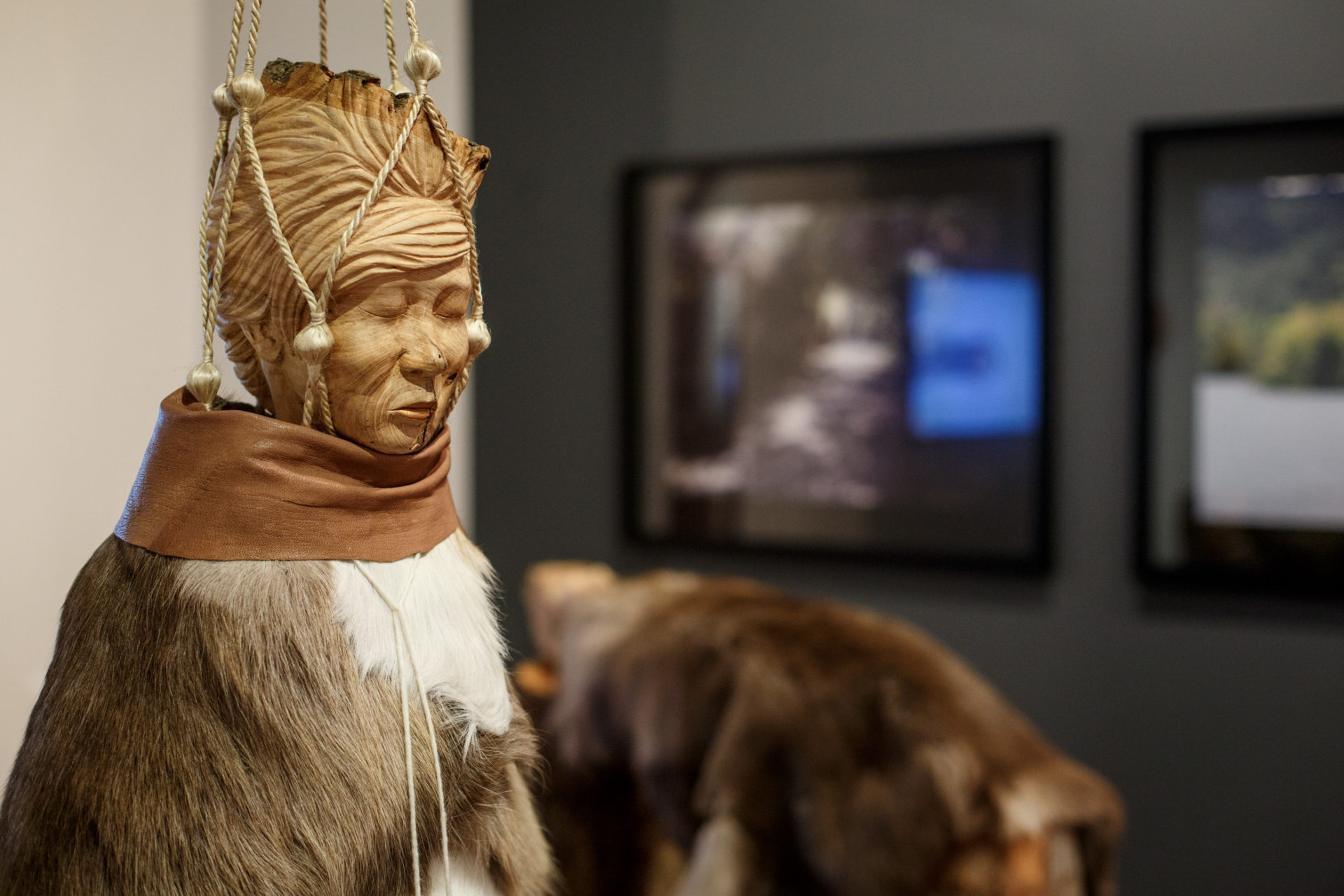 MANY 6160 in Fremantle is now home to one of Perth’s largest contemporary art spaces, Success. The gallery, officially opened in February by MOANA’s Dale Buckley, can be found in the basement of the MANY building. It presents cutting-edge visual art and performance from international and Australian artists across its 2800sqm of floor space, including shows for the Perth International Arts Festival. Check out successarts.org for upcoming shows and exhibitions.