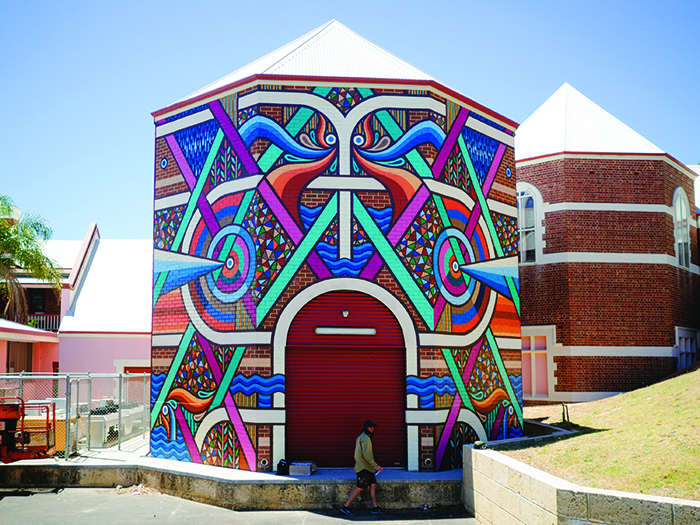 ReDiscover Bunbury is back for a third year, bringing with it a blockbuster lineup of street artists. On the bill: Vans The Omega, RONE, Anya Brock, Chris Nixon, Hayley Welsh, Beastman and many, many more. Along with individual murals, 10 West Australian artists will collaborate to create a massive work of art on a 60m-laneway wall.

“What they create is completely up to them,” says ReDiscover founder Andrew Frazer. “Their unique style, approach and practice is something that we don’t want to restrict.” 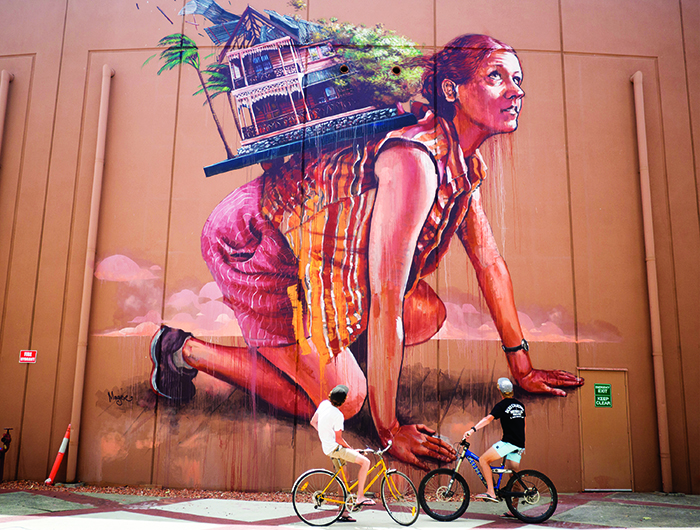 Andrew says he always wanted to give back to the greater Bunbury community in a significant way, and ReDiscover was the perfect way to do so. “I’ve loved seeing how people have responded to the art and how it has been a catalyst for
a strengthened sense of community.”

The Bunbury local says his favourite artwork to date is by Beastman (above).
“Being able to have Beastman paint the angular walls of the Bunbury Regional Art Galleries for ReDiscover 2015 was incredibly unique, and the outcome was absolutely stunning,” he says. “Person after person have commented to me on how much they love walking to work, coming over the hill and seeing Beastman’s artwork. It has given the space a new sense of life, and encouraged people
(locals and visitors alike) to explore the Bunbury CBD in a fresh and exciting new way.” 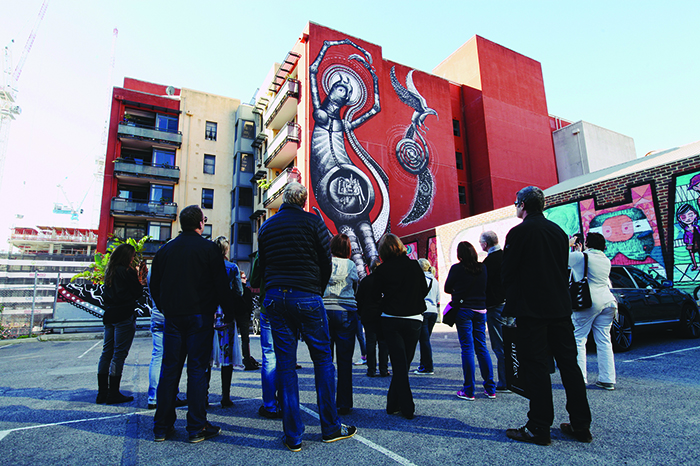 Want to check out the best of Perth's urban art? Book yourself a walking tour.

1. PUBLIC Urban Art Walk Not-for-profit group FORM is the driving force behind the bursts of colourful street art that are slowly engulfing every free wall in our city. The same force also runs professionally guided walking tours showcasing a number of murals from the campaign, and the story behind each. form.net.au.
2. Oh Hey WA Art Tour The viewing needs of contemporary and traditional
art lovers are covered by Oh Hey WA’s art tour, which takes walkers from street art to fine art, and then straight to the bar after. ohheywa.com.au.
3. Ainslie Gatt’s Urban Art Walks Did you know that every year the Town of Cottesloe purchases an artwork from Sculpture by the Sea? Find out where they’ve put them all, on one of Ainslie Gatt’s walking tours. urbanartwalks.wordpress.com.
4. Artsource’s Art Crawls These take the traditional pub crawl concept and
inject it with art. The gallery-hopping event will better acquaint you with some
of Perth’s best galleries and the contemporary visual art that fills them, all with a wine glass in hand. artsource.net.au/Events/Patron-Events/Art-Crawl. 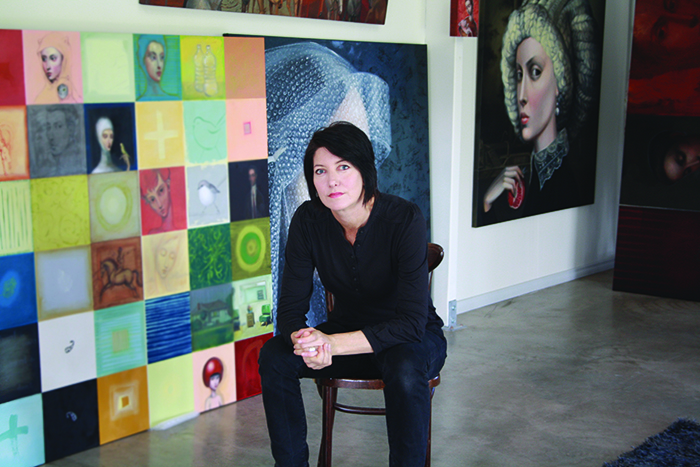 West Australian artist Lauren Wilhelm explores the changeable nature between what is revered and what is disposable in her latest exhibition, Suburban Intrigue.

Inspired by history and man’s seeming refusal to learn from it, artist Lauren Wilhelm uses a painting style reminiscent of old classics to present an often sinister and wry portrayal of our everyday lives.

“I have been told that my work evokes feelings of melancholy and reflection but, of course, it’s so personal for each of us,” Lauren says. “By referencing the style of the classical ancestral portrait and including an animal which doesn’t have historical symbolism and/or is quite commonplace, like a guinea pig or a pigeon, I’m commenting on the frailty in all of us, humans and animals alike.”

Horses and other animals feature a lot in her works, where she shows the similarities and stark differences between the animal kingdom and the human domain.

“Humans are the only mammals that experience ‘Status Anxiety’,” she says. “From aristocrats displaying portraits of wealthy ancestors, to people keeping up with the right kind of car, we spend our short lives stressing over how we’re viewed. One can only question the superiority of humans over other animals when you consider the quote by Dale Carnegie: ‘One reason why birds and horses are happy is because they are not trying to impress other birds and horses’.” 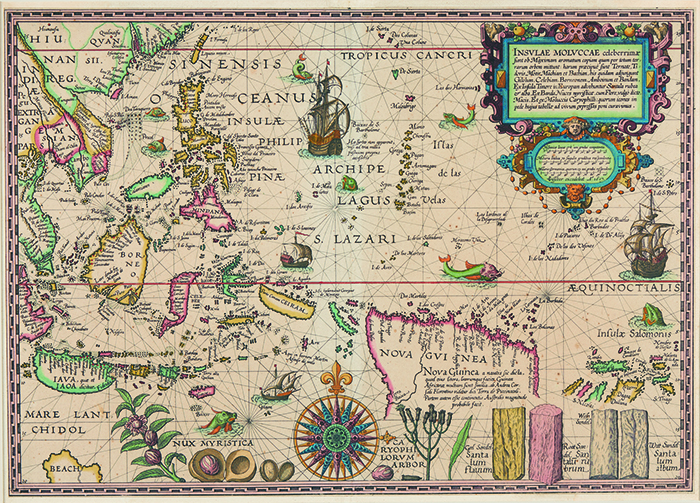 The Art Gallery of Western Australia’s Treasure Ships: Art in the Age of Spices is about to get a whole lot spicier, thanks to the 2016 opening of the Gallery’s rooftop bar. Be there on January 22 and 29, as the bar serves up food and drink inspired by the popular Treasure Ships exhibition. It will then reopen every Friday night in February for Ryan Trecartin’s debut Perth exhibition, 6 Movies. Ryan’s films, including Sibling Topics (section a) (2009) and CENTER JENNY (2013) will be running back-to-back from January 31 to May 8.

The Perth International Arts Festival (PIAF) is back in 2016, with explosive new attractions. We ask the Festival’s Visual Arts program manager, Margaret Moore, for her must-see exhibitions.

THE SECRET GARDEN
The Secret Garden by Swedish artists Nathalie Djurberg and Hans Berg opens up a netherworld of strange delights and encounters. In this immersive landscape, sculpture, light, sound and film combine to dazzling effect, as gallery visitors are thrust into a mysterious world of feverish dreams, psychedelic sunsets and expanding universes. PICA, February 11-April 24. 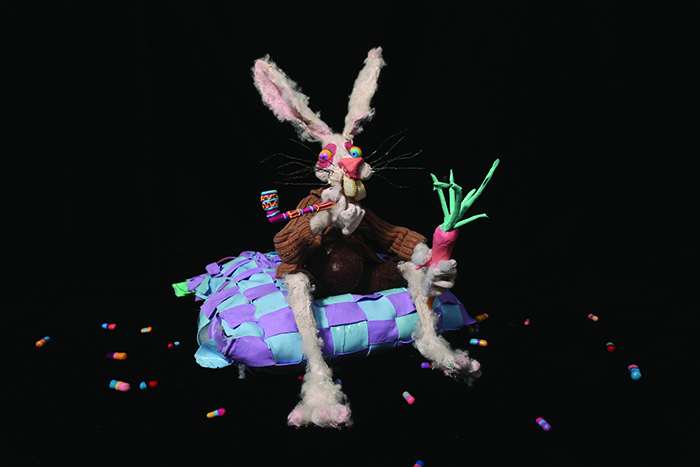 The Secret Garden, 2015 by Nathalie Djurberg and Hans Berg.

IN HER OWN LANGUAGE
In her first solo exhibition in Australia, internationally recognised artist Bharti Kher offers a window into her richly textured practice. Her distinctive signature application of saris, bindis and moulded forms is part visceral and part allegory, stemming from the pulse of her New Delhi studio, and informed by a curious and cognisant imperative. Lawrence Wilson Art Gallery, February 18-June 13. 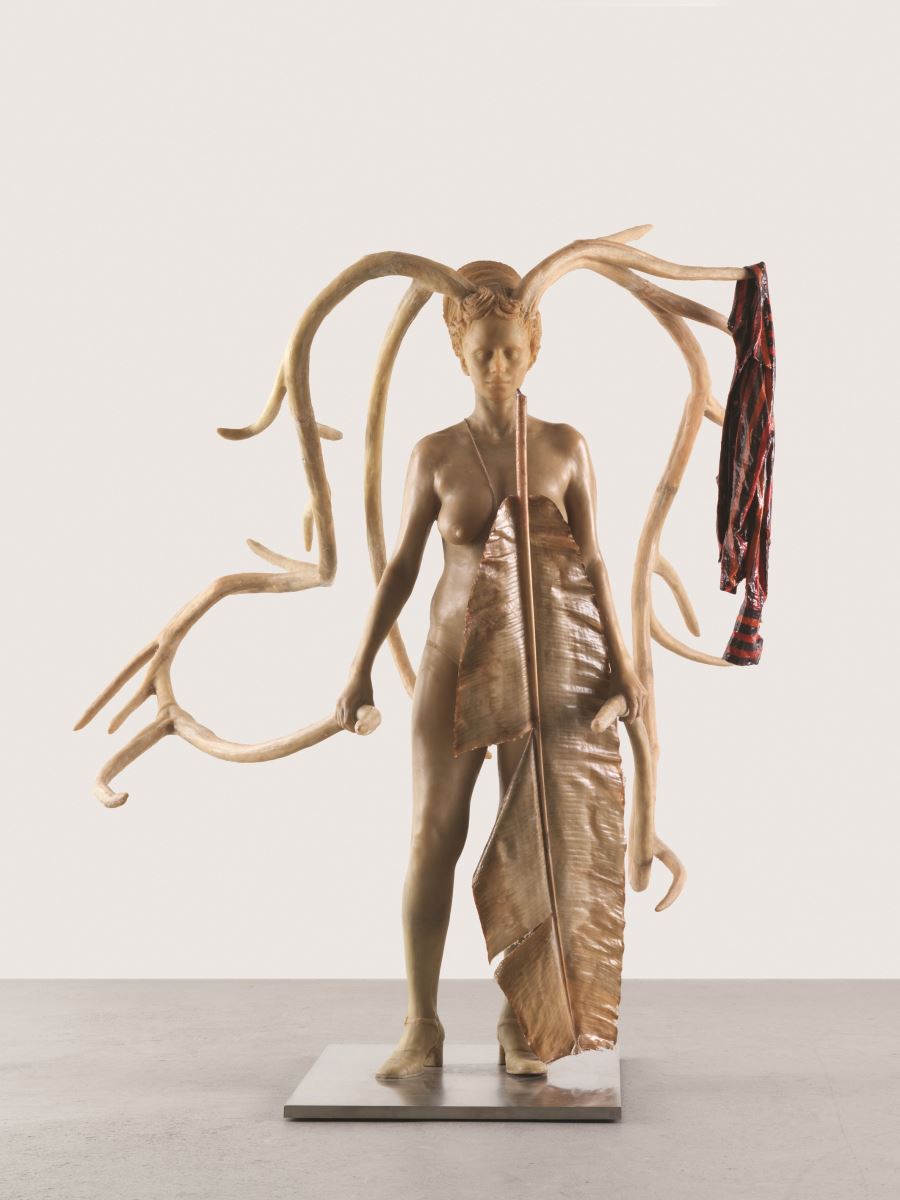 Warrior with Cloak and Shield, 2008 by Bharti Kher.

BLACK SUN
Dani Marti is one of Australia’s most challenging and exciting contemporary artists. Including a generous offering of new and previously unshown hand-woven canvases, audio and video works, Black Sun – Marti’s first solo show in Western Australia- is both seductive and confronting. His works are intense in their scrutiny, alive in their passion, and ask poignant questions about sexuality, intimacy and the efficacy of relationships. Fremantle Arts Centre, February 7-March 28. 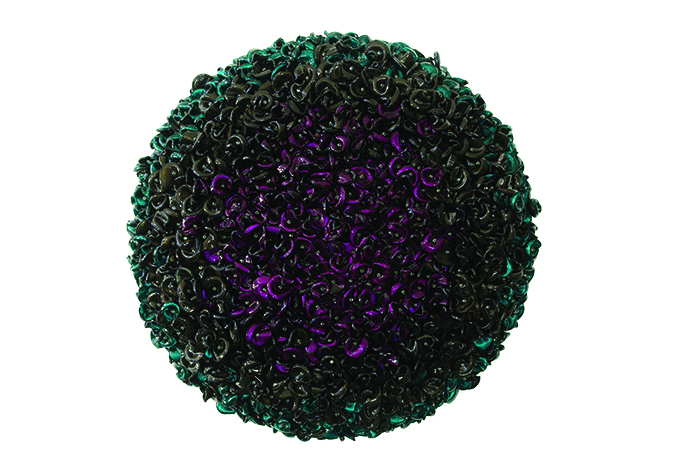 FACE TO FACE
Face to Face juxtaposes multi-faceted works by three distinguished artists: Shaun Gladwell, Carsten Höller and Jon Tarry. It is the first time Höller has exhibited work in Western Australia, and it also premieres new work from Gladwell and Tarry. In dedicated gallery spaces, the work of each artist provides a dialogue between sound, image and the viewer. John Curtin Gallery, February 14-May 1. 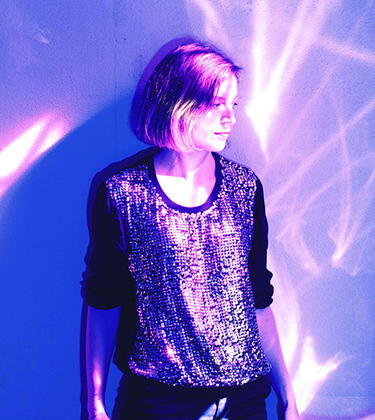 How would you characterise your artistic style?
My works can be characterised by their materiality – I predominantly use everyday objects and industrial colour. My work also often involves kinetic activation, or an innate element of change.

Do you have a favourite art piece?
It’s hard to choose a favourite, as they all have their place in my creative ‘evolution’, so to speak. In saying that, though, Automated Colour Field is a stand out work for me, as I was able to resolve a number of ideas I had been playing with for a while.

What is your Manoeuvres exhibition all about?
It’s about the choreography of colour, light and time. I take these devices, which are normally used to display information or advertising, and remove that ability from them. Through this process of material intervention, I hope to transform them into something experiential, leaving the viewer to consider their own relationship to the object.

What can people expect to see?
For the exhibition there will be two installation pieces: Once More With Feeling is a work which utilises a tri-vision billboard. As the iridescent prisms turn, kaleidoscopic light effects transition throughout the gallery. Manoeuvres uses a series of flip-dot displays in a spatial constellation throughout the hallways and galleries of FAC. I am programming them in order to create a ‘chromatic narrative’. As you move through the installation, your experience will be altered as you encounter the work from various positions within the gallery. The flip dots will be in constant flux and, depending on the arrangement, the work will alternate between being gentle, to an overwhelming experience. 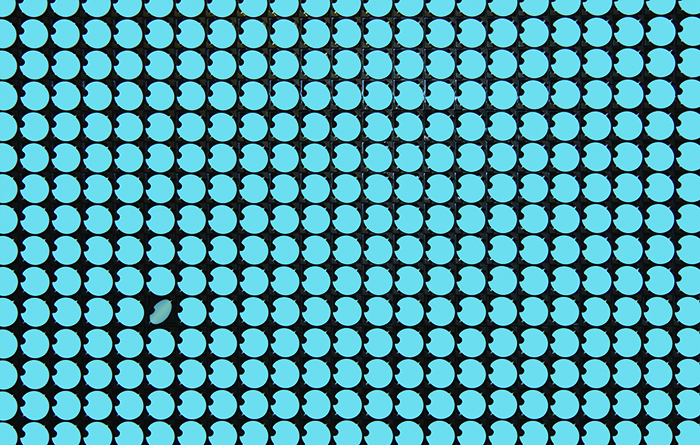 Sculpture by the Sea (SXS) is lauded for its ability to connect a wide audience to art, but it should also be recognised for its support and promotion of our local sculptors, including Perth’s Norton Flavel and Jina Lee.

“Lots more people know about my work, and that’s really something that I couldn’t have achieved by showing my art in conventional art galleries in the same time frame, if ever,” says Norton. “It’s really been an amazing boost, because before SXS, a few people in the local art community knew me, but within 24 hours of installing my first work at Cott, I was receiving calls from local and international media. The average West Australian/Australian wouldn’t really go out of their way to attend an art exhibition, but they’ll make their annual pilgrimage to SXS and I think that’s pretty special.” 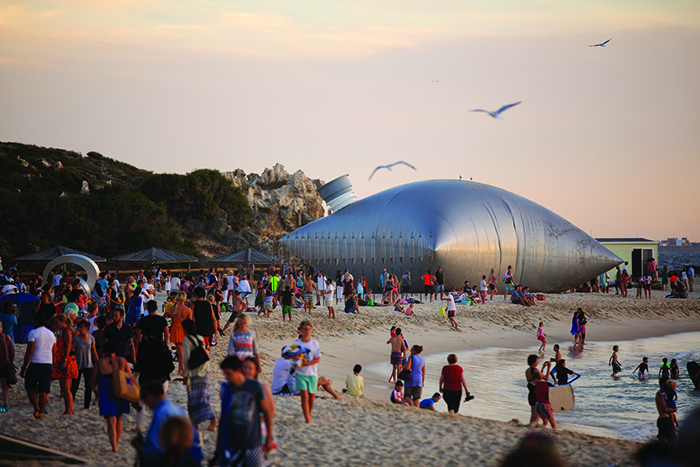 Jina agrees, saying that SXS plays a vital role in the development and continuation of the sculpture industry and culture within WA. “SXS is extremely beneficial in allowing both emerging and established artists to develop and gain experience exhibiting at a world-class event,” she says. “For the artist, SXS is a great way to gain exposure for their work. I also feel that SXS provides an experience to the audience that is unavailable anywhere else in WA. People visit the exhibition as part of a picnic at the beach; it is nice to remind people that art is not too far away from daily life.”

Catch Norton, Jina and other artists’ sculptures at the 2016 SXS. 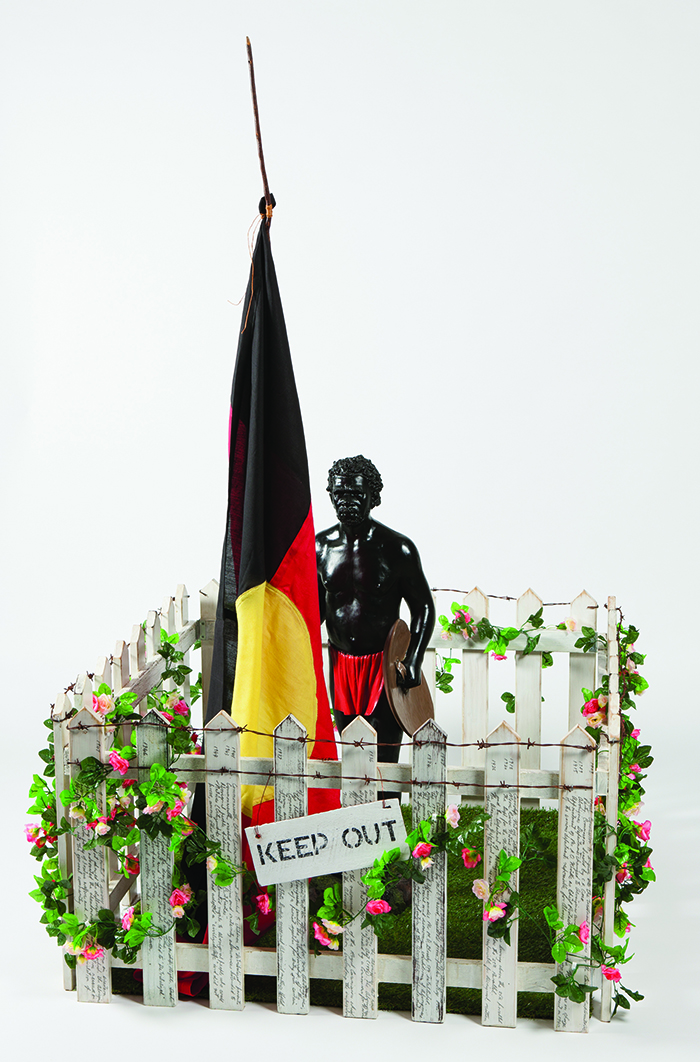 A big congrats to West Australian artist Sandra Hill, who took out the 2015 West Australian Indigenous Arts Awards People’s Choice Award in October. Sandra’s works examine the effect the Australian Government’s assimilation policies had on the lives of Aboriginal families, particularly women, during the 1950s and 60s.