17 Jun, 2015
Web
Proving that a home is more than just bricks and mortar, this Bicton home was constructed without using bricks at all.

Carved into the side of a steep limestone hill, and featuring sprawling white interiors over seven levels, this family home emanates a modern, minimalist style with a futuristic twist. The main lounge features Ralph Lauren armchairs and coffee table,
a lounge suite the owners imported from a maker in Italy, an 18th century French antique console table beside the fireplace, and art by Brett Whiteley.

An impressive art collection and uncompromising designer flair in furniture and fittings make this home unique in itself. What may come as a surprise, however, is what lies beneath its pristine facade.

“This home doesn’t contain a single brick, which is unique on the Perth building landscape,” says Drago Bacic, director at the Bacic Group, who built the home. “The entire home was built with concrete but is wrapped in stone, glass, timber and render to give it a lightness and warmth.”

Drago is a great admirer of Frank Lloyd Wright’s style, being heavily influenced by his experimentation with concrete and his philosophy that homes strongly influence the people who inhabit them.

“He believed an architect is the moulder of men,” says Drago. “Legend has it he would even design the gowns of his clients’ wives. He didn’t simply aspire to design a house but to create a complete environment.

“When he died in 1959, the project on his drawing board was a simple and affordable prefabricated concrete house,” he says. “We’re still catching up with his vision.” In the modern, white kitchen, a Gordon Richards painting livens up the backdrop, which is comprised of a splashback from European Ceramics, Gaggenau appliances, and kitchen cabinetry by designer Jesse, imported from Italy.

The Bicton project was the first custom home by the Bacic Group, an innovative boutique outfit founded by builder Drago, his engineer brother Anthony, and interior designer and client manager Elvira Nuic. And in cutting their teeth on the riverfront beauty, the trio were also honing their image as concrete aficionados.

The owners – a private couple with three children and three young grandchildren – created the design concept themselves, and were heavily involved in the selection of the final finishes. “They have impeccable taste, and the creative collaboration made this journey an enormous delight,” says Drago.

The original house had undergone three major transformations in the past. This time, the owners decided on something radical for the site, which offers 180-degree views of the Swan River.

They originally looked for a new home or block of land, but soon realised no other location was quite as beautiful as the one they already had. “After 23 years on the site, we knew the location intimately, from the influences of the wind, to the sun and the rain,” says the owner. “It informed the design and helped us plan a house that flows well and is incredibly easy to live in.” Concrete Ice flooring tiles from European Ceramics were used throughout the home. In the second lounge, they create a clean setting for a cabinetry-encased Real Flame fireplace from Subiaco Restoration, and the lounges sourced and imported from a maker in Italy.

“While the new house is grander than the original, what’s interesting is that the floor plan shares many similarities with the original layout,” says Drago. “It’s just a more spacious, contemporary interpretation.”

Much of the furnishings and finishing touches were sourced overseas by the owners, while their art collection is a who’s who of lauded local artists. So the art could take centre stage, a minimal and light colour palette was used throughout.

“Our collection includes work by Brett Whiteley, Gordon Richards and Robert Juniper, but it’s hard to pick a favourite because we enjoy them all!” says the owner. “For us, it’s about how they fit together as a collection, and the stories they tell – they’re all our little treasures.” 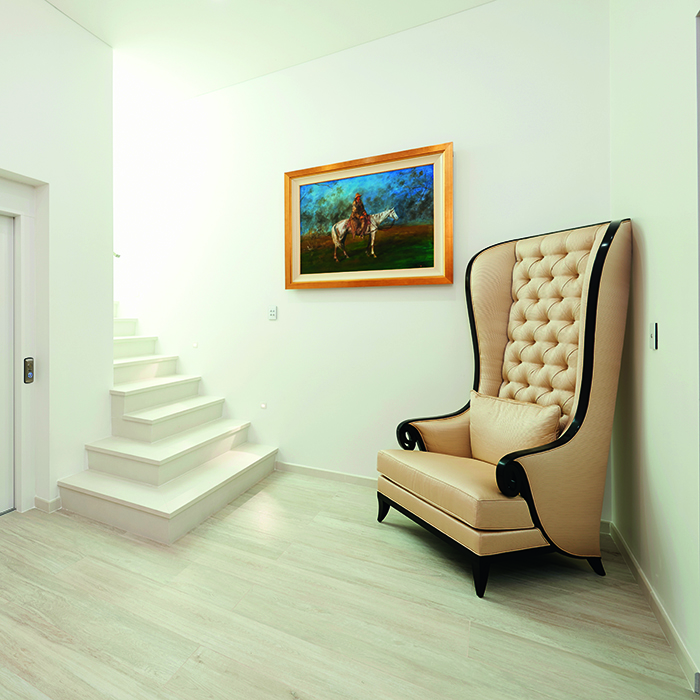 A corner-positioned Christopher Guy armchair in neutral upholstery affords the opportunity to contemplate the Robert Juniper painting in the stairwell.

The block is perfectly oriented to take advantage of the northern aspect and uninterrupted river views, however it did come with its own set of challenges. Drago says the site rises 14 metres from the road to the back boundary, and 125 semi-trailer loads of limestone had to be removed before construction could even begin.

The dominance of concrete saw speed and versatility prevail, allowing the 935sqm structure to be built in just nine months. Rather than the more common tilt-up method of construction, Drago says they used Insulated Concrete Form (ICF) walls.

“These are very different, as the formwork (in this case, fibre cement sheets) is delivered flat-pack to site, where it is erected, braced, and the concrete poured in situ,” he says. “What concrete allowed us to do was take full advantage of the site, push the engineering to its limit, and deliver this build in a timeframe many would have considered impossible.”

The experience with this project prompted the Bacic Group to bring out their own system for concrete walling, bWall. It features fibre cement sheets and an insulating foam layer, connected using revolutionary, patented technology to form a concrete-filled cavity wall. It’s something that will appeal to savvy Perth homeowners, says Drago. Capturing the views was a directive for the design, so each room seeks to capitalise on the magnificent 180-degree vista of the Swan River.

“What’s exciting is that insulated concrete homes are no longer just the domain of the wild architectural innovators. We’ve reached a tipping point in WA, and homes like this are the early adopters, helping unleash the idea of alternative materials and making insulated concrete walling systems more accessible and affordable to the general public.”

Certainly, what the Bacic Group has achieved is in line with Frank Lloyd Wright’s ethos, with the home influencing the way the owners go about their day. “The different zones make the home incredibly adaptable and easy to live in, whether it’s just the two of us, or we have family and friends over,” says the owner. “There are zones for relaxing, like the theatre and study, and others for coming together and entertaining, like the pool cabana or cellar.

“We are so happy with what we’ve achieved here, particularly the peacefulness and tranquillity. It feels like a resort, away from the hustle and bustle of life.” A spa tub soaks in views of the river, with the bath, vanities and fittings all handmade in Italy by Ceramica Cielo. The 320kg Italian stone bath had to be craned into the master en suite. 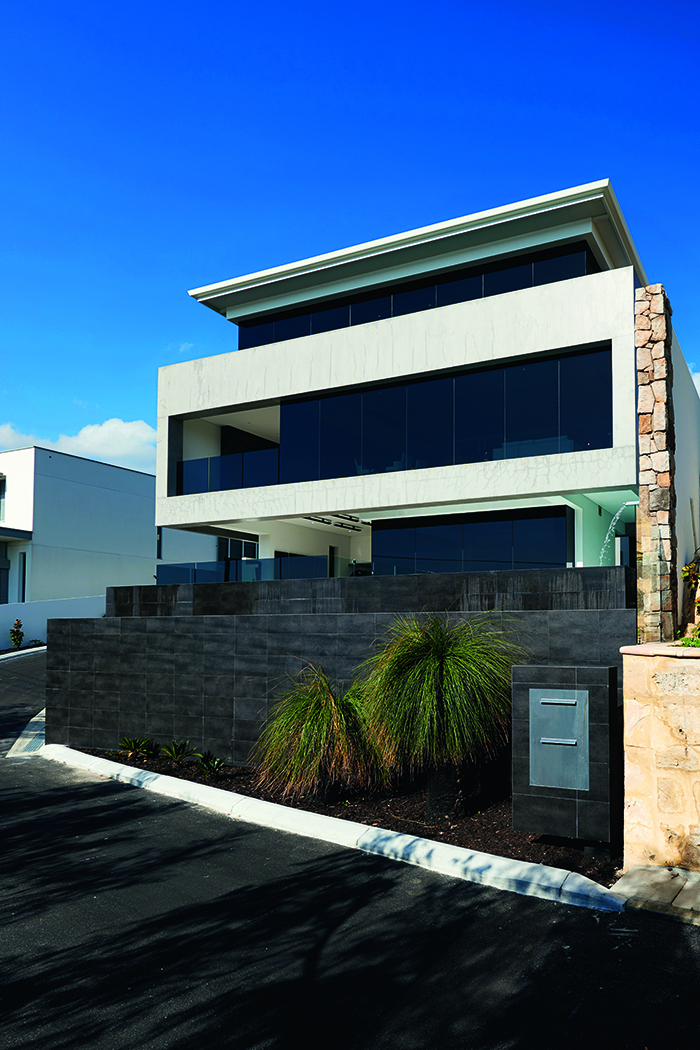 Given the view was so important, the entire 16m facade was engineered to span without a single column, allowing for an expanse frameless glass throughout the main living area. The 26m edgeless pool was built as part of the structure, with the same concrete system as the walls. Bacic used a Xypex additive to make the concrete watertight, and applied a Duraquartz pool render at the end. 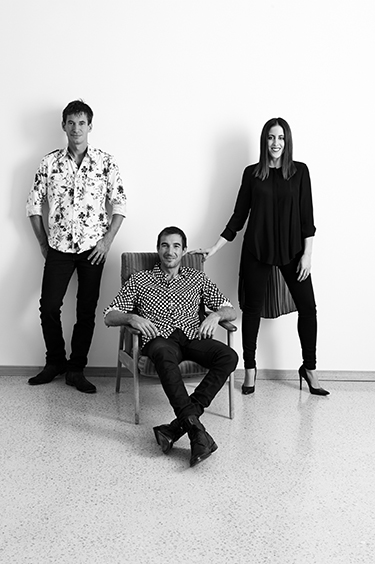 Why concrete?
Concrete delivers lower life-cycle costs by minimising ongoing repairs and maintenance, and it lasts. This is the stuff the Romans built their empire with! We have built concrete homes and commercial structures for many years, but with every system we tried, we found ways it could be improved. After this build, we finally committed to launching bWall, which is our own insulated concrete walling system.

What do you love about the building business?
We’ve dreamt of building houses since my brother and I made our first treehouse as kids. We’d raid dad’s tool shed and use scraps off building sites. There were many versions built over the years, each larger and hidden higher up in the treetops. It’s serendipitous that the riverfront playground where we built treehouses as kids is just a short dinghy ride from the location of our first custom-build in Bicton.

This Bicton home is a spectacular first project!
The greatest reward from this project is our relationship with the owners. They are visionary and incredibly clever, which made this creative collaboration a great joy.